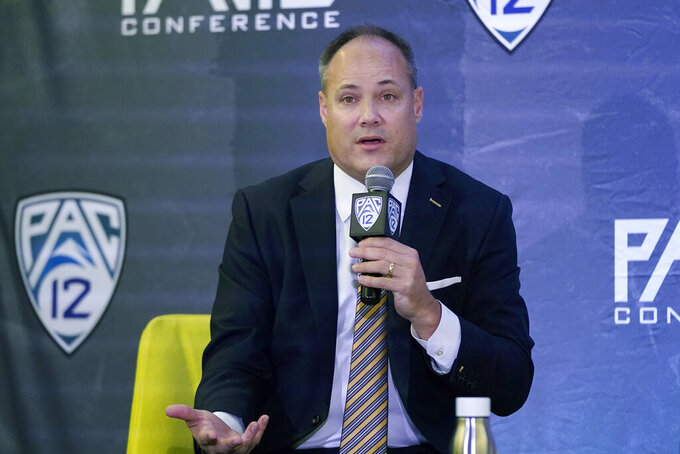 Still, Fox is focused on the players he does have and looks forward to finally having the depth so his Golden Bears can play more up-tempo basketball.

One of those key faces is Grant Anticevich, a fifth-year senior from Australia who opted to stay put in Berkeley for one final season.

“Experience goes without saying, it makes your team better,” Anticevich said. “I think it’ll be really evident when we start playing games.”

Cal is ready for more time to bond as a team given that all was taken away because of strict protocols last season. And nobody is complaining about the extra work such as weightlifting.

“These guys have a grateful approach to what they’re allowed to do every day because last year a lot of it was taken away,” Fox said. “The response I've gotten from this year's team, the guys that returned from a year ago, has just been that they're grateful and they've really continued to battle forward and that's created an environment within our team that I think will allow us to improve.”

The Bears finished 9-20, including 3-17 in the Pac-12, and were picked to finish last this season in a preseason media poll.

Now, they will try to prove people wrong.

Bradley averaged 18.0 points for Cal last season and was the team's second-leading rebounder, so those are big shoes to fill.

“With our group as we’ve tried to develop our team, we played a little slower the first couple years because we maybe weren’t as deep talentwise,” Fox said. “In our game, teams are better when they play together. This is going to be a team that we need to have scoring across the lineup. I think we have enough depth and athleticism to play a little quicker. I think that’ll result in hopefully a good offensive group.”

Andre Kelly is the leading returning scorer, having averaged 10.3 points, and led Cal in rebounding averaging 6.4 boards, while Anticevich scored 8.9 points per game.

"Having an older team I think it keeps a team more stable and steady," Kelly said.

Grad transfer Jordan Shepard, who played for the University of North Carolina at Charlotte, will provide some immediate offensive punch.

“He’s a very instinctive player, he has the ability to score the ball but he makes everyone around him better,” Fox said. “I think he’ll make an immediate impact on our team.”

Fox is working three freshmen into the mix. Guard Marsalis Roberson and forwards Obinna Anyanwu and Sam Alajiki will likely see action in the talented Pac-12.

“There are times they’re as wild as Friday night,” Fox cracked. “They have really bright futures. I think they’re going to be really impactful players for us. You mix in Jordan’s experience and they’re going to improve our team.”

Fox will be counting on Anticevich's presence both in the paint and in the locker room guiding his young teammates.

With all the interruptions and struggles through COVID-19, he had unfinished business in college basketball.

“Given the situation I wanted to spend another year at Cal playing for coach,” he said. “It was a pretty easy decision to make to stay one more year.”

Fox tried to be mindful of keeping his team together through the down days of COVID, noting “we had some significant mental health challenges last year.”

The Bears never had a team meal together, changed in the locker room together or had a regular film session.

“The isolation of all those things, then to compete with no fans, it was a challenging year,” Fox said. “Not being able to bond impacted our team to a significant degree.”