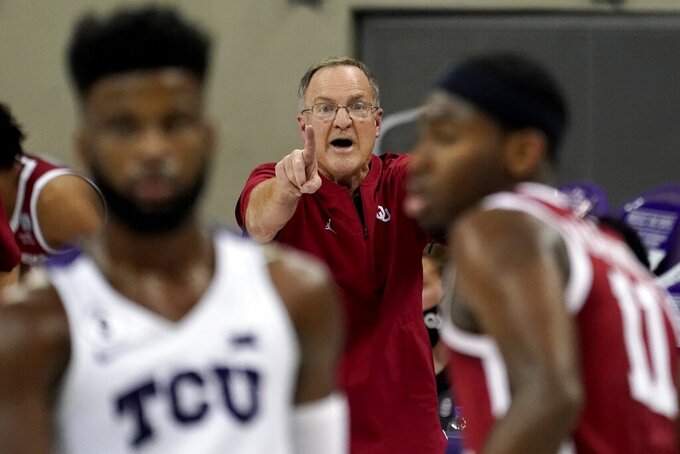 Oklahoma head coach Lon Kruger, center, instructs his team in the second half of an NCAA college basketball game against TCU in Fort Worth, Texas, Sunday, Dec. 6, 2020. (AP Photo/Tony Gutierrez)

FORT WORTH, Texas (AP) — Austin Reaves scored 32 points with six rebounds and a career-high nine assists and Oklahoma beat TCU 82-78 on Sunday in the first Big 12 game of the season.

Reaves sank a deep 3-pointer, on a broken play with the shot clock winding down, to give Oklahoma a 79-74 lead with 55 seconds left. Then Alondes Williams grabbed a key rebound and Brady Manek put in the second-chance bucket for a four-point lead with 9.4 seconds left.

Manek added 14 points and six rebounds for Oklahoma (2-0), and De’Vion Harmon scored 13. Williams had six points, five rebounds and four assists. The Sooners opened their season just three days ago with a 39-point win over UTSA.

Reaves had 12 points in the first half and Harmon nine, but Oklahoma trailed 42-39. Manek's block led to his 3-pointer in transition to tie it at 42.

It was part of the league’s scheduling initiative to have each team play two conference games in December. The Sooners are scheduled to play No. 17 Texas Tech later this month and TCU will play at Oklahoma State.