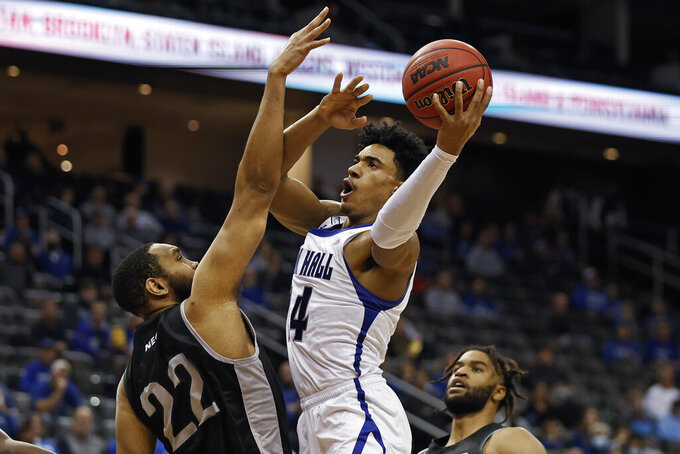 “This is our second game in a row that we played pretty poorly in the first half. So we had a good conversation in the locker room about how important it is to perform two halves," Rhodes said. "So I think everyone came out with a little chip on their shoulder, a little bit more edgy, and I think we picked up the intensity.

“These types of games, if they slip out your hands, your seasons are not over, but it’s detrimental to it.”

“This is the game I’ve been waiting for Kadary to have because he’s probably the best passer I’ve ever seen,” Rhoden said. “His potential is amazing.”

Wagner tied the score at 35-all on a basket by Raekwon Rogers before Richmond dropped in a layup on the ensuing possession that put the Pirates ahead for good.

Wagner took its first loss of the season after postponing three games since Nov. 17 due to a COVID-19 pause.

“Give credit to Wagner because they had a rough past two week being out with COVID, missing probably their best two players,” Rhoden said. “I give those credit to those dudes because they played hard and they came out and they punched us. ”

Wagner: After a 2-0 start, the Seahawks are coming off a COVID-19 pause due to an outbreak in the program that postponed three games. They were without their top two scorers, Will Martinez and Alex Morales, as well as DeLonnie Hunt. Bobby Jordan filled in as interim head coach for Bashir Mason.

Seton Hall: The Pirates are in the midst of the five-game homestand after spending their first two weeks on the road. It concludes with a visit from No. 8 Texas and a rivalry game against Rutgers. The Pirates will cap non-conference play when they face Iona in the Gotham Classic at Madison Square Garden.

In the midst of the easiest part of their schedule, the Pirates should stay right where they are in the top 25, as long as they take care of business when they host D-II Nyack at their on-campus arena, Walsh Gymnasium, on Saturday.

Wagner: At Stony Brook on Saturday.