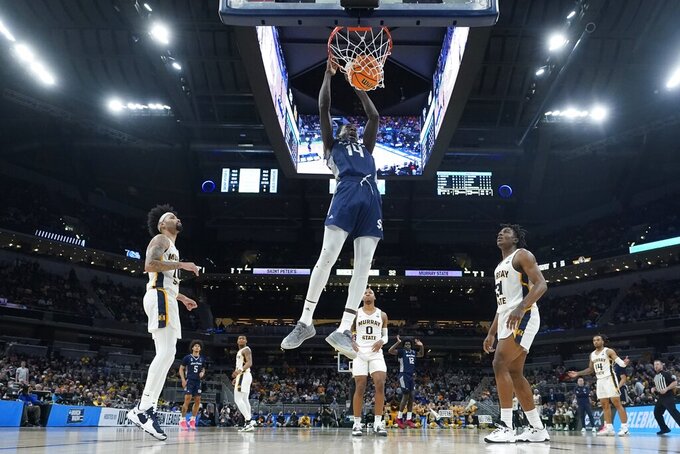 Saint Peter's Hassan Drame (14) dunks during the second half of a college basketball game against Murray State in the second round of the NCAA tournament, Saturday, March 19, 2022, in Indianapolis. (AP Photo/Darron Cummings)

INDIANAPOLIS (AP) — Undersized in every way, Saint Peter's became the latest NCAA Tournament darling that only the most ardent hoops fans had heard of before it stepped onto a court with a March Madness logo.

These proud Peacocks from Jersey City, New Jersey, became the third No. 15 seed to advance to the Sweet 16, first tossing eight-time national champion Kentucky out of the bracket and then taking care of Murray State in a workmanlike 70-60 win on Saturday night.

Even mid-major Murray State was taller and beefier than the Peacocks, but that didn't bother coach Shaheen Holloway or his 6-foot-7, 195-pound power forward, KC Ndefo, who had 17 points and 10 rebounds and played bruising defense at the rim.

“I'm going to say this. It's going to come off a little crazy. I got guys from New Jersey and New York City,” Holloway said. "You think we're scared of anything? You think we’re worried about guys trying to muscle us and tough us out?”

Yep, the Jesuit school with an enrollment of 3,000 has a big Jersey attitude.

“We have played bigger teams the whole time. So them being a little bigger and stronger, it doesn’t faze us. When you got tough, hard-nosed kids, they’re ready to play,” Holloway said.

They were ready enough to break the hearts of Kentuckians two times in three days and join Florida Gulf Coast (2013) and Oral Roberts (last year) as 15 seeds to reach a regional semifinal.

The memories will be lifelong for the Peacocks and Holloway, a North Jersey hoops lifer who played at Seton Hall and apprenticed there as an assistant. On Friday, Pirates coach Kevin Willard endorsed Holloway as his replacement if he departs in the offseason.

The last team from New Jersey to reach the Sweet 16? That would be Seton Hall in 2000, with Holloway at point guard.

“I was a decent player. I’m small. People counted me out. So I had something to prove every time. So I coached that way,” he said.

His next opportunity comes Friday in Philadelphia against either Texas or Purdue.

Doug Edert came off the bench to score 13 points for the Peacocks, including some big baskets late. Saint Peter’s built a 13-point lead early in the second half and never trailed, but Murray State still made it tense. Justice Hill hit a 3-pointer to get the Racers within 59-57 with 4:07 left. Edert followed with a 3 and a layup, and the Peacocks closed it out at the free-throw line.

“I always do my best to get as many shots as I can,” Edert said. “I don’t think about anything when I’m in the game. I just let it happen.”

Hill made five 3s for 19 points and Tevin Brown scored 14 for Murray State. First-half foul trouble hurt the Racers, who had to figure out how to keep DJ Burns and Nicholas McMullen in the game with three fouls each.

Shooting was a problem, too: The Racers shot 35%, including 9 of 28 in the first half. Saint Peter’s finished at 42% and closed the game with a 6-0 run for its ninth consecutive victory. KJ Williams had 12 points and Trae Hannibal scored 10 before leaving the game late with an ankle injury. Murray State was also without starting guard Carter Collins, who turned an ankle against San Francisco in the first round.

“It’s tough because you care. It’s tough because it means something to you,” Racers coach Matt McMahon said. “Because you’re passionate about it. These guys have invested a lot to have this historic season. You certainly don’t want it to end.”

Saint Peter's outrebounded Murray State 38-31 and controlled the boards 32-20. The teams combined for 46 fouls. The Peacocks converted 23 of 31 from the line while the Racers made 16 of 25.

Saint Peter’s didn’t buckle in its overtime win over No. 2 seed Kentucky and showed no fear this time, either. The campus was buzzing after that victory and Holloway said he received more than 800 text messages. The Peacocks are likely to receive a hero’s welcome back in Jersey City.

Murray State eventually regrouped after its early foul problems, but for the first time since late December, the Racers failed to close out a game.

“It's a letdown,” Brown said. “We haven't had the feeling of losing a game in a long time.”

Saint Peter's gets to watch its next opponent on TV when No. 6 seed Texas meets No. 3 seed Purdue in Milwaukee on Sunday.