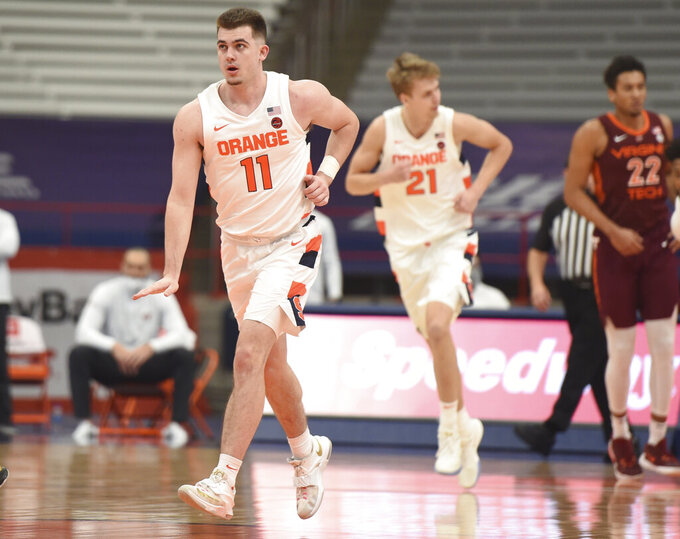 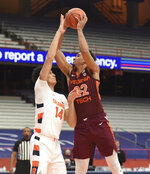 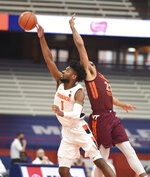 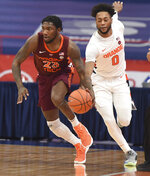 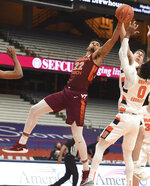 SYRACUSE, N .Y. (AP) — Normally a team that lives and dies beyond the arc, Syracuse showed it can play an inside game, too.

The Orange, in need of a quality win, beat a ranked team for the first time in a year, dominating No. 16 Virginia Tech 78-60 on Saturday.

Quincy Guerrier had 20 points, Marek Dolezaj added 18 and Alan Griffin had 15 points, 10 rebounds and a career-high seven blocks for his fourth double-double of the season to lead Syracuse (9-4, 3-3 Atlantic Coast Conference).

The win snapped a three-game winning streak for the Hokies (11-3, 5-2), who entered the game winners of seven of their last eight. Nahiem Alleyne led Virginia Tech with a season-tying-high 20 points. Tyrece Radford had 10. The Hokies leading scorer, Keve Aluma, had just two.

Sixty-four of Syracuse's points came in the lane or at the free throw line. The Orange took a season-low 13 3-point shots, making only four, but outscored the Hokies 46-24 inside the paint and hit 18 of 22 foul shots.

“We wanted to drive in on their center and make him play defense on Marek,” Syracuse coach Jim Boeheim said. “When we got a mismatch, we got Quincy down in low. That’s what we wanted to do there.”

The strategy worked to perfection, as did Syracuse's execution on defense. The Orange held the Hokies to 20-of-61 shooting for the game and just 8 of 29 from 3, including 2 of 12 from beyond the arc in the second half.

“The defense was the difference,” said Boeheim, whose team gave up 64 second-half points in an ugly loss at Pitt a week ago but has rallied with excellent defensive performances in its last two games. He singled out Griffin for his “phenomenal play” on the defensive end.

Syracuse has a daunting task, hitting the road for a Monday night contest at No. 13 Virginia, but the significance of a resume-building win wasn't lost on the Orange, who lost at Rutgers in early December when the Scarlet Knights were ranked No. 21.

“This was huge for us,” Dolezaj said. “We needed to beat somebody good.”

“Their zone was good today,” said Virginia Tech coach Mike Young. “It bothered us, (but) we got the ball where we wanted. You've got to put the thing in the basket, there's no great secrets I don't care what kind of defense you're playing against, and we didn't do enough of that today.”

“To be honest, I felt like we had great looks,” Alleyne said. “We just weren't making shots today. That happens.”

MAKING THE MOST OF HIS MINUTES

Syracuse freshman Kadary Richmond played just 15 minutes but chipped in with 13 points on 5-of-6 shooting.

Keve Aluma leads the Hokies in scoring at 14.8 points per game but had just two points. He was 1-for-10 from the field after going 1 for 6 and scoring just five points in a four-point win at Wake Forest the previous game last Sunday.

Nahiem Alleyne had 17 points, including five 3-pointers, at the break, but had just three points in the second half.

“I really couldn’t get a rhythm,” Alleyne said. “It was a tough one.”

Virginia Tech: The Hokies were as cold as the Syracuse weather, but the game is probably just a bump in the road considering the way the team has been playing.

“It’s always a concern winning away from home," Young said. "It’s something you’ve got to do if you expect to compete and be at the top of your league, any league. Time will tell. I think we’re OK there.”

Syracuse: The Orange really needed this game and seem to be gaining momentum after two solid wins. If Guerrier, Doezaj and Griffin maintain their consistency, Syracuse has a chance to close strong.

Virginia Tech: Plays three of the next four games on the road, heads to South Bend on Wednesday for a matchup against Notre Dame.

Syracuse: Travels to No. 13 Virginia on Monday for the Orange’s second straight contest against a ranked opponent.