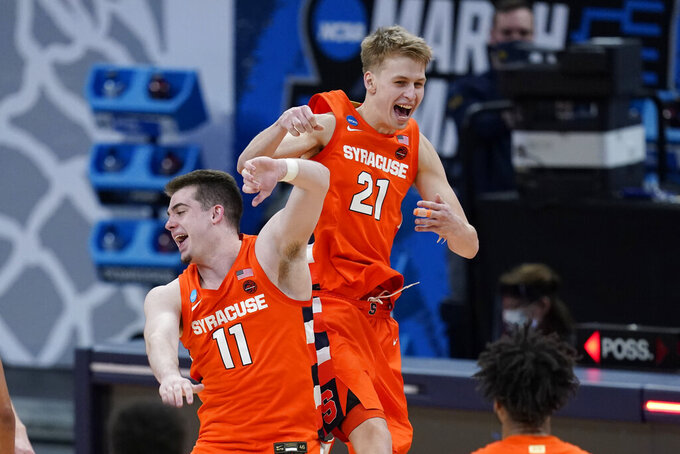 Syracuse coach Jim Boeheim has seen a thing or two in his 45 seasons at his alma mater, and he's normally somewhat reserved in heaping excessive praise on his players. He's made an exception for senior Marek Dolezaj.

“He’s by far the most valuable player on our team. It’s not even close. He’s just a tremendous player,” Boeheim said. “It’s hard to even — you can’t even look at the stat sheet because his importance is so much more. I mean, he has a good stat sheet, but his importance to our team is so much.”

Dolezaj's role this season was altered in the blink of an eye just four minutes into the opener against Bryant in late November. Starting center Bourama Sidibe suffered a knee injury that effectively ended his season (he hass only played 11 minutes since) and the rail-thin, 6-foot-10 forward from Slovakia replaced him in Boeheim's signature zone defense.

To say that Dolezaj responded well to a role he's played before would be an understatement. The latest exhibit came in last Sunday's 75-72 second-round victory over West Virginia, the third seed in the Midwest Region. Dolezaj was on the bench with four fouls nearing the midpoint of the second half as the Mountaineers mounted a rally.

The Orange had built an 11-point lead early in the period thanks to slick passes from Dolezaj that set up junior guard Buddy Boeheim for a pair of 3s. After Dolezaj went to the bench, backup center Jesse Edwards quickly picked up his fourth foul, so back in went Dolezaj and out went the Mountaineers from the NCAA Tournament as the 11th-seeded Orange (18-9) earned a berth in the round of 16 on Saturday night against third-seeded Houston (26-3).

Over the final nine minutes, Dolezaj had four points, three rebounds and two assists as the Orange rallied from one point behind. First-team, All-Big 12 center Derek Culver of the Mountaineers finished 2 of 9 from the floor, one of his worst showings of the season.

“I think the key really was Marek, you know, make the decision — the game is going to get away ... if he doesn’t play," Jim Boeheim said. "He has to be in the game. We run our offense through him. He’s so key for us.”

In two tournament games Dolezaj has scored 23 points on 7-of-10 shooting, snared 10 rebounds, had five assists in each game, hasn’t missed a free throw in nine attempts, and also has three blocks and two steals. On the season, he’s averaging 10 points while eschewing the long ball — he's 0 of 2 from the arc — and is shooting 55.8%, tops on the team. He also averages 5.3 rebounds, has converted a team-best 87 free throws (in 102 attempts), ranks second with 89 assists to go with 47 turnovers, and his 946 minutes lead the team, which means his listed 200-pound frame has taken an awful lot of pounding from the big men in the Atlantic Coast Conference.

“I’ve been here four years and I think this is the hardest year for me,” said Dolezaj, who has added about 20 pounds since he arrived at Syracuse, his love of pizza part of the weight gain.

What makes him special is his versatility, and his basketball IQ is through the roof. Sort of a Wayne Gretzky on hardwood, a deft passer who's happy to create for his teammates.

“He just sees things better than anybody else,” Jim Boeheim said. “He knows when somebody is going to go back door. He’s just a great, great team player. He makes winning plays that are not noticed sometimes, but they’re there. He’s one of the most underrated players in the country.”

Dolezaj with the ball at the top of the key creates a threat for defenses because of his quickness, and that’s allowed shooters like the head coach's youngest son to more easily work their magic.

“He’s a five man that can bring the ball up, make plays, go coast-to-coast, can shut down any big there is no matter what size, just an all-around great player, one of the smartest players you can have,” said Buddy Boeheim, who has hit 13 of 23 shots from the arc in the tournament. “Any five man that can make plays is just a dream for a shooter. It helps me a lot. I get clean looks because of him.”

Not to be lost is the fact that Dolezaj is one tough character, the seemingly perpetual smile notwithstanding. Late in a five-point home win over Georgetown in early January, a stray elbow sent blood streaming down Dolezaj’s chin and part of a tooth bouncing onto Jim Boeheim Court. He finished the game at his coach’s urging.

Just over two years ago, the popular Dolezaj cemented his Orange legacy by simply executing one of his specialties — taking a charge. Not just any charge. A charge from former Duke star Zion Williamson at Cameron Indoor Stadium. The 6-foot-7, 285-pounder was sailing into the lane for one of his trademark slam dunks and Dolezaj, more than 100 pounds lighter at the time, bravely stood in his way, more than willing to suffer the impact for the good of the team. He said in the locker room afterward that he really didn’t know what he was thinking.