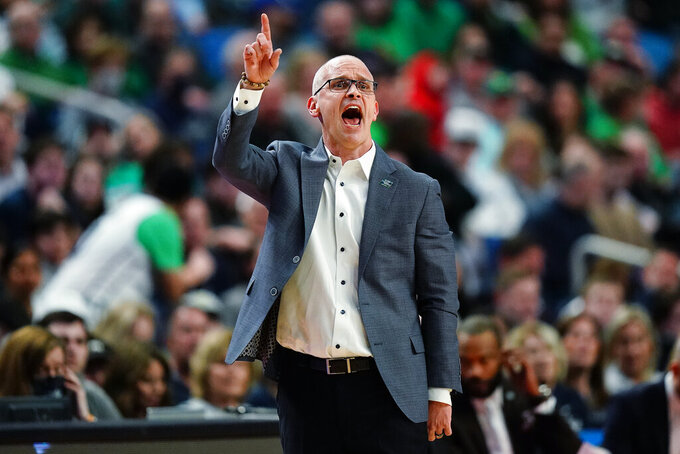 Connecticut coach Dan Hurley motions to players during the first half of the team's college basketball game against New Mexico State in the first round of the NCAA men's tournament, Thursday, March 17, 2022, in Buffalo, N.Y. (AP Photo/Frank Franklin II)

The 6-foot-5 rising senior averaged 17.7 points, five assists, and 4.8 rebounds for the Pirates last season. He will have two remaining years of eligibility thanks to the extra year granted to those affected by the COVID-19 pandemic.

His arrival comes the same week guard Corey Floyd Jr., who sat out last season as a redshirt freshman after arriving early to UConn, announced he would be entering the transfer portal.

Guards R.J. Cole and Tyrese Martin, who could have returned for another season under the COVID-19 rules, decided to pursue professional careers. Their departures were expected.

“It's almost like a different type of sport in terms of your program and how you've got to adapt and be agile,” Hurley said. “It's something, obviously, that we've got to adjust to.”

Hurley said he's happy with the core he brings back from a team that went 23-10, losing in the first round of the NCAA Tournament to New Mexico State.

That will include junior center Adama Sanogo, sophomore guard Jordan Hawkins and junior guard Andre Jackson as well as Newton.

Jackson said he's not angry about the departure of his former teammates because they did what they thought was best for their futures. But he said the idea of leaving a program because you face some adversity is not how he is built.

“For me, I would have stayed in the fight and tried to take my minutes," he said. “It definitely hurts seeing some guys go, but I know that at the end of the day we're going to bring in some really good guys.”