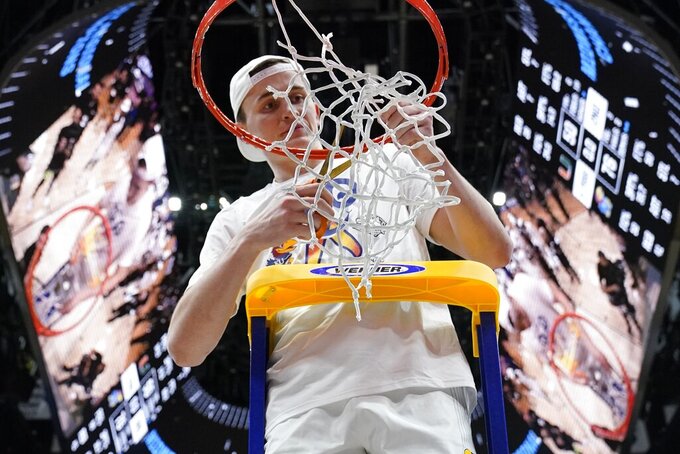 Kansas' Mitch Lightfoot cuts down the net after a college basketball game in the Elite 8 round of the NCAA tournament Sunday, March 27, 2022, in Chicago. Kansas won 76-50 to advance to the Final Four. (AP Photo/Nam Y. Huh) 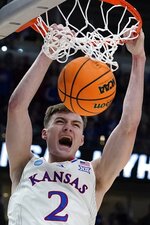 Kansas has only trailed for about 24 minutes through its first four games in the NCAA Tournament, and in both its opener against Texas Southern and its regional final against Miami, the margin of victory was more than 25 points.

Yet somehow, the Jayhawks are flying down to the Final Four under the proverbial radar.

Most of the attention heading into the national semifinals Saturday night will no doubt center on Duke and North Carolina, the two storied programs that have met hundreds of times but never in the NCAA Tournament. And not only will that first matchup come in the Final Four, it will come in the final trip for retiring Blue Devils coach Mike Krzyzewski.

Even in the Jayhawks' own semifinal, more attention is sure to be heaped on Villanova, whose quest for coach Jay Wright's third national championship was dealt a blow by a devastating injury to star guard Justin Moore.

You'd never guess the Jayhawks were the only 1-seed left in the tournament, and even the oddsmakers at Fanduel have made the Blue Devils the favorite to win the national championship.

“I don't know,” Self continued after a pause. “I think these guys have stayed focus They've eliminated distractions for the most part all year long. And they do play for each other. And so when we play the way that I think that we're capable of playing, I have total faith that we can play very well.”

The Jayhawks have sure played well so far in March.

They took a couple of lumps late in the season, but they caught fire in the Big 12 Tournament. They blew out West Virginia by 24, easily beat TCU, then had their way with Texas Tech — which gave Duke all it could handle last weekend — in winning the conference title game.

Kansas has kept the momentum going in the NCAA Tournament: There was a 27-point blowout of Texas Southern in the opening round, when the Jayhawks led 47-19 by the half; there was a gritty 79-72 win over Creighton when they led almost the entire second half; and there was the 66-61 win over Providence in their stiffest test of the postseason.

In the regional final, the Jayhawks stumbled through the first half and trailed Miami by six at the break, only to blitz the overmatched Hurricanes the rest of the way. Kansas outscored them 47-15 in the second half for a 76-50 win that pushed its average margin of victory to more than 16 points through four games of the NCAA Tournament.

Only their upcoming opponent, Villanova, has a bigger margin by a fraction of a point.

Meanwhile, everyone else in the Final Four has had some pressure-packed moments.

The Blue Devils trailed Michigan State with 2 1/2 minutes left in an 85-76 victory, led just 8 1/2 minutes in a slugfest over Texas Tech and had another tough game with Arkansas. North Carolina blew a 25-point second-half lead and needed to hold off No. 1 seed Baylor in overtime. Villanova led Ohio State by six with less than a minute left in a 71-61 victory, then held a four-point lead on Houston with 1:25 left before surviving in its regional final.

Then there's Kansas, which has cruised through the bracket.

“They are really, really good,” Miami coach Jim Larrañaga marveled, “and especially in running the floor. They’ve got so many terrific athletes who all can handle the ball. And then they’ve got David McCormack on the inside.”

Indeed, they might just be the most complete team left.

Ochai Agabji and fellow wings Christian Braun and Jalen Wilson have the unique combination of athleticism, versatility and range, while Remy Martin — the Midwest Region's most valuable player — has given the Jayhawks another dimension at point guard with his breakout performance this tournament. McCormack and fellow post Mitch Lightfoot give the Jayhawks options in the paint, while a deep bench is ready.

No wonder Kansas has trailed just 24 minutes, 11 seconds in the entire tournament.

“On the (Big 12 tourney) podium in Kansas City, like, we were saying we weren’t done yet,” said Agbaji, a first-team All-American and the Big 12 player of the year. “Obviously we had more to accomplish with six more. But on this podium, here (in Chicago), it was like we’ve gotten to this point and now it’s just roll the ball out there and go play in the Final Four.”