Underdog 'Cats? Pick against Villanova at your own peril 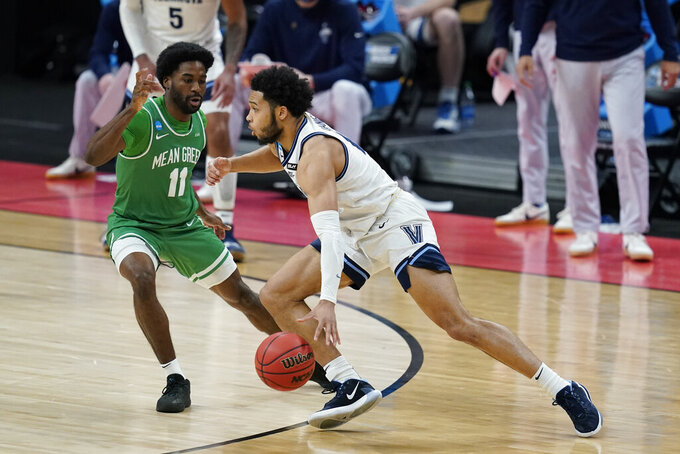 Villanova's Caleb Daniels (14) is defended by North Texas' JJ Murray (11) during the second half of a second-round game in the NCAA men's college basketball tournament at Bankers Life Fieldhouse, Sunday, March 21, 2021, in Indianapolis. (AP Photo/Darron Cummings) 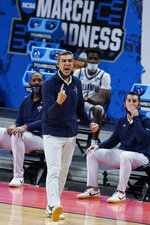 PHILADELPHIA (AP) — The odds are against Villanova making a run to the Elite Eight.

Well, at least among the bettors: Las Vegas has No. 1 seed Baylor a healthy 6 1/2-point favorite to beat the Wildcats on Saturday in a regional semifinal game.

Inside Villanova’s locker room — or even outside, where the fifth-seeded Wildcats passed the time in their Indianapolis bubble playing football and pickleball — the probability of advancing in the NCAA Tournament remained in play.

“I don’t think the players think of themselves as underdogs, which is a good thing,” coach Jay Wright said. “Sometimes, that’s something you have to battle when they’re not underdogs.”

The Wildcats as underdogs?

Certainly, no expert — or even a Temple fan — would consider the Wildcats a plucky Sweet 16 longshot like Oral Roberts as they try and knock off Baylor (24-2). Wright has turned Villanova into the envy of most programs in the sport: a 21st-century dynamo with two national titles (2016, 2018) that stuck the Wildcats with Duke and Kentucky and Kansas and North Carolina in the rarified air of the nation’s elite.

Consider, a third national title would give the 59-year-old Wright as many as Bob Knight, Jim Calhoun and Roy Williams.

Jared Butler and Baylor stand in the way.

If the Wildcats don’t feel like underdogs in the bracket, there’s good reason. The Wildcats were 2-point ’dogs to Kansas in the 2016 Elite Eight game and again in the title game vs. North Carolina.

Bet against them at your peril.

Plus, crushed by a knee injury to Big East co-player of the year Collin Gillespie, a loss in the finale at Providence, and a first-round loss to Georgetown in the conference tournament, the Wildcats were a trendy 12-5 upset pick to Winthrop in remote office pools everywhere.

In fairness, even Wright wondered what to expect out of the Wildcats, saying before the Big East Tournament, “I’ve never felt like we’ve been able to get this team playing like a Villanova basketball team.”

Yes, Gillespie’s torn MCL hurt Villanova's title prospects but the disjointed season — which still resulted in a Big East title — can be pinned in large part on three coronavirus-related pauses totaling 34 days. Wright even had COVID-19 around Christmas.

Villanova opened the season No. 3 in the AP poll. Led by Jeremiah Robinson-Earl, Jermaine Samuels and Justin Moore, the Wildcats might be ready to meet those lofty exceptions.

The Wildcats turned a one-point halftime lead against Winthrop into a 10-point win on the strength of holding the Eagles to 28% shooting from the floor in the second half. Villanova then knocked down 15 3-pointers in an 84-61 victory over North Texas to reach the Sweet 16.

“I do feel better about that, that we’re starting to play Villanova basketball better,” Wright said.

Chris Arcidiacono has started for Gillespie in the tournament and held his own in March following in the footsteps of big brother, and 2018 champ, Ryan. But in a life-moves-pretty-fast moment, Gillespie was the only active player who played in the 2018 championship win over Michigan.

“There’s probably never been a guy since we’ve been here, once guy, that’s had such an impact on a team,” Wright said. “Collin is our leader on the court, off the court.”

Gillespie had that big-game comfort level and served as Wright’s player liaison on every topic from the travel schedule to days off. Gillespie gave Wright a scouting report on Baylor and hoped to join the team as its biggest cheerleader in time for Saturday’s game.

The Wildcats can only hope Gillespie knows how to draw up a winning game plan against Baylor.

“They’re a tough, dynamic, physical team that really gets after it,” Robinson-Earl said.

The Bears, who took a three-week COVID-19 pause in February, are led by Butler, Big 12 Defensive Player of the Year Davion Mitchell and are the top 3-point shooting team in the nation.

“We’ve got some young guys going up against some veteran studs,” Wright said. “It’s not just their talent, but their basketball IQ is outstanding. That’s what happens when guys stay in college a few years. They really learn the game.”

The game is set for Hinkle Fieldhouse, where Villanova has lost four of five times against Big East rival Butler. Villanova and Baylor have played just once and the Bears won in November 2019 at the Myrtle Beach Invitational.

That history means little to anyone in a Wildcats uniform.

“The good thing about coaching young people age 18 to 22, I don’t really think they think that they’re underdogs that often,” Wright said. “As coaches, you definitely know you are.”