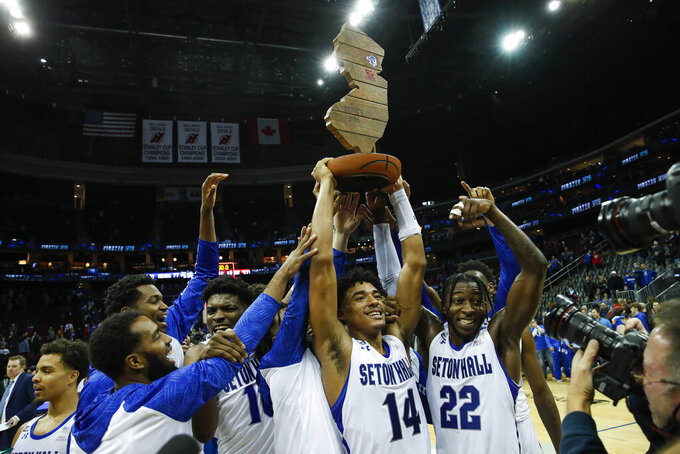 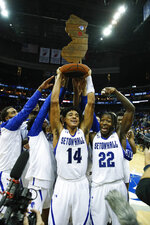 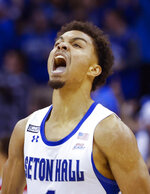 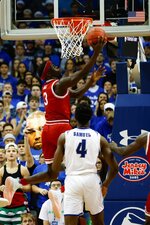 NEWARK, N.J. (AP) — Jared Rhoden raised eyebrows at Big East media day when he said he felt Seton Hall was one of the best teams in the country.

The unranked Pirates were picked to finish fifth in the conference by the league's coaches, but it turns out Rhoden might be right.

Bryce Aiken scored 22 points and Rhoden had 16 points and nine rebounds to lead No. 23 Seton Hall past Rutgers 77-63 on Sunday night in the Garden State Hardwood Classic.

Kadary Richmond added 12 points for the Pirates (9-1), who have two wins over top-10 teams and now a convincing victory against an opponent that had just defeated the No. 1 team in the nation.

“We have a lot of players on this team. It’s no surprise. Everyone knows that,” Aiken said. “So whoever’s going, whoever’s hot, we just play around that person.”

“He gives us the ability to spread the floor at times,” Pirates coach Kevin Willard said. “This is what we see in practice. He’s going to take a 38-footer on the break and he’s got that ability. He has that confidence and I’ve come to realize you just have to let Bryce be Bryce.”

Caleb McConnell had 13 points and 12 rebounds for the Scarlet Knights (5-5), who were coming off a thrilling win Thursday night at home over top-ranked Purdue on a 3-pointer at the buzzer by Ron Harper Jr. from just inside half court.

With a back-and-forth start to the first half, the game was knotted at 23 with 4:18 until the break after McConnell’s jumper. Seton Hall then went on a 14-0 run before taking a 37-27 lead into halftime.

The Scarlet Knights cut it to six on several occasions. The last time was 62-56 at the 6:24 mark before the Pirates pulled away for good.

“Just never seemed to get that stop. There was that long possession where the ball got tipped out of bounds, but we just didn’t play well,” Rutgers coach Steve Pikiell said. “And you've got to play well when you’re on the road against a good basketball team.”

BAKER BACK, OBIAGU OUT

Rutgers senior captain Geo Baker returned to the lineup after missing five games with a hamstring injury followed by the flu.

“Geo hadn’t practiced in 20 days, so for him to come back, he’s obviously a piece of this thing that’s an important piece,” Pikiell said. “To have him back today was good and bodes well for us going down the road.”

Seton Hall big man Ike Obiagu sat out after spraining his ankle in the previous game, a victory over No. 7 Texas.

Willard passed P.J. Carlesimo for second place in program history with 213 wins. Honey Russell is first with 295 from 1937-60.

Rutgers: After making the NCAA Tournament for the first time in 30 years last season, it has been a rough start to the 2021-22 campaign, with losses at UMass and Big East bottom-feeder DePaul, as well as at home to Lafayette. After upsetting Purdue, a win against a ranked opponent in a rivalry game would’ve gone a long way in what’s otherwise a soft out-of-conference schedule.

Seton Hall: The Pirates’ only loss was to No. 21 Ohio State on a late 3-pointer, and they have wins over No. 4 Michigan and No. 7 Texas. After coming into the season unranked, Seton Hall looks like a team that can compete for the Big East title when conference play begins next week.