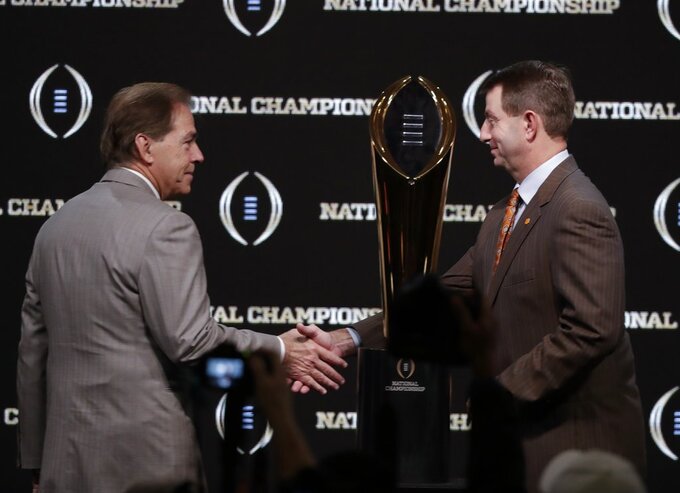 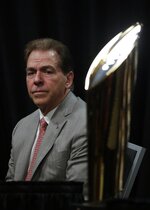 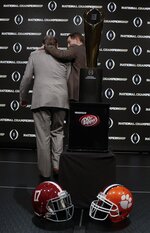 Joint news conference, during which Swinney does most of the talking. Saban compliments Swinney's Tigers. Swinney compliments Saban's unprecedented run with the Crimson Tide. Handshake. Pose for a picture with a trophy. They have done this drill four straight seasons in the College Football Playoff.

Alabama-Clemson IV, the third meeting with the national championship on the line, will be played Monday night at Levi's Stadium in Santa Clara, California. Tide vs. Tigers might be getting old for some fans, but the latest chapter is a feature not a bug in the five-year-old playoff to Swinney.

"I think the objective is to get the two best teams," Swinney said. "If that's not best for college football, then why did we even do it?"

For the first time the College Football Playoff championship game features two unbeaten teams. The top-ranked Tide (14-0) or No. 2 Tigers (14-0) will become the first 15-0 FBS champion in college football's poll era, dating back to the first AP rankings in 1936.

Saban and Alabama are already in the midst of the most impressive run in the college football history, with five national championships since 2009. If not for a last-second loss to Clemson in the 2016 championship game, the Tide would be shooting for four straight playoff titles. Alabama won a thriller against Clemson for the 2015 title.

Saban has six national championships total, including a BCS crown with LSU in 2003. One more breaks a tie with Alabama great Bear Bryant for the most by any coach.

"I don't ever even think about that at all," said Saban, who is in his 12th season at Alabama and 23rd overall as a college head coach. "I do think a lot about trying to make and help this team to be the best possible — and to put them in the best possible position to have a chance to be successful."

A case can be made that Saban has already surpassed Bryant, who was at Alabama for 25 years. The current Alabama dynasty is stacking up championships despite the constraints of scholarship limits and against competition bolstered by a deeper talent pool and more national exposure.

"You're talking about a program that I have a deep love and respect for, always have, always will, and a coach that's — I mean, he's won six national championships and the level of consistency is a model and an aspiration for every program," said Swinney, who was a walk-on receiver for Alabama's 1992 national title team coached by Gene Stallings.

Swinney and Clemson have come closest to reaching the Alabama standard. A second national championship in three seasons would give Clemson three overall (1981, 2016) and put Swinney in prestigious company. Among the Hall of Fame coaches with two national championships are Bobby Bowden of Florida State and Joe Paterno of Penn State.

Alabama's dominance has been defined by almost monotonous excellence. None of Saban's teams stand out. They are similarly stellar, machine-like in their efficiency. This team has a chance to separate from the rest. Alabama can become just the third wire-to-wire No. 1 in the AP poll, joining 1999 Florida State and 2004 Southern California.

The biggest difference in this Tide team is Tua Tagovailoa, who came off the bench as a freshman to beat Georgia in last season's championship game. For the first time, Saban has a star quarterback. Alabama has rolled through its opponents by an average of 31 points.

"His accuracy, his athletic ability, his ability to improvise," Clemson defensive coordinator Brent Venables said of Tagovailoa. "He's got the best players on the planet around him at every position, and they're two and three deep."

Clemson has been almost as impressive, winning by an average of 29, led by a defensive line that features All-Americans Clelin Ferrell and Christian Wilkins.

"They have so many disruptive plays," Alabama running back Damien Harris said. "They cause so much havoc for the offense that they're playing."

Plenty of attention has been focused on Tagovailoa's sprained left ankle, but Alabama linebacker Christian Miller (hamstring) is questionable. Miller has 8 ½ sacks this season.

On the Clemson side, defensive tackle Dexter Lawrence will sit out a second playoff game after being suspended by the NCAA for a failed performance-enhancing drug test. Lawrence is a junior and possible first-round draft pick who has likely played his last game for the Tigers. Senior Albert Huggins will start for the second straight week for Clemson in Lawrence's spot.

Clemson's Trevor Lawrence would be the first starting freshman quarterback since Oklahoma's Jamelle Holieway in 1985 to lead his team to a national championship. Lawrence took over as the starter four games into the season and has thrown for 2,933 yards, 27 touchdowns and four interceptions.

"If anybody ever watched him, they wouldn't think he was a freshman," Saban said.