Auburn exceeds expectations as one of last unbeaten teams 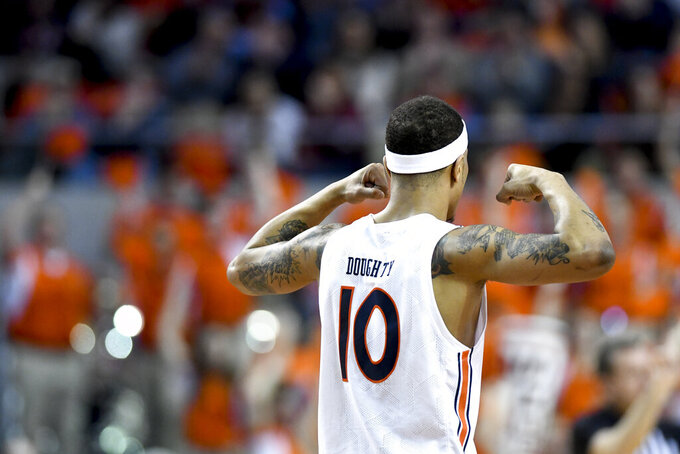 Auburn guard Samir Doughty celebrates a foul call against Vanderbilt during the first half of an NCAA college basketball game Wednesday, Jan. 8, 2020, in Auburn, Ala. (AP Photo/Julie Bennett)

AUBURN, Ala. (AP) — The Auburn Tigers haven't missed a step — or lost a game — after losing their three best players from last season's Final Four team.

The fourth-ranked Tigers have ascended 20 spots in the AP Top 25 since the season began, won their first 15 games and sailed through the opening games of Southeastern Conference play.

Even with a relatively friendly early schedule, it’s an impressive start for a team that had to reload following the program’s first Final Four appearance.

Led by guard Samir Doughty, center Austin Wiley and freshman Isaac Okoro, the Tigers (15-0, 3-0 SEC) are one of two unbeaten teams in Division I, along with No. 7 San Diego State. Auburn visits rival Alabama (8-7, 1-2) on Wednesday night.

“Auburn is a tremendous team, one of the best in our league, probably one of the best in the country," Georgia coach Tom Crean said after the Bulldogs' 82-60 defeat last weekend. “Any conversation that comes up in the next few months about who could win it all should have Auburn in it.”

It was far from a foregone conclusion that the Tigers, who have often struggled to sustain success from season to season, would still be generating that much buzz in mid-January. They were picked 24th in the preseason rankings.

The Tigers have undergone quite a makeover after the loss of 3-point marksman Bryce Brown, point guard Jared Harper and versatile Chuma Okeke, the program’s first NBA draft pick in 18 years. The current group has eight newcomers paired with five seniors.

“The biggest thing — they're really skilled, but they play hard all the time," first-year Alabama coach Nate Oats said. “There's no dips in their effort, in my opinion. I think it's an every game, every play deal that they're bringing an intensity that we're starting to figure out. But they've been doing it here for a couple of years, and that's why they played in the Final Four."

Okoro has emerged as one of the SEC's top freshmen and a potential first-round NBA draft pick, living up to coach Bruce Pearl's prediction that he would contend for the league's freshman of the year honor. Doughty has picked up some of Brown's scoring and shooting load and Harper's backup J'Von McCormick has ably replaced him.

“Nobody in our program could replace those three guys offensively," Pearl said Tuesday. “And it's harder to replace Chuma defensively because he was so good. But J'Von can defend like Jared.

“Samir is a better overall defender (than Brown). And then you add Isaac Okoro, who can be one of the better defensive guards in the country."

This Auburn team is making fewer 3-pointers and grabbing more rebounds, thanks partly to a healthy Wiley. The team is giving up 66.3 points per game and outscoring opponents by an average of 15-plus points (seventh-best nationally).

“I feel like we’re probably the best defensive team in the country," Okoro said. “We just work on it day in and day out in practice. Bruce instills that in us, so I feel like we’re one of the best teams at it."

The Tigers have won 27 of their last 28 games dating to last season's run to the SEC Tournament title and the Final Four.

They have benefited from a schedule that so far hasn’t been too demanding. Auburn has only played one team in the top 50 of the NCAA’s power rankings — No. 48 Saint Louis.

One thing Pearl doesn't know is how his team will handle its first loss.

“We'll see how we respond to losing," he said. “We're going to lose. And I always say adversity reveals character. And so our character will get more and more revealed once we lose."