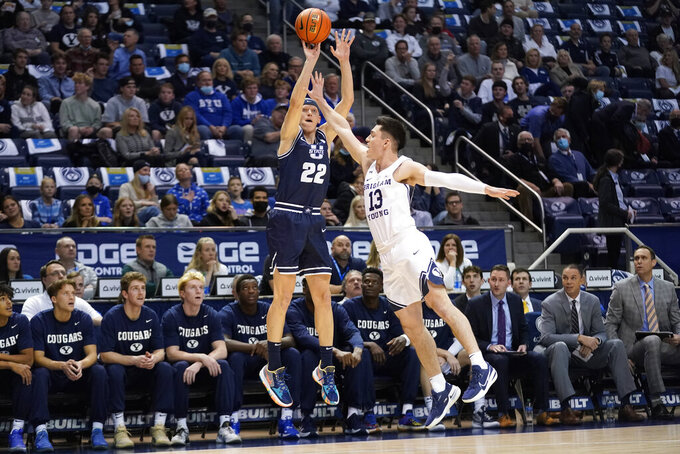 Fousseyni Traore chipped in 14 points and Trevin Knell added a season-high 13. The Cougars (8-1) shot 50% from the field as they won their second straight game and remained unbeaten at home.

BYU shot 50% or better for the third time this season.

“We’re 8-1 and we haven’t shot the ball that well,” Barcello said. “I know the ball is going to fall for us. We’re going to keep shooting with confidence and, hopefully, that will take us to another level.”

BYU has won 10 straight against Utah State dating to 2011.

The Cougars won in part by pushing the pace. They only had five offensive rebounds after averaging 13 per game coming in, but they also created more open looks at the basket.

“I love teams that can win more than one way and this team has proven they can,” BYU coach Mark Pope said.

The Cougars broke a 17-17 tie in the first half with a 12-0 run highlighted by a steal and layup from Lucas. BYU held Utah State scoreless over a five-minute stretch.

“Their offense challenged us, and we were on our heels from the very beginning,” Aggies coach Ryan Odom said.

BYU took a 66-46 lead in the second half after Spencer Johnson bookended a 12-2 run with a pair of 3-pointers.

The Aggies strung together a big run to get back into the game. Horvath drained back-to-back 3-pointers and made a putback layup to cap a 16-3 run and cut BYU’s lead to 69-62. Utah State had multiple chances to draw closer but Bean, Horvath, and Bairstow each missed free throws down the stretch.

“We missed some free throws that could have flipped the game,” Bairstow said. “Still proud of how we played and how we fought.”

Utah State: Turnovers contributed to multiple scoring droughts for the Aggies and made it difficult to rally once they fell behind. Utah State totaled 17 turnovers and trailed by double digits for much of the second half.

BYU: Excellent ball movement led to high-percentage shots for the Cougars before halftime. BYU had 12 assists on 16 baskets in the first half. For the game, the Cougars had 19 assists on 26 baskets.

Traore went 8 for 8 from the free-throw line. He attempted only 10 free throws in BYU’s previous eight games, making six. Four of his free throws against Utah State came in the final minute to help prevent the Aggies from mounting a comeback.

BYU outrebounded Utah State 31-26. The Aggies lost the rebounding battle for the second straight game after out-rebounding opponents 47 straight times before that.

BYU needs to beat Creighton on Saturday to stay in the AP Top 25 next week.