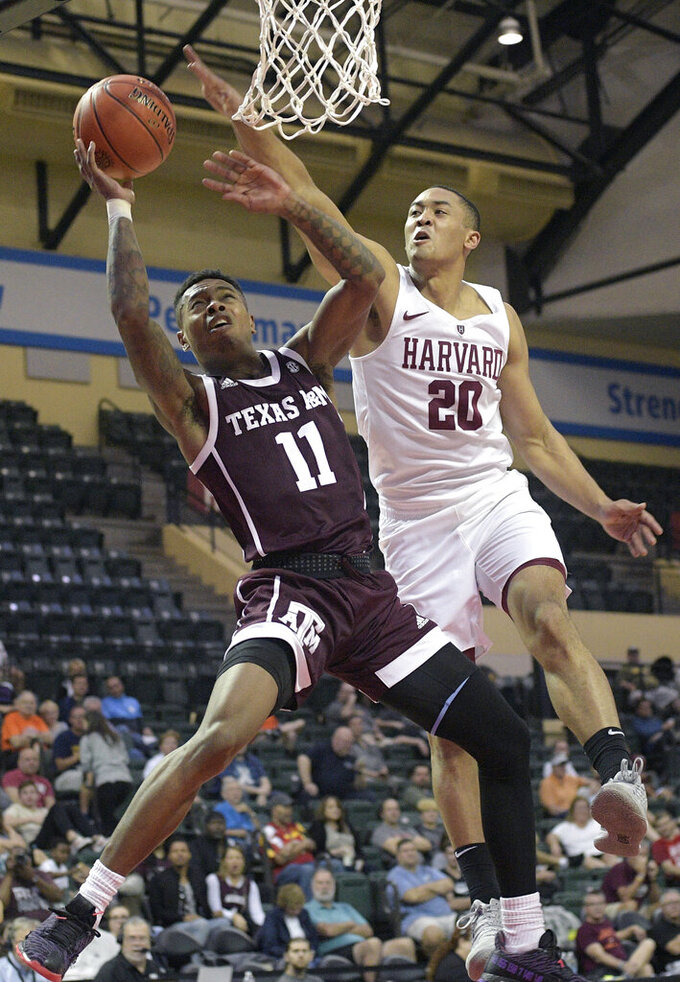 Texas A&M guard Wendell Mitchell (11) is fouled by Harvard guard Justin Bassey (20) while going up for a shot during the second half of an NCAA college basketball tournament game Thursday, Nov. 28, 2019, in Lake Buena Vista, Fla. (AP Photo/Phelan M. Ebenhack)

LAKE BUENA VISTA, Fla. (AP) — Justin Bassey scored 16 points and Harvard made all 22 of its free throws en route to a 62-51 victory over cold-shooting Texas A&M in the first round of the Orlando Invitational on Thursday.

The Crimson (5-2) advanced to the semifinals of the eight-team tournament at Disney World and will face No. 5 Maryland, a 76-69 opening-day winner over Temple.

Bassey paced a balanced scoring attack, making five of seven shots on an afternoon when Harvard was 6 of 29 from behind the 3-point line and shot 32% overall. Bryce Aiken had 15 points and Chris Lewis and Rio Haskett added 10 apiece.

“Neither team played a pretty form of basketball, but it was gritty, and it was tough, and I thought our kids were on the winning side of that,” Harvard coach Tommy Amaker said. “We probably made more of those plays, and we needed to.”

Texas A&M (3-2) missed 15 of its first 16 shots, but only trailed 22-18 at halftime because of Harvard’s own poor marksmanship. The Aggies led briefly before fading down the stretch, with Crimson doing most of its damage from the foul line, where Harvard made eight during a 13-7 surge that put the Crimson up 58-46 with two minutes left.

“I’m encouraged, not by the result, I’m encouraged by the process that led to the result,” Aggies coach Buzz Williams said. “That’s the best we’ve played all year. I feel completely different in regards to how hard they’re trying relative to what we’re asking them to do.”

Harvard: Robert Baker scored just two points on 1-of-6 shooting, however the 6-foot-11 senior forward had 13 rebounds for the Crimson, who forced 16 turnovers while also outrebounding the Aggies 40-30.

Texas A&M: Lost for the second time in five games under Williams, who’s in his first season leading the Aggies program after successful stints at Marquette and Virginia Tech. It was Texas A&M first road game of the year.