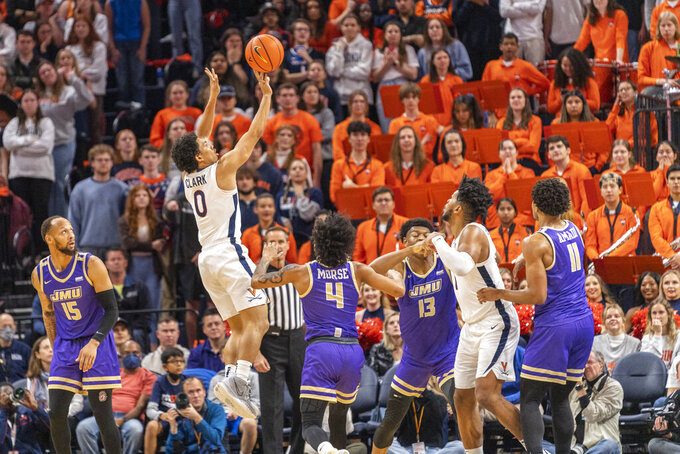 The Cavaliers (8-0), who lost starting guard Reece Beekman to a right leg injury early in the first half, prevented the Dukes (7-3) from winning a second straight December game in Charlottesville. James Madison beat Virginia 52-49 last Dec. 7.

“Kihei gave everything he had and I had to, you know, ride him,” Virginia coach Tony Bennett said. “Sure, he missed some free throws. And I know he made some mistakes, but you could just see him, you know, how tough-minded he was.”

Dukes coach Mark Byington said he told Clark — who's playing his fifth season for Virginia — after last year's game that he loved watching him play.

“He’s seen everything and nothing you’re going to do is going to surprise him,” Byington said. “There's nothing Kihei Clark hasn't seen out there, and he's poised. I mean, you can’t rattle him. ... So I told him this time I was like, ‘Look, I better never see you in college basketball again.’ But he’s one of my favorite players to watch just because he’s tough, talented, and he’s a winner."

Takal Molson scored 18 of his 20 points in the second half for James Madison, including a 3-pointer that tied the game at 42-all with 7:47 to play. Gardner responded for Virginia by scoring five straight points in a 9-1 run.

The Cavaliers kept the Dukes in the game by missing eight of 13 free throws over the last six minutes.

Molson made an acrobatic layup while being fouled with 1:51 left, but he missed the free throw. He scored again with 1:01 left, pulling the Dukes within 52-50, but freshman Ryan Dunn answered with a strong move on the baseline for Virginia with 35 seconds to play.

James Madison threw the ball away on its ensuing possession.

James Madison: The Dukes came into the game leading the nation in scoring (93.3 points per game) and having scored as many as 95 points five times. They were shooting 52.7% for the year, but made just four of their first 19 shots and finished 15 of 55 (26.9%). Vado Morse scored 11 points, the only other JMU player in double figures.

“Yeah, we knew how good they were and they showed it in spots tonight,” Gardner said. “But I think you saw a lot of resiliency tonight on the defensive end getting crucial stops.”

Virginia: The Cavaliers played the final 36 minutes without Beekman and gave extensive minutes to freshman Isaac McKneely. Virginia will hope Beekman, its third-leading scorer and a primary ballhandler and defender, recovers in time for its showdown with No. 1 Houston on Dec. 17.

The Dukes return home to play Gallaudet on Saturday night.

Virginia has a 10-day break before hosting the top-ranked Cougars.