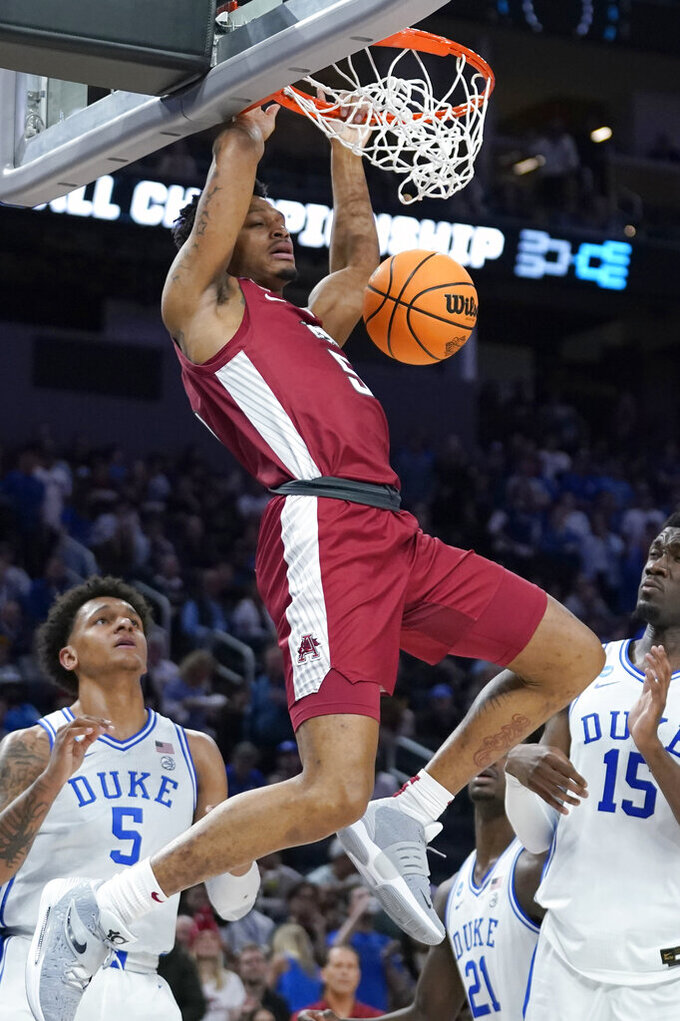 Arkansas guard Au'Diese Toney, top, dunks against Duke during the second half of a college basketball game in the Elite 8 round of the NCAA men's tournament in San Francisco, Saturday, March 26, 2022. (AP Photo/Marcio Jose Sanchez) 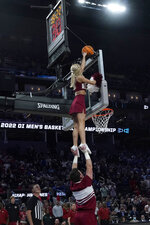 SAN FRANCISCO (AP) — Mike Krzyzewski slowly climbed up the ladder, bowed to the adoring Duke fans and then pointed to his players to give them the credit before cutting the final string of the net.

The Blue Devils delivered their most complete performance of this NCAA Tournament run to extend the career of their Hall of Fame coach for one more weekend after beating Arkansas 78-69 on Saturday night in the West Region final.

A.J. Griffin scored 18 points, West Region MVP Paolo Banchero added 16 and and second-seeded Duke (32-6) frustrated fourth-seeded Arkansas (28-9) on the offensive end to get back to the Final Four for the first time since Krzyzewski won his fifth championship in 2015.

Coach K will try to follow the path of the only coach to win more NCAA men's titles as John Wooden won his 10th championship in his final season at UCLA in 1975. Krzyzewski broke the tie he had with Wooden for most Final Four appearances with the commanding win over the Razorbacks.

“It’s an honor. Coach Wooden, if he kept coaching, would probably have 24,” Krzyzewski said. “But it’s a heck of a thing. We’ve won a lot in the tournament, and we’ve won a lot of games, but Final Fours are big, obviously, then national championships. That’s what you put banners up for.”

Duke's upcoming matchup in New Orleans next Saturday will be historic either way — either its first NCAA Tournament meeting with archrival North Carolina or an unfathomable tangle in the national semifinals with 15th-seeded Saint Peter's.

The Blue Devils were in control for most of the second half, using an 10-0 run after Arkansas had cut the deficit to five points early in the half to open up a big cushion. The spurt came following a timeout when Krzyzewski once again switched his team to an uncharacteristic zone after having success doing that in the Sweet 16 against Texas Tech.

“I think going zone helped,” said defensive anchor Mark Williams, who had 12 points, 12 rebounds and three blocks. “I think it gave them a different look, slowed them up a little bit.”

Jaylin Williams ended that run with an emphatic dunk over Banchero for a three-point play but it wasn't nearly enough for the Razorbacks, who didn't cut the deficit into single digits until the final minute of the game.

Williams led Arkansas with 19 points and 10 rebounds and JD Notae had 14 points before fouling out. The Razorbacks shot 41.9% for the game but felt proud after turning their season around following an 0-3 start in the Southeastern Conference.

“We all wanted to get further in this, but the fight this team has showed all year has been incredible,” Williams said. “For the way that we started off conference, nobody would have expected us to get this far. So I just think that this team just kept fighting the whole year, the whole year, but, of course, we didn’t get where we wanted."

Duke closed the first half on an 8-0 run to take a 45-33 lead at the break with Banchero hitting a 3-pointer to start the spurt. Trevor Keels hit another 3 from long range just before the buzzer.

Arkansas: For the second straight season, coach Eric Musselman's Razorbacks fell short against a more talented team in the Elite Eight. They lost to eventual champion Baylor last year. Arkansas is still seeking its first Final Four appearance since losing the title game in 1995 to UCLA. The Razorbacks won their only national championship the previous season against Duke.

Duke: After losing the regular-season finale to North Carolina in Coach K’s final game at Cameron Indoor Stadium and in the Atlantic Coast Conference tournament final to Virginia Tech the following week, the Blue Devils used late rallies to beat Michigan State and Texas Tech the previous two rounds but played a much more complete game against Arkansas. That bodes well for their chances in New Orleans.

“We never doubted as a team, a young team too,” Griffin said. “We knew what we were capable of, and we just wanted to show the world.”

A cheerleading team was once again called upon to recover a ball that lodged at the top of the basket following a missed shot by the Razorbacks early in the second half. The Arkansas cheer team leaped into action with Kaiden Thraikill boosting Bella Shelley up to knock the ball loose, generating a big roar from the crowd.

No. 8 seed North Carolina faces tournament darling Saint Peter's on Sunday, with the winner booking a dance in New Orleans with the Blue Devils.