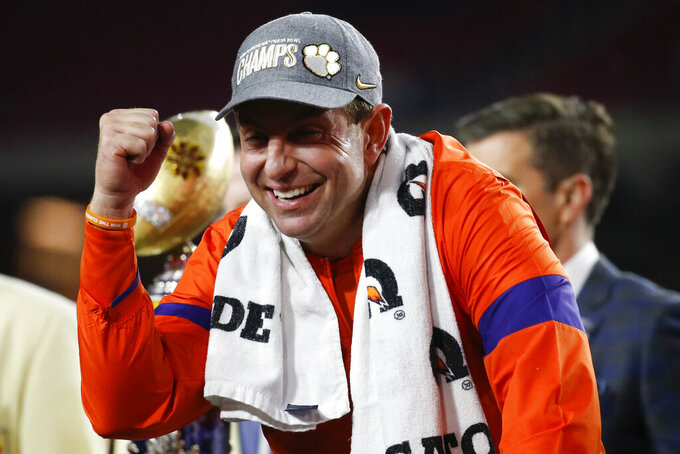 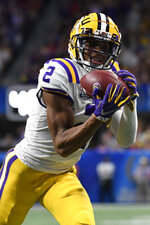 NEW ORLEANS (AP) — Gloomy clouds were lingering over the Big Easy as the contestants were scheduled to arrived for the so-called national championship game.

The weather conditions Friday were an appropriate mood-setter.

The tedious, 16-day-long break since the semifinals has largely stifled the momentum of the college football season, turning the biggest game of all into a bit of an afterthought.

More troubling, to call this a “national” championship would be a misnomer.

Clemson and the Southeastern Conference have put a stranglehold on the title game, providing casual fans beyond this corner of the country with little reason to tune in.

Since the College Football Playoff was launched in 2014 — and Ohio State defeated Oregon in an inaugural championship game that turned out to be a total outlier — the Deep South has monopolized the four-team format.

Atlantic Coast Conference powerhouse Clemson has made five playoff appearances, won two national titles and will be going for another when it faces top-ranked LSU on Monday night at the Superdome.

Alabama, long-time kingpin of the SEC, made five straight playoff appearances and won two national titles before finally missing out this season. Their place was effectively taken by conference rival LSU, which knocked off the Crimson Tide in Tuscaloosa during the regular season.

Therefore, every championship game except the first has featured some combination of Clemson and/or the SEC.

No surprise, said Chris Fowler, who will be calling the title game for ESPN.

“Population base for the talent. Pretty simple,” he said this week. “It's simply the concentration of youth football, high school football is so important, the pool of players is so large, and the commitment of resources to programs down there, other than a few exceptions outside of the South ... by and large more resources, more players down there, and I don't think it's going to change anytime soon.”

Compare the relatively closed club that is the college football postseason with the free-for-all produced by its hoops counterparts.

Over the last six years, 19 schools from nine conferences — and every corner of the country — have reached the men's basketball Final Four.

Five teams have been fortunate enough to make two appearances. No one else has gotten there more than once.

While the powerhouse Atlantic Coast Conference has snagged three national titles during the six-year span, they've done it with different teams (Duke, North Carolina and Virginia). Villanova from the Big East claimed the title in 2016 and 2018 , while UConn from the neophyte American Athletic Conference got the cycle started as the 2014 champion.

The SEC, Big Ten, Big 12 and West Coast conferences have all been represented in the title game, as well.

In other words, a truly national sport.

Not so on the gridiron, at least at the highest level.

“You can structure the playoff any way want to, but if it's the same couple of teams in the mix all the time, you have to ask the question: Is there truly national competitiveness?" said Big 12 Commissioner Bob Bowlsby in a blunt self-assessment.

Bowlsby's conference has been a playoff regular thanks to Oklahoma, which has made the field four out of six years. But the Sooners have barely bucked the dominance enjoyed by Clemson and the SEC, losing in the semifinals all four times.

This year, the gap never looked greater as LSU embarrassed Oklahoma 63-28 in the Peach Bowl.

“Would it be better if over a six-year period there had been 24 different schools involved in it and had a different champion every year?" Bowlsby asked, not even waiting for an answer. “Yeah, probably, for the excitement of the event.”

The last thing we needed was yet another Clemson-Alabama sequel.

Heck, they even had the good sense to halt "The Godfather” after Part III.

The playoff powers-that-be also need to figure out a way to avoid a repeat of this year's disjointed schedule. which had the semifinal games on Dec. 28 (instead of New Year's Day, for no apparent reason) and the latest championship game in college football history.

The 16-day gap has given both finalists a chance to heal up, which might produce a better game, but the long layoff has undoubtedly led many sports fans to turn their attention elsewhere.

Most notably, the NFL will have played two whole rounds of playoff games by the time the college game finally settles its champion.

“Ideally, for momentum and fan interest, you wouldn't want it to be 16 days," Fowler conceded.

In fairness, this delay is essentially a fluke of the calendar. Next year, the Rose and Sugar Bowl semifinal games will be held on Jan. 1, followed 10 days later by the championship game at Miami. Looking ahead to 2023-24, there will be only a one-week gap between the semifinals and title game.

A bigger issue is how to address the regional imbalance.

Many have called for an eight-team playoff format that would ensure berths for each of the Power Five champions, along with a spot for the top team from the Group of Five conferences.

While that model would undoubtedly provide for a more diverse field in the quarterfinal round, there is little reason to believe it would carry over to the semifinals, much less the championship game.

“Are you going to bring fresh blood to the podium to accept the trophy? I don't think so,” Fowler said. “I don't think an expansion of eight is going to produce a much different bracket of four. You might have an upset. There's a possibility of that. That's exciting in sports. But less likely to happen in football than basketball. So I think you're going to have the same teams.”

So much for a national championship.

This is really just a Southern affair.