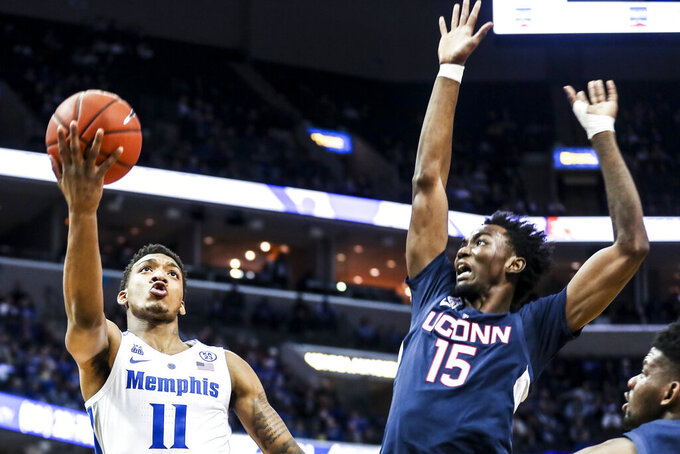 MEMPHIS, Tenn. (AP) — Memphis coach Penny Hardaway has wanted to spread the offensive load around to other players in recent games. Kyvon Davenport took the challenge, having his best game in weeks.

Davenport had not topped 20 points in the last nine games and Hardaway had said other players needed to help out Martin, a senior, with the scoring load.

"Everything is set up for him to go out and do that. He just has to produce," Hardaway said when asked how to keep the 6-foot-8 Davenport engaged. The Memphis coach added that the Tigers offense is set up to get Davenport the ball in areas where he is comfortable.

"The rest is up to him. Today, he decided to come and be more aggressive to the basket and he did that."

For UConn, it was a day that started slowly and, despite several rallies to pull close to the Tigers, the Huskies never could overtake Memphis, which took the lead to 14 in the first half and 16 in the second.

"We're a young team. They're a veteran team," Huskies coach Dan Hurley said, later adding: "(Memphis) emotionally was probably a little bit more ready to play. And I think it also took us a little bit of time to gauge their athleticism. Their athleticism took a little bit for us to get adjusted to."

The Huskies were playing their first game since leading-scorer Jalen Adams (17 points per game) suffered a left knee injury that will keep him out of action for 4-6 weeks. That meant adjustments for UConn offensively.

Tyler Polley led the Huskies (13-11, 4-7) with 20 points, while Sidney Wilson finished with 16. Christian Vital and Tarin Smith added 13 apiece for UConn, which lost its second straight and third in the last four.

Despite Memphis building double-digit leads in both halves, and still holding a 10-point advantage with three minutes to go, UConn had a final push. A couple of dunks and a 3-pointer from Smith had the Huskies within 72-68, but UConn never got closer as Memphis converted all four of its free throws in the closing 30 seconds.

"There's never a good loss or anything you feel good about when you walk out," Hurley said. "It stings. It hurts. It's not something we're used to at the University of Connecticut."

He later added: "This is year one of establishing a championship organization. So, before you're whole, before you have everything you need to climb ladders and cut down nets, you have to learn how to compete and fight."

UConn: Playing without Adams, the Huskies got a career-high performance from Polley, a sophomore, who was 7 of 12 from the field with four 3-pointers. Only seven Huskies played and 40 percent shooting, along with 18 turnovers, were not enough to overcome the big leads Memphis built.

Memphis: Davenport's 26 points came on 9-of-13 shooting, but Memphis couldn't keep UConn off the boards. The Huskies outrebounded the Tigers 37-27, including 16 offensive rebounds.

Both Memphis and UConn are rebuilding programs that have had success in the past. Hardaway has brought excitement back to the Memphis program and Hurley is striving to rebuild the Huskies to the days of championship seasons. And Hurley sees the teams eventually having a nice rivalry. "I said to Penny in the handshake that I expect with what we've got coming in and what we're going to build, with what he's going to build. I don't expect to come into these matchups with a 13-10 record very often in the future."

UConn: Entertain No. 25 Houston on Thursday.

Memphis: Travels to East Carolina to face on Wednesday.