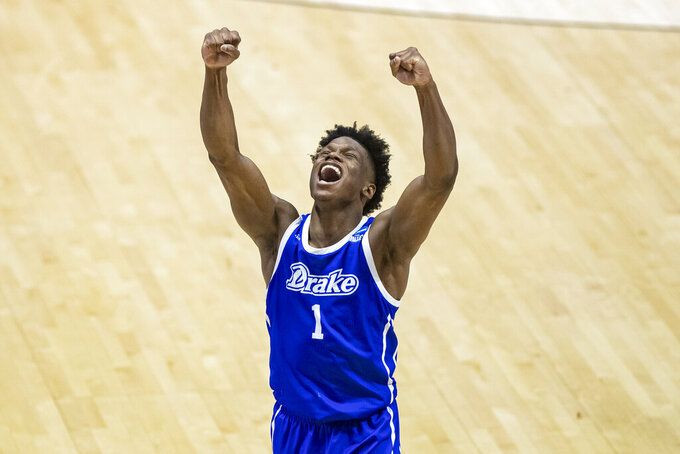 The several hundred blue-clad supporters who got to see the Bulldogs in person on Thursday night ended up witnessing the team's first NCAA Tournament win in a half-century.

“To get a win for our program that hasn't happened in 50 years — it's really exciting,” Bulldogs coach Darian DeVries said. “These guys have fought through so much, and for them to be the ones to get us one, I think is really deserving.”

Attendance was limited because of the coronavirus pandemic, leaving most of the seats at Mackey Arena empty, and the Drake crowd finally made some noise at the end of a game that deserved a much bigger audience.

Wichita State’s Dexter Dennis made a 3-pointer with 8 seconds remaining to trim Drake’s lead to a point. The Bulldogs got the ball in to Yesufu, who was fouled. He missed the front end of a 1-and-1 to give the Shockers a chance, but Wichita State’s Alterique Gilbert settled for a long 3-pointer that hit the front rim as time expired.

“Perseverance,” Yesufu said. “We’ve been doing that all year.”

The Bulldogs were hardly overmatched in this year's tournament field — they came in with 25 wins, second most of the 68 teams behind top overall seed Gonzaga. The win was extra validation for DeVries, who was rewarded this week with a contract extension through 2028-29.

Tremell Murphy added 11 points for 11th-seeded Drake (26-4), which advanced to play sixth-seeded Southern California in the West Region on Saturday.

It was the 152nd meeting between the former MVC rivals. Wichita State left for the American Athletic Conference in 2017. Both mid-major powers were given at-large bids into the NCAA field, and their matchup was dominated by defense — Drake shot 38% while Wichita State shot 34%.

The Shockers reached the NCAA Tournament after an offseason of turmoil. Seven players left the program, and longtime coach Gregg Marshall resigned before the season amid allegations of verbal and physical abuse. Isaac Brown was promoted to interim coach. Wichita State removed Brown's interim tag last month as the Shockers won eight straight late in the season before closing with a one-point loss to Cincinnati in the AAC Tournament.

“I went to the locker room and I didn’t even talk about the game,” Brown said. “I said, ‘Man, I’m so proud of you guys. You guys were picked seventh. You won the AAC.’ ... Great effort. We just didn’t get it done tonight.”

The Bulldogs rallied. Yesufu threw down a nasty one-handed dunk over Clarence Jackson on a fast break and then hit a 3-pointer with 7 seconds left in the first half to trim the Shockers' lead to 21-20. Wichita State was scoreless for the last five minutes of the half.

Drake tied the game in the opening minute of the second half on a 3-point play by Darnell Brodie. Wichita State responded with a 9-0 run that included five points from Udeze.

“We kept letting them hang around,” Brown said.

Tyson Etienne, Wichita State’s leading scorer at 17 points per game, was held to one point on 0-for-6 shooting. He was in foul trouble much of the night and played 27 minutes.

ShanQuan Hemphill, Drake’s leading scorer, came in off the bench after having missed more than a month with a broken left foot. The senior forward from Michigan City, Indiana, finished with three points and four rebounds in 10 minutes.