Florida St focused on this year, not what might have been 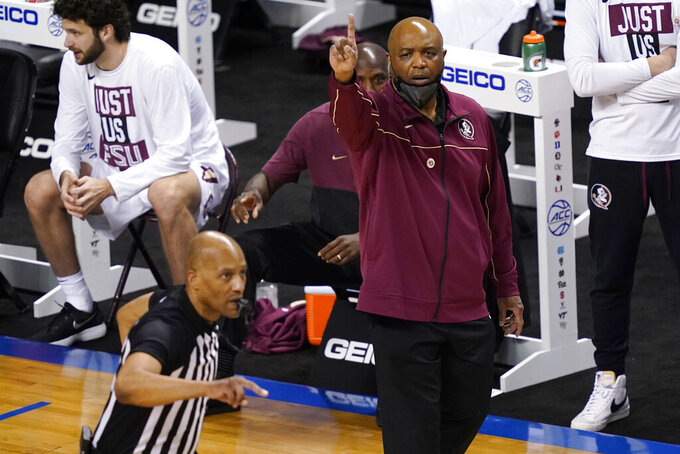 Florida State head coach Leonard Hamilton directs his team during the first half of an NCAA college basketball game against North Carolina in the semifinal round of the Atlantic Coast Conference tournament in Greensboro, N.C., Friday, March 12, 2021. (AP Photo/Gerry Broome)

Leonard Hamilton isn't one to dwell on what might have been.

That's why he's telling his Florida State team to concentrate on the present when it comes to preparing for the NCAA Tournament.

The Seminoles were in line for a No. 1 seed last year after winning their first Atlantic Coast Conference regular-season title before the coronavirus pandemic canceled March Madness. Florida State didn't let that disappointment derail this season. It is still formidable as the East Region's fourth seed going into Saturday's first-round game against UNC-Greensboro.

“We haven’t talked one second about us not playing in the tournament last year. I told our players today, you can’t look in the past,” Hamilton said. “What we got to do is take advantage of what we can control and that’s preparation and practice.”

Florida State finished a program-record fourth in last year's final Associated Press Top 25 poll. While Kansas and Gonzaga, which were ranked 1-2, also appear to be formidable, two of last year's top 10 didn't have the same success this season. Third-ranked Dayton is in the NIT and No. 8 Kentucky turned in its worst record by winning percentage since 1927.

The three teams seeded higher than the Seminoles in the East weren't ranked in last year's season-ending poll. Top seed Michigan got the fourth-most votes among teams while Alabama and Texas didn't even receive a vote.

“To be back in this position, I feel like it’s been so long, but it’s a blessing to be here,” senior guard M.J. Walker said. “You can feel the excitement, walking past teams in the hotel and seeing the March Madness courts that we're practicing on.”

Florida State is looking to get to the Sweet 16 for the third straight tournament behind two familiar Hamilton trademarks — depth and an up-tempo offense. The Seminoles led the ACC in scoring offense, averaging 78.9 points per game and have nine players averaging at least 14 minutes per game. A surprise is that they are making 38% of their 3-pointers, which is a program record.

Walker, a 6-foot-5 senior, is averaging a team-leading 13.1 points per game and has hit 44.1% of his shots from beyond the arc. Junior forward RaiQuan Gray averages 12.4 points and leads the team in rebounds (6.9 per game).

Hamilton also wants his team focused on the present because of their struggles down the stretch. The Seminoles were in position to repeat as ACC regular-season champs but dropped two of their final three games, including an eight-point loss at North Carolina after they led by 12 at halftime.

Florida State advanced to the ACC Tournament title game, but committed 25 turnovers in a 80-75 loss to Georgia Tech.

Despite the runner-up finishes, Hamilton thinks his team has caught its second wind going into the tournament.

“This can’t help but rejuvenate your spirits. You have another chance to go compete for another title. I mean, you have to be excited for that,” he said. “I don’t think there’s any doubt that we’re gonna be focused.”

Three former Hamilton assistants, including two who were with him at Florida State, are also in the field: Kansas' Bill Self (who was with Hamilton at Oklahoma State), Southern California's Andy Enfield and Cleveland State's Dennis Gates.

Gates spent eight years on Hamilton’s staff and remains connected with him.

“Look, there is nothing I don’t do right now without calling Leonard Hamilton or try to find out what he thinks,” said Gates, whose Vikings will play Houston in the first round of the Midwest Regional. "I’ll call him at 3 o’clock in the morning, ‘Coach, what you think?’ I know the answer to it. I just need to hear it. What I miss most is taking my laptop, sitting in his office and just being a fly on the wall. I miss those days, but I can still get them and gain them with a call. Hopefully, I can make him proud because he put his arms around a perfect stranger who on the first day said, ‘Coach I want to be just like you.’ So I hope in a little bit of me he sees himself.”

Sports Writer Tom Withers in Cleveland contributed to this story.