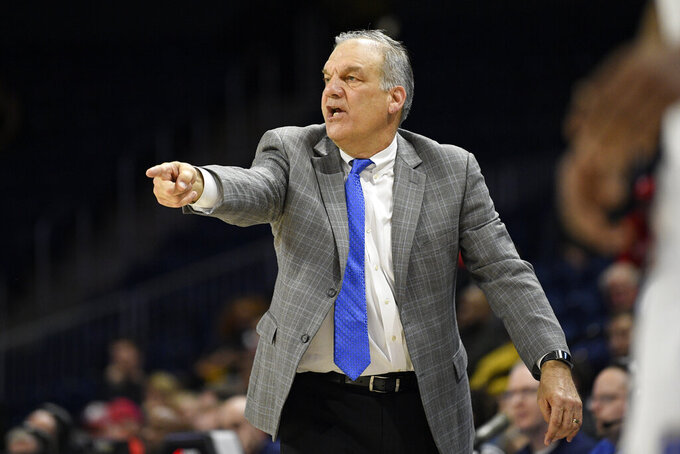 File-This March 10, 2020, file photo shows Hofstra head coach Joe Mihalich reacting during the second half of an NCAA college basketball game in the championship of the Colonial Athletic Association conference tournament against Northeastern in Washington. Mihalich, who missed last season after taking a medical leave, will shift jobs and become a special adviser to the school’s athletic director. The school announced the move Friday, March 19, 2021. In August, Hofstra said the 64-year-old Mihalich would be out but didn’t specify the reason.(AP Photo/Nick Wass, File)

The school announced the move Friday. In August, Hofstra said the 64-year-old Mihalich would be out but didn’t specify the reason.

Mihalich’s final game on the bench was a 70-61 victory over Northeastern for the Colonial Athletic Association Tournament championship last year. That gave the Pride their first NCAA Tournament appearance since 2001 -- but they didn’t get to play when the tournament was called off because of the coronavirus pandemic.

Associate head coach Mike Farrelly became Hofstra’s acting head coach this past season and guided the Pride to a 13-10 record. The school said a national search for the next head coach will begin right away.

After 15 years as head coach at Niagara and 17 as an assistant at La Salle, Mihalich was hired by Hofstra before the 2013-14 season, taking over a team that had just gone 7-25.

In his seven seasons on the bench, Hofstra won at least 20 games four times and went 141-92 overall. Mihalich led the Pride to two appearances in the NIT and what would’ve been their first game in the NCAA Tournament in two decades.

“I always said to my sons and my teams ‘end on a make’ ... and that’s what I did,” Mihalich said in a statement released by the school. “Having that championship moment in 2020 is something I, and the entire Hofstra family, will never forget.”

“I look forward to serving the Hofstra Pride in a new role and seeing our programs continue to flourish,” he said.

Mihalich had a combined record of 406-295 at Hofstra and Niagara.

Athletic director Rick Cole Jr. praised Mihalich as “an incredible leader, educator, and steward of our men’s basketball program over the past eight years.”