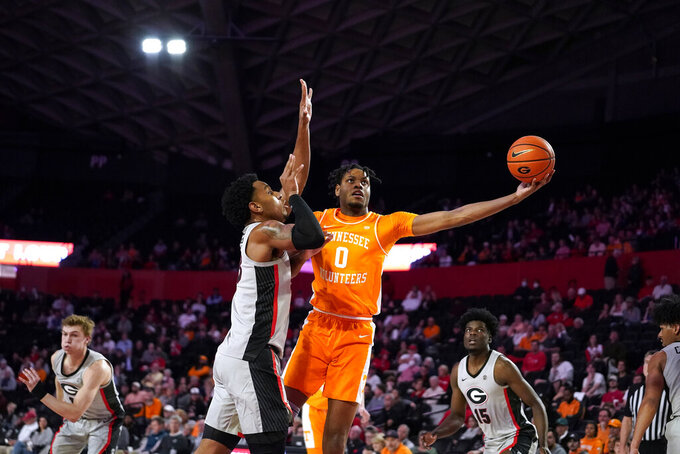 ATHENS, Ga. (AP) — If No. 13 Tennessee is considered a big favorite in an early-round NCAA Tournament game this month, John Fulkerson hopes the Vols remember their shaky first half against lowly Georgia.

Josiah-Jordan James scored a career-high 23 points, including back-to-back 3-pointers that gave Tennessee the lead early in the second half, and the Vols overcame a slow start to beat the struggling Bulldogs 75-68 on Tuesday night.

Georgia led 44-43 early in the second half following a 3-pointer by Kario Oquendo.

“I think the biggest thing is we’ve got to come ready to play every game and we can’t take any team lightly,” said Fulkerson, who scored 12 points. “With it being March 1 now, we have to be locked in every game because at this point of the season every game can be our last game.”

Tennessee (22-7, 13-4 Southeastern Conference) began the day tied with No. 14 Arkansas and No. 7 Kentucky for second place in the league, one game behind No. 5 Auburn.

Kennedy Chandler had 16 points with four steals for the Vols.

After Oquendo gave Georgia the lead early in the second half, James answered with his 3s on consecutive possessions. Another 3 from James capped Tennessee's 11-0 run for a 54-44 lead.

“I felt like we felt as a team we were just settling too much and if we could just get the ball moving we could get the shots we wanted,” James said.

Aaron Cook led Georgia with 17 points and Kario Oquendo had 16.

Tennessee took a 64-49 lead but couldn't put the game away. Georgia closed the deficit to four points but couldn't score on two possessions when it had the opportunity to pull even closer.

“They fought their butts off,” Georgia coach Tom Crean said of his team. “They fought and they believed and they didn’t flinch.”

The Bulldogs enjoyed a rare streak of explosive offense in the first half to cap an 8-0 run.

There were scattered boos for Crean during pregame introductions. Crean fell to 47-73 overall and a dismal 15-56 in SEC games in his fourth season, leading to much speculation about his job status.

The 24 losses this season are the most in Georgia history. The Bulldogs have one more opportunity to avoid finishing the season with one conference win for the first time.

“He said, ‘I’ve got what I have here, coach,’" Barnes said. “He was really concerned about his mother and extended family.”

Zeigler had been third on the team with his average of 10.4 points in SEC games. He scored two points against Georgia.

“It’s been a tough couple days for him,” Barnes said.

Georgia seniors Aaron Cook and Jonathan Ned were honored in a pregame ceremony. Other seniors, including Noah Baumann and Braelen Bridges, chose not to participate, according to Crean, since they could return for their extra year of eligibility granted by the NCAA due to the coronavirus pandemic.

Seniors Jailyn Ingram and P.J. Horne have the option to apply for medical redshirts and return for the 2022-23 season. Horne, who had been the team’s only returning starter, missed the full season and Ingram was lost in December, each with knee injuries.

Tennessee: Led by James' long-distance shooting, the Vols enjoyed a strong recovery from a sluggish first half. The Vols struggled defensively in the first half, allowing the Bulldogs to make 51.7% of their shots from the field and claim a 22-16 advantage in the paint. Georgia shot only 37.9% in the second half and finished with a 38-32 advantage in the paint.

Georgia: The Bulldogs can't be accused of giving up on Crean or the season. Even so, their performance remained too flawed to sustain a strong first half. The Bulldogs' 12 turnovers were a problem, but the more telling was Georgia's deficit on the boards. Tennessee had a 39-28 advantage in rebounds.

Tennessee: Closes its regular season at home on Saturday when it plays No. 14 Arkansas. The Vols lost at Arkansas 58-48 on Feb. 19.

Georgia: At Missouri on Saturday to end its regular season.