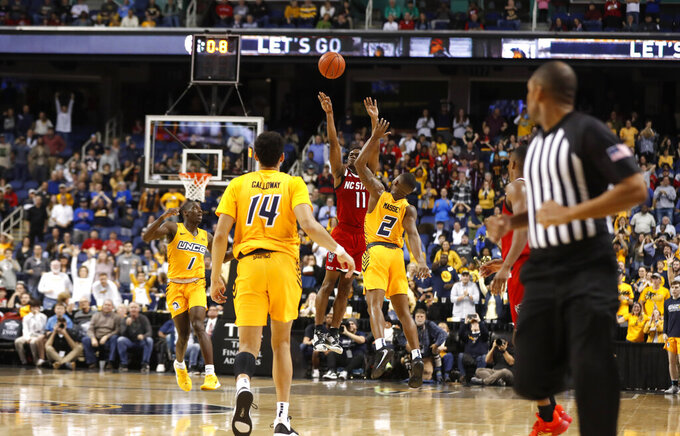 GREENSBORO, N.C. (AP) — Markell Johnson knew there were only a few seconds left in a tie game as the inbound pass came his way with North Carolina State facing overtime.

“Get it up before the time went out,” Johnson said, “that was the only thing that was going through my mind.”

Johnson did just that, launching a running heave from beyond halfcourt that dropped cleanly through the net at the horn to give the Wolfpack an 80-77 win against UNC Greensboro on Sunday.

Johnson was immediately mobbed by teammates and nearly tackled into the scorer's table, though he eventually caught his feet well enough to start waving his left arm toward the crowd in the Greensboro Coliseum.

“It just felt like it was right,” Johnson said of the shot.

It was a remarkable play that came immediately after a tough tying basket from Isaiah Miller over Johnson with 2.1 seconds left in what turned into a wild finish between instate programs.

Johnson finished with 19 points for the Wolfpack, who blew a 13-point second-half lead but hung on thanks to the senior's final heave. It's the second one from near halfcourt that he's hit this year, the first coming just before halftime in a win against Wisconsin in the ACC/Big Ten Challenge.

Miller had banked in a tough shot over Johnson from the paint to tie the game at 77, capping his own at-times dominant second-half performance. Jericole Hellems fired the inbound pass to Johnson, who took one dribble then jumped off his left foot to launch.

“I never think those shots go in,” Wolfpack coach Kevin Keatts said, who added that he started thinking it looked good during its flight.

It was a thought shared farther down the Wolfpack bench, too.

“I think probably two or three of the guys sitting next to me ... at the time it went up, everybody pretty much said, ‘It’s going in,” graduate transfer Pat Andree said.

Miller scored 21 of his 26 points after halftime for the Spartans (8-3), who lost for the second time on a shot from beyond halfcourt at the buzzer.

“We're really invested,” Spartans coach Wes Miller said. “We've got a bunch of guys that really work at it and really care. So emotionally this will be difficult today. But I think it would be a lot more difficult if that was the last game of the year.”

N.C. State: N.C. State had been off since last weekend's win at Wake Forest to even its Atlantic Coast Conference record at 1-1. N.C. State shot 60% for the game and hit 13 of 26 3-pointers, the last standing out as a highlight-reel moment in the building the Wolfpack will visit in March for the ACC Tournament.

UNC Greensboro: The Spartans already had a notable win this year, beating Georgetown on the road on Nov. 30. This time they were trying to win a second straight meeting with the Wolfpack, the last coming two years ago in Raleigh when they rallied from 14 down before halftime. They were also playing without second-leading scorer and rebounder Kaleb Hunter, who is sidelined by an ankle injury.

UNC Greensboro lost 67-66 on a banked-in heave to Montana State at home on Nov. 16, prompting both Isaiah Miller and James Dickey refer to a feeling of deja vu after this one.

“You're kind of just in a little daze until you see that ball bounce off that rim,” Dickey said. “I really wasn’t thinking about anything, I was just kind of just watching like a movie, and it was a scary movie today.”

The 6-foot Miller played with a fiery competitive edge throughout the second half, both on offense and in his role near the top of the Spartans' pressure defense.

He made 8 of 14 shots after halftime to score more than half of the Spartans' points to go with five rebounds.

“I had seen they were switching a lot,” he said. “So I usually was just trying to switch on the (4-man) or the big man, get downhill. If I saw any advantage, I just took it.”

N.C. State: No. 12 Auburn hosts the Wolfpack on Thursday in the second game of a home-and-home series, with N.C. State winning the first last season.