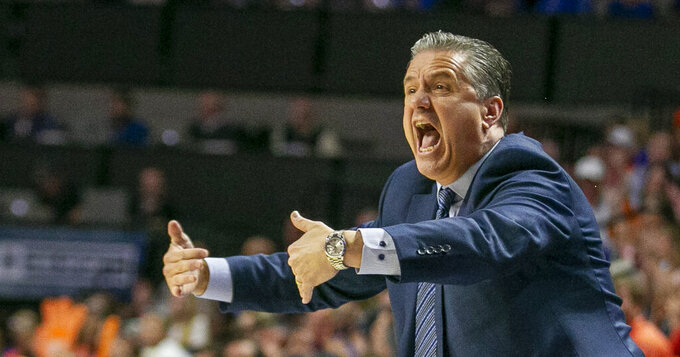 FILE - Kentucky head coach John Calipari screams at players after Florida scored during the first half of an NCAA college basketball game in Gainesville, Fla., in this Saturday, March 7, 2020, file photo. The No. 10 Wildcats lost five starters among nine departures from last season including Southeastern Conference Player of the Year Immanuel Quickley and All-SEC first teamer Nick Richards. Of course, being Kentucky, expectations of another national championship remain high. (AP Photo/Alan Youngblood, File) 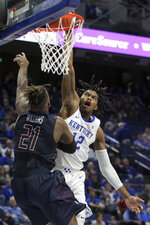 Kentucky has yet another crop of Big Blue-chippers and Tennessee looks poised to prove last season was a blip on an otherwise impressive recent run of success.

When it comes to the rest of the Southeastern Conference it's anybody's guess.

T he 10th-ranked Wildcats will rely heavily on the nation's top recruiting class, led by top 10 prospects Brandon Boston Jr. and Terrence Clarke and point guard Devin Askew. They have no choice since coach John Calipari must replace all five starters and nine players total, including SEC Player of the Year Immanuel Quickley.

“We’re all together trying to figure everybody out,” Calipari said. “But this is every year.”

Rick Barnes and No. 12 Tennessee have replenished their talent with a top 5 signing class after a disappointing follow-up to a Sweet 16 run in 2019. Enter five-star guards Jaden Springer and Keon Johnson to help stage a turnaround.

Kentucky and Tennessee were the only SEC teams to crack the preseason AP Top 25. But others have also fortified their NCAA Tournament hopes with key transfers and highly rated freshmen.

LSU, Florida and Alabama were all among the top vote getters outside the Top 25.

A number of teams will be leaning on transfers, with Kentucky and Tennessee among those getting a boost. The Wildcats added 7-footer Olivier Sarr from Wake Forest. The Vols are hoping for instant and needed rebounding help from Sacred Heart grad transfer E.J. Anosike. Ex-Oregon player Victor Bailey Jr. is also available after sitting out last season.

“We weren’t very good in that area a year ago, and it’s something we’ve really made a conscious effort on to know that we have to be better there,” Barnes said of the rebounding reinforcements. “E.J. will help us and he does a great job in that area. It’s not just going to be him though.”

The SEC had five of the nation's top 12 recruiting classes according to the 247Sports composite rankings, with Kentucky and Tennessee followed by LSU (No. 6), Auburn (9) and Alabama (12.) Boston was rated the fifth-best prospect and Clarke, No. 8.

The pandemic wreaked havoc on the nonconference schedules, but there are some solid games still. That includes Tennessee vs. Kansas, Alabama-Oklahoma, Auburn-Baylor and Arkansas State-Oklahoma State.

The Gators face No. 4 Virginia followed by visits to Oklahoma and 21st-ranked Florida State.

But Kentucky has the most big-name opponents: Notre Dame and Texas at home, along with neutral-site matchups against Georgia Tech, Kansas and UCLA plus a visit to Louisville.

The Tigers have won 81 games over the past three seasons, including SEC regular season and tournament titles. Now, coach Bruce Pearl has his youngest team with five freshmen and five sophomores. No scholarship players are left from the Final Four team two seasons ago and Isaac Okoro departed early for the NBA.