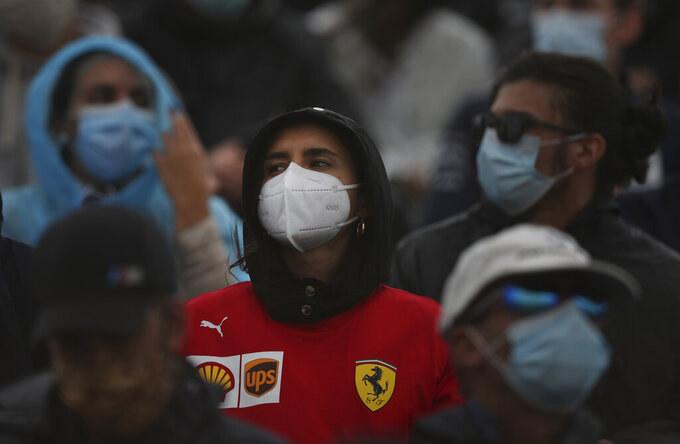 The Detroit Lions have put safety Jalen Elliott on the reserve/COVID-19 list.

The list is for players who either test positive or have been in close contact with an infected person. Detroit also put linebacker Jarrad Davis and quarterback Matthew Stafford on the list earlier in the week.

“Commenting on his availability for the game would fall into the category of commenting on his health status,” Patricia said Thursday. “Trying to respect league rules and also out of respect for the player, I can’t comment on any of those things, other than just, again, what his status is on the roster.”

The service academy game between Air Force and Army scheduled for Saturday at West Point, New York, was postponed Thursday due to an increase in COVID-19 cases at the Air Force Academy and the surrounding community.

The schools are working to reschedule the game.

The Falcons can win the Commander-in-Chief’s Trophy with a win over Army. Air Force began the round-robin competition between the service academies with a 40-7 win over Navy on Oct. 3.

The winning academy goes to the White House to receive the coveted trophy from the President.

UConn has suspended all men's basketball activities after a player tested positive for the coronavirus.

The school made the announcement Thursday, but did not say who had contracted the virus or when.

“Per university protocol, team activities will remain on hold until contact tracing is completed and it is deemed safe by medical professionals to resume,” the school said in a statement.

The school announced earlier this week that due to concerns stemming from the pandemic, public health officials have ruled that attendance for games at Gampel Pavilion will initially be limited to the families of players and and coaches from both teams, with each player or coach receiving a maximum of four tickets.

The Huskies are scheduled to open the season on Dec. 2 in the Legends Classic at the Mohegan Sun arena, which is about 30 miles south of campus in Uncasville. Vanderbilt, USC and Brigham Young are scheduled to be the other participants.

Sporting Kansas City said a “first-team player” has been confirmed positive for COVID-19. The Major League Soccer team said all other players and members of the club returned multiple negative test results and do not have symptoms.

“Upon receiving an initial positive test result early this week, the player self-isolated under a strict and comprehensive protocol,” the team said in a statement. “The player will remain in isolation until medically cleared and will be monitored daily by the club’s medical staff. Sporting Kansas City has also implemented contact tracing ahead of the club’s regular-season finale against Real Salt Lake (on Sunday in Sandy, Utah).”

The MLS testing protocol requires all MLS players to undergo tests every other day, including the day before each match. The confirmation of a positive COVID-19 case occurs when a player receives two consecutive positive test results.

Canada is recalling some members of its national ski teams from Europe because of the deteriorating coronavirus pandemic there.

Alpine Canada did not identify who was returning, nor would it confirm a CTV report that some of the Canadian ski cross team were ill with the virus.

Therese Brisson, the chief executive officer, said the organization would not comment on speculation “regarding personal health matters.”

Alpine Canada said it has changed training plans in anticipation of World Cup races and the world championships, including the relocation of some teams to Canadian venues.

The ski cross team has been training in Saas Fee, Switzerland, a popular preseason site for many countries. Infections are rising in the Valais region where the resort is located, prompting an increase in gathering restrictions and business regulations.

The Kansas City Chiefs closed their facility after practice Thursday when an unidentified staff member tested positive for COVID-19, forcing the team to continue its preparations remotely for Sunday’s game against Carolina.

The Chiefs became the third NFL team this week to close its facility due to positive tests. The Texans announced Wednesday night that a player had tested positive and all operations would be conducted virtually on Thursday, and the Bears cancelled their Thursday workout when another of their players tested positive.

The Chiefs have been remarkably clear of positive COVID-19 tests since early in the season, when a player on their practice squad tested positive before a game against New England. Fullback Anthony Sherman recently came off the COVID-19 list. He was placed on it because he had been in close contact with someone who had tested positive.

Marquette won’t allow fans at any men’s basketball or women’s basketball home games through at least the rest of 2020 due to safety concerns regarding the novel coronavirus pandemic.

Athletic director Bill Scholl said the school would continue to evaluate the situation as the season progresses. If the school decides to admit fans in early 2021, tickets would be sold on a single-game basis.

Missouri’s soccer match at Georgia scheduled to be played Friday has been canceled due to positive COVID-19 tests and subsequent quarantines within the Georgia program.

The regular season ends this weekend, so the match will not be rescheduled.

On Wednesday, Georgia announced coach Billy Lesesne tested positive for COVID-19. Lesesne is in isolation and is expected to return for next week’s Southeastern Conference tournament in Orange Beach, Alabama.

The Chicago Bears canceled practice and closed their facility Thursday after another player tested positive for COVID-19.

The Bears said in a statement they found out in the morning about the positive test. They said the player and all close contacts are self-isolating.

Coach Matt Nagy said in a Zoom call he is not on the list of close contacts, though he would not say which players — or how many — are.

The Bears were cleared Thursday night by the NFL to practice on Friday. They are scheduled to play at Tennessee on Sunday.

The Ohio Valley Conference has expanded its basketball schedule from 18 games to 20 this season.

The OVC expanded the schedule trying to make up for the delayed start to the basketball season because of the novel coronavirus pandemic and it's trying to give programs more games closer to home. Teams will play each other once, with nine playing twice. Teams also will be able to schedule two games with a “travel partner” separate from the rest of the conference schedule with two required to be scheduled before the holiday break and the other at any point.

Commissioner Beth DeBauche says athletic directors explored a number of scheduling options trying to work around the pandemic. She says they decided increasing league competition was the best move knowing they may have to modify schedules once play begins.

Saturday’s football game between Tulsa and host Navy has been postponed following a rash of positive COVID-19 tests at the Naval Academy.

Many Navy athletes are under quarantine, and the Midshipmen have temporarily halted all football activities.

“Protocols and guidelines are very comprehensive both at the Naval Academy and within the American Athletic Conference,” Navy athletic director Chet Gladchuk said. “An administrative decision has been made that clearly reflects the safety and welfare of all involved with both institutions.”

A makeup date has not been announced. Navy and Tulsa do not share a common open date through the rest of the season.

The Indianapolis Colts say one staff member has tested positive for COVID-19 and is under the care of team doctors.

The team still planned to hold practice but anticipated doing team meetings virtually and away from headquarters.

The Colts say they have entered the league’s intensive protocol and are working with NFL officials and medical staff. The team staffer is in quarantine.

The announcement comes one day after Detroit Lions quarterback Matthew Stafford was placed on the reserve/COVID-19 list. Indy (5-2) beat the Lions 41-21 last weekend and hosts Baltimore (5-2) on Sunday.

Eight defensive players missed the Ravens practice Wednesday after Pro Bowl cornerback Marlon Humphrey said Monday he had tested positive. Humphrey is the only one of the eight to test positive.

The Tennessee Vols and Lady Vols will have a maximum capacity of about 4,000 fans --close to 18% of arena seating -- for games this season.

The school announced the decision Thursday in accordance with state and local guidelines during the pandemic. It is following recommendations from the Southeastern Conference for indoor events, which requires at least 6 feet between groups along with a 12-foot buffer zone between fans and personnel and players on the court. That means the first four rows will be empty.

Fans at Thompson-Boling Arena must wear face coverings except when eating or drinking. Sections will be designated for students.

Athletic director Phillip Fulmer says, as is the case with football, Tennessee won’t be able to accommodate all season-ticket holders. Fulmer says the school has tried to be as thoughtful and deliberate as possible.

The Houston Texans have closed their facility and will conduct all operations virtually after learning a player tested positive for COVID-19 on Wednesday night.

The team says the unidentified player is self-isolating and the team has started contract tracing.

Houston plays at Jacksonville on Sunday.

The team also had to shut its facility during its bye last week after another player tested positive. Interim coach Romeo Crennel said the building underwent a deep cleaning after that test and normal operations resumed Monday.

An outbreak of COVID-19 cases has forced the postponement of soccer’s Levain Cup final on Saturday in Japan.

The J-League says 10 new coronavirus cases were reported among players and staff on the Kashiwa Reysol club. The club says two were players and eight were staff members.

Three other people related to the club had already tested positive during the week.

Kashiwa and FC Tokyo were to have played Saturday. An alternate date has not been set.

Japan has largely controlled the coronavirus and has reported about 1,800 deaths from COVID-19 in a country of 126 million.