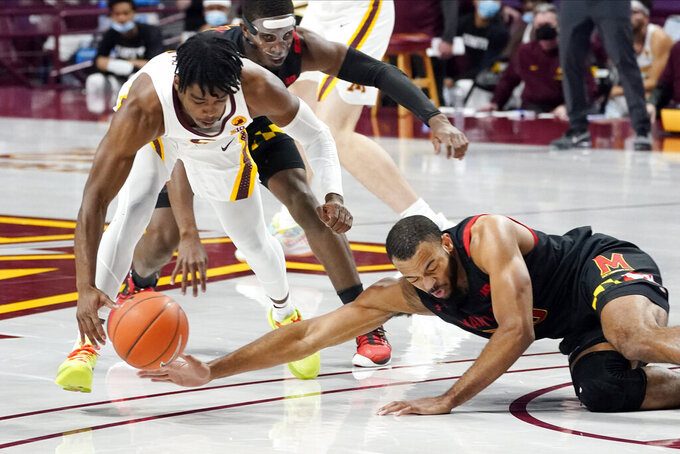 MINNEAPOLIS (AP) — Maryland paid another destructive visit to a Top 25 foe, leaving No. 17 Minnesota as the latest team that would have been wise to request a damage deposit.

The only breaks on this loaded Big Ten schedule have come by COVID-19-prompted postponements.

Eric Ayala had 21 points and three steals to help Maryland deliver another road upset of a ranked Big Ten opponent, a wire-to-wire 63-49 victory over Minnesota on Saturday.

“I wish we could bottle it all up and play that way every time, but we haven’t been able to do that yet,” said Terrapins coach Mark Turgeon, whose team never led by less than six in the second half.

Donta Scott added 15 points and 11 rebounds and Aaron Wiggins had eight points and 10 rebounds for the Terrapins (9-7, 3-6), who set a tenacious tone from the jump with strong perimeter pressure, long arms to deny the lanes and post traps to keep the Gophers out of sync.

Senior guard Darryl Morsell was the catalyst. He declared the bold goal of holding Minnesota under 50 points during one second-half timeout, an ambition even Turgeon dismissed at the time.

“We kind of tried to pride ourselves in the defense," Morsell said. "We understand with this team this year it’s going to be a lot different.”

Carr scored 25 points and grabbed seven rebounds for the Gophers (11-5, 4-5), who lost at home for the first time in 12 games this season. The rest of their starting backcourt, Gabe Kalscheur and Both Gach, combined for two points on 0-for-10 shooting. Liam Robbins had six points on 2-for-6 shooting before the 7-footer fouled out.

“If you’re going to have that, you better be phenomenal defensively,” coach Richard Pitino said.

The players in the visiting bench area made all the noise in the mostly empty arena, yelling “Boom!” every time a Terrapins 3-pointer went in. Turgeon, after one sequence on defense resulted in a block at the shot-clock buzzer, pumped his arm and crouched at the knees on the edge of the court.

With only a few dozen family members in the maroon seats, this was exactly the kind of game the Gophers could have used a crowd to get them going. Even their normally sound pick-and-roll coverage leaked, springing Ayala and others for uncontested layups.

“That’s probably the slowest we ever came out to a game," forward Brandon Johnson said. “We just made the mistake of thinking everything was just going to come easy.”

Minnesota didn't need a reminder about Maryland's potential, having squandered a 16-point second-half lead in a 74-73 loss here last year on Morsell's last-second 3-pointer. For all their struggles in this virus-interrupted season, the Terps already had two of the Big Ten's best wins: at No. 10 Wisconsin and at No. 22 Illinois.

Maryland built a football-like 17-3 lead, until Carr's 3-pointer past the 12-minute mark of the first half. Minnesota's only bursts of success came when Carr twisted his way to the hoop, and his jumper in the paint with 6:31 left cut the lead to 20-17 — the closest all game.

“What a great player he is,” Turgeon said, “but he really had to work.”

Maryland: With a 38-30 edge on the glass, the Terrapins improved to 8-0 when outrebounding an opponent this season. Giving up three to five inches to Robbins, the trio of Scott, Jairus Hamilton and Galin Smith did a remarkable job of not only denying Robbins the ball but the boards too.

Minnesota: The Gophers, who are last in the Big Ten in 3-point shooting, went 5 for 23.

“We settled for too many jump shots, and I think we’ve just got to do a better job of attacking and getting downhill. That’s where we’re at our best,” said guard Jamal Mashburn Jr.

With so many COVID-19 schedule alterations around the country, the AP Top 25 probably won't undergo significant changes with the next edition. The Gophers will take a tumble but likely remain ranked for a fifth straight week.

Maryland: Hosts Wisconsin on Jan. 27, a game moved up three days by the Big Ten to help ease rescheduling of virus-prompted postponements.

Minnesota: Plays at Purdue on Jan. 30, with seven days between games for a second straight week.

3 minutes ago
59 minutes ago
By Eric W. Bolin an hour ago
By Dave Skretta 2 hrs ago
2 hrs ago