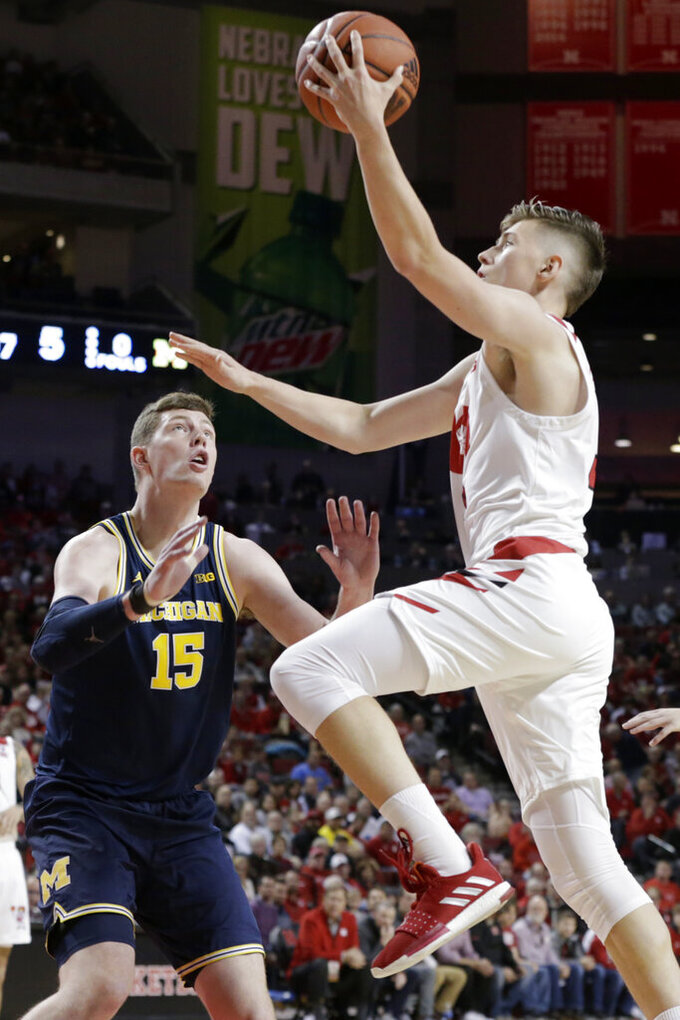 Nebraska's Thorir Thorbjarnarson goes to the basket against Michigan's Jon Teske (15) during the first half of an NCAA college basketball game in Lincoln, Neb., Tuesday, Jan. 28, 2020. (AP Photo/Nati Harnik)

The short-handed Wolverines got it by playing some of their best basketball in weeks in the middle of the second half against Nebraska.

The 79-68 victory Tuesday night ended a four-game losing streak, their longest since 2014-15, and gave them their first road win of the season.

“It feels like a lot of pressure has been lifted off of our shoulders, but obviously we still have a lot of work to do,” said Eli Brooks, who led Michigan with 20 points, nine rebounds and four assists. “Coming up is a big stretch. There's a lot of momentum going into that with this win.”

The Wolverines (12-8, 3-6 Big Ten) got the win without two starters. Senior captain and national assists leader Zavier Simpson was suspended for violating team rules and Isaiah Livers is out indefinitely after aggravating a groin injury against Illinois on Saturday.

“We’re at a point where we have to go all out,” Haanif Cheatham said. “We came in knowing this season was going to have ups and downs. Right now we’re in a tough stretch. We have to pull together for these next 10 games and not pull apart.”

Kevin Cross's step-back jumper from the baseline gave the Cornhuskers their last lead, 52-50, before Michigan went on a 21-4 run to go up by double digits.

Franz Wagner, who had 18 points, started the run with a 3 from the top of the key. Brandon Johns Jr. made a 3 and dunked over Jervay Green on his way to a career-high 16 points.

Michigan began dominating the inside, opening up the perimeter for Brooks, and the Wolverines were able to score transition baskets as Nebraska struggled with its shooting. The Huskers missed 11 of 12 shots over a nine-minute stretch and went scoreless for four while the Wolverines pulled away.

Cam Mack made a season-high five 3-pointers and led the Huskers with 19 points, nine assists and seven rebounds. Cross and Cheatham had 17 apiece.

“The thing I have to prevent is the ‘Here we go again' (attitude),” Nebraska first-year coach Fred Hoiberg said. “I have to do a better job with this group, when the tough times hit and the heads drop, this is too good a league, and we have too thin a margin to overcome that.”

In memory of Kobe Bryant, the retired NBA great who died in a helicopter crash Sunday, the Wolverines took an intentional 10-second backcourt violation after winning the opening tip, and the Huskers took an intentional 30-second shot clock violation on their first possession. The gestures were greeted with applause from fans, officials, coaches and players.

There were 24 seconds of silence before the game, with Bryant's numbers 24 and 8 displayed on the clocks over the baskets and his picture on the big screen.

Michigan coach Juwan Howard said he told Hoiberg before the game that his team was going to hold the ball on its first possession, and Hoiberg agreed that his team would do the same.

“I thought that was beautiful, because Fred and I both played against Kobe, and yes, I saw NBA teams do it, and I think it's very respectful to give the respect to a man who has given so much to the game of basketball and inspired all of us,” Howard said.

Michigan: This was a gritty win for the Wolverines, who were coming off a 64-62 home loss to Illinois on a last-second shot. They could ill afford to have a loss to the No. 158 team in the NET rankings on their NCAA Tournament resume.

Nebraska: The Huskers came close to knocking off nationally ranked Rutgers on Saturday but couldn't match that effort at home, getting outrebounded 41-27 by the bigger Wolverines and missing 15 of their last 20 shots.