A miracle or a trend? Saint Peter's a sign of parity in NCAA 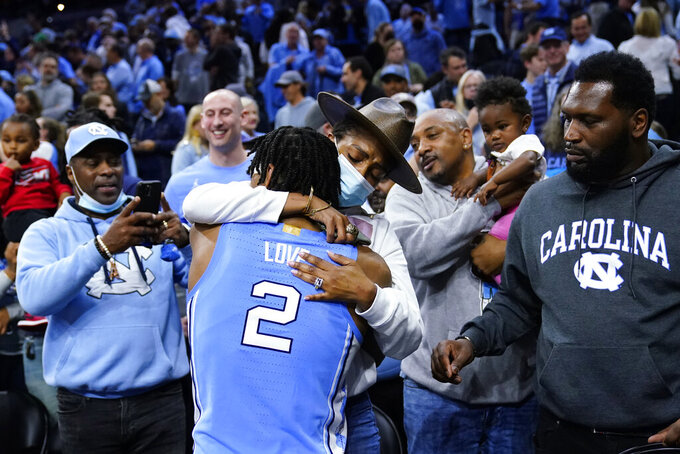 North Carolina's Caleb Love gets a hug after North Carolina won a college basketball game against UCLA in the Sweet 16 round of the NCAA tournament, Friday, March 25, 2022, in Philadelphia. (AP Photo/Matt Rourke) 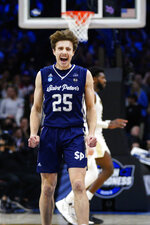 One twist: While the run to the cusp of the Final Four by tiny Saint Peter's has been riveting, it's also the latest example of how something that once felt like a miracle at the NCAA Tournament might be growing more common in years to come.

The Peacocks, who play No. 8 seed North Carolina on Sunday with a trip to New Orleans on the line, have joined Florida Gulf Coast and Oral Roberts as the third No. 15 seed in a decade make it to the second weekend of the tournament. Since the bracket expanded to 64 teams in 1985, the 15 seeds have a 14-140 record. Eight of those 14 wins have come since 2012.

Coach Shaheen Holloway’s Peacocks are the first 15 to make it to the Elite Eight. And while America is embracing the Saint Peter's story — who wouldn't love a 2,200-student commuter school on a busy street in Jersey City trying to put the screws to Tobacco Road? — the Peacocks themselves are soaking it in without taking that seeding so seriously.

“Some of these guys feel like they belong at schools like that,” said Holloway, whose team started this run with a win over Kentucky and beat Purdue on Friday night.

Four years ago, the unthinkable during March Madness stopped being unthinkable. A 16 seed, UMBC, topped No. 1 Virginia in the first round. This year, three of the four No. 1s were gone after the Sweet 16. Only Kansas, which plays 10th-seeded Miami on Sunday, remains.

Explanations for ever-increasing parity in college hoops come from all angles.

Holloway is among those who say the era of the one-and-done, stemming from the rule that allows players to enter the NBA draft after one year of college, might have subtly shifted the advantage to programs that don't pursue those kind of players and, thus, spend time together building a team.

“You get the Kentuckys of the world with all these great players,” Florida Gulf Coast athletic director Ken Kavanagh said. “Yeah, it worked out well with Carmelo Anthony (at Syracuse in 2003), but other teams, it hasn’t worked out as well because you’re playing older teams, teams that have played together for four years.”

Another factor are the recently liberalized transfer rules that allow players to change schools without having to sit out for a year. Some see that as an element that also could also degrade team-building.

“It’s kids wanting to get back closer to home who went away,” said Miami coach Jim Larrañaga, who led George Mason to the Final Four as an 11 seed in 2006. "Or, ‘I’m sitting on the bench someplace but I think I could start at the other school.’”

Another part of this evolution comes from the proliferation of AAU and summer leagues that make all players familiar to each other before they ever step onto a college floor. Though their programs could not be more different, Sunday will not mark the first time the players from Saint Peter's will go against the guys from North Carolina; the Tar Heels roster includes three McDonald's All-Americans in Caleb Love, R.J. Davis and Armando Bacot.

“We definitely played against most of these guys,” Peacocks forward KC Ndefo said. “It’s just basketball at the end of the day.”

Nothing, however, seems to make basketball more beautiful than when teams come “from out of nowhere."

Remember Jim Valvano looking for somebody to hug? His North Carolina State team, which brought the word “Cinderella” to the March Madness dance, was a 6 seed (in a 52-team field). Two years later, Rollie Massimino's Villanova underdogs were seeded eighth when they knocked off Georgetown.

Butler's small-school underdog story — the team that practiced in the gym where they filmed “Hoosiers” — was a beauty. The Bulldogs were a 5 seed when they made the national final in 2010.

Wichita State made it to the Final Four as a 9 seed in 2013. Before that, VCU and Larrañaga's George Mason made it as 11s.

North Carolina could make it this year as an 8. But it's North Carolina. The Tar Heels are 8 1/2-point favorites against Saint Peter's, according to FanDuel Sportsbook.

“Coach told us he never looked at seeding and he never really cared,” said Bacot, whose team has now knocked off a No. 1 (Baylor) and a 4 (UCLA) to come within a game of the program's 21st Final Four.

Still, there's something magical about that number — “15” — perched next to the name “Saint Peter's” on the bracket.

That will always be true, Holloway insists, whether this is the last time a team like his gets this close — or the first of many more to come.

“Yes, we’re the underdogs. Yes, we’re the Cinderella team," Holloway said. “But at the end of the day, we’re a team that’s ramping up just like anyone else. You take the name off the front of the jersey, it really doesn’t matter.”