Missouri leaning on depth, balance over big names this year 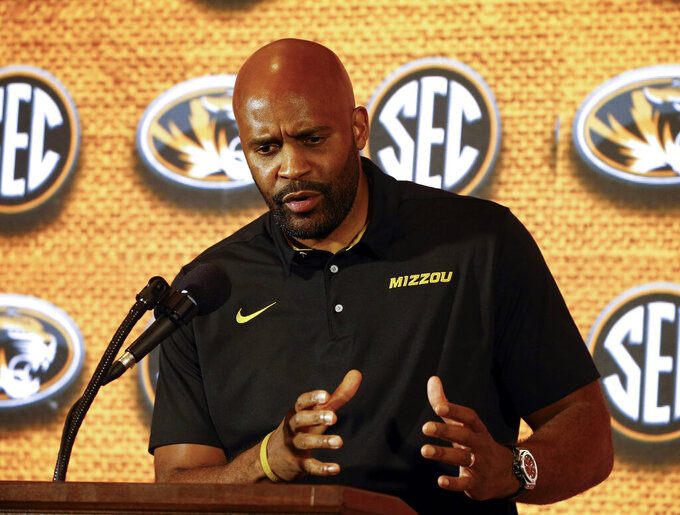 FILE - In this Oct. 17, 2018, file photo, Missouri coach Cuonzo Martin speaks during the SEC men's NCAA college basketball media day in Birmingham, Ala. There is no five-star prospect for Missouri to hang its hopes on this season, nor is there a hot-shot brother of a five-star prospect who himself brought the Tigers big expectations. Instead, Martin might have his most complete and compelling team since arriving in Columbia, one that figures to improve significantly on its 5-13 record in the SEC last season. (AP Photo/Butch Dill, File)

Instead, coach Cuonzo Martin might have his most complete and compelling team since arriving in Columbia, one that figures to improve significantly on its 5-13 record in the SEC last season. Even if the Tigers have been picked to finish second-to-last in the league.

"For me, that doesn't bother me because my job is the same every day," Martin said, "making sure they're successful. Whatever number you put in front of the team, that has nothing to do with me."

There were better numbers put in front of Missouri the past couple seasons, but injuries derailed dreams of postseason success. Two years ago, it was one-and-done star Michael Porter Jr. whose back problems torpedoed the plans, and last season it was little brother Jontay Porter whose torn ACL in a scrimmage in October not only ruined their plans but led to him going undrafted.

At least everybody should be healthy for the start of this season.

The Tigers still figure to run everything through the paint, though it will be junior forward Jeremiah Tilmon who gets the majority of the work. The 6-foot-10 big man struggled with foul trouble all last season, but still averaged 10.1 points and 5.9 boards when he stayed on the court.

The big difference his season is an abundance of experienced and talented help on the perimeter, where Jordan Geist was the only real loss. Dru Smith arrived as a transfer from Evansville, where he averaged nearly 14 points a game, and will be joined by junior Mark Smith and a trio of sophomore guards in Torrence Watson, Javon Pickett and Xavier Pinson.

Throw freshman guard Mario McKinney in the mix and the Tigers should have a deep backcourt.

"What happens when you have a lot of guys returning — and I'll say a lot including Dru, even though he didn't play (at Missouri) — is that practice can be boring," Martin said. "There are still things you need to work on. You can easily fall into a trip, 'This is just a scrimmage against each other.' But I think we're all ready to start playing some games."

Axel Okongo missed time with turf toe and Tilmon was briefly sidelined with back pain, though both big men should be fine for the season. Mark Smith is also on track to play in the opener after an ankle injury last season. None of the injuries is as serious as were those to the Porter brothers.

The biggest star of the Tigers' open practice during homecoming weekend was McKinney, a touted freshman from St. Louis. He's a proficient shooter with the ability to jump out of the gym.

The biggest foul problems Tilmon ran into last season were moving screens and his insistence on hammering guys at the rim. The Tigers were efficient on offense when he was on the court but downright abysmal when backup Reed Nikko was forced to take his place.

The season got off to a rocky start when Watson was cited for drunken driving on Sept. 29 following a traffic stop for driving without headlights. Missouri guidelines call for athletes arrested for first-time drunken-driving offenses to serve a minimum one-week suspension.

"Obviously he's handled that situation," Martin said. "A valuable, painful less, again hopefully one you learn from and grow from but again, very unfortunate, because we talk about that all the time."

SETTING UP THE SKED

Missouri opens the season Nov. 6 against Incarnate Word and plays Northern Kentucky two days later before an immediate test at Xavier. The Tigers highlight the Hall of Fame Classic in nearby Kansas City, take on Temple and Illinois in December and play West Virginia in January in the Big 12-SEC Showdown.