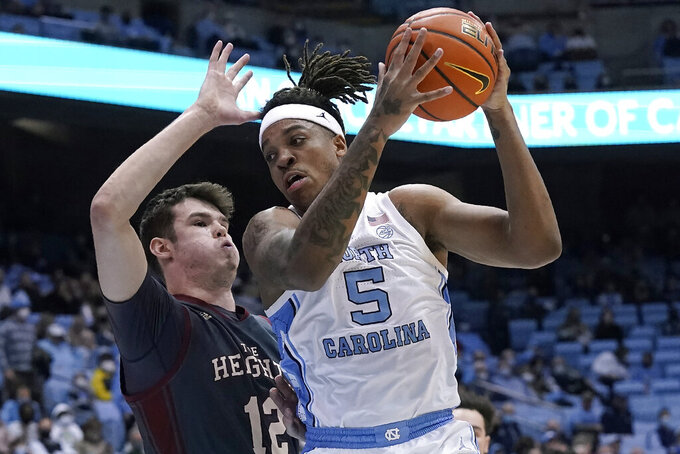 The preseason focus for North Carolina’s Armando Bacot was about improving his shooting range for his long-term development and potential NBA career.

The growth in one of his primary skills could prove just as vital to getting there: The junior has gone from being a good rebounder to a great one while leading the Tar Heels’ offense with his work inside.

First-year coach Hubert Davis said Bacot had worked on ballhandling and perimeter shooting – making 1,000 3-pointers every week during the summer — to improve his NBA chances. But he credited Bacot for not abandoning his strengths while trying to expand his game.

“The thing that I’m just so impressed with him about is, there's a lot of times where guys would work on that during the summer and they would change their game and it would go away from what they do best,” Davis said. "And even though Armando can shoot the ball from outside … the things that he does best is finish around the basket and rebound the basketball.”

STRENGTHS: He's been a relentless, one-man crew on the glass. Bacot tallied 22 rebounds against Virginia and 20 against Virginia Tech in January, then had 22 in Tuesday's overtime win at Louisville.

He joins national rebounding leader Oscar Tshiebwe of Kentucky as the only Division I players with at least three games of 20-plus rebounds this year.

“The best rebounders I've seen that can go get rebounds out of their area, they start with great positioning," Hancock said. “I think he does a really good job of wedging himself, constantly working to get that inside position. And then he's big enough and strong enough where if you're going to go take one from him, you've really got to go foul him.”

WEAKNESSES: While he's more willing to step outside, Bacot has hit just 1 of 6 3-pointers in 22 games after attempting just one through his first two seasons. He has also seen his free-throw shooting marginally improve from 64.5% as a freshman to 67% now.

It will help his NBA chances to get a bit more out of both areas, especially with Hancock noting teams are trying to be “ultra-physical” to wear him down.

“In terms of making them play you a different way, that comes with a jumpshot and then the other side is keep improving with your body so you don't get worn down," Hancock said.

Some other NBA prospects around the Atlantic Coast Conference:

KEVE ALUMA, Virginia Tech: The 6-9, 235-pound redshirt senior is averaging 15.2 points and 6.3 rebounds entering Wednesday's game against Georgia Tech. He got off to a bad start with his outside shot but has shown the ability of hitting from 3-point range (35% last year).

BUDDY BOEHEIM, Syracuse: The 6-6 senior nicknamed “Buddy Buckets” entered Wednesday's game against North Carolina State ranked second in the league at 19.4 points. The floor-stretcher has made 10 3-pointers in the previous two games.

MICHAEL DEVOE, Georgia Tech: The 6-5 senior enters the Virginia Tech game ranked third in the ACC at 18.8 points and is shooting 39% from behind the arc. He's also averaging a career-best 5.1 rebounds along with team highs in assists (3.3) and steals (1.6).