No. 1 Gonzaga falls at Saint Mary's on tough day for Top 10 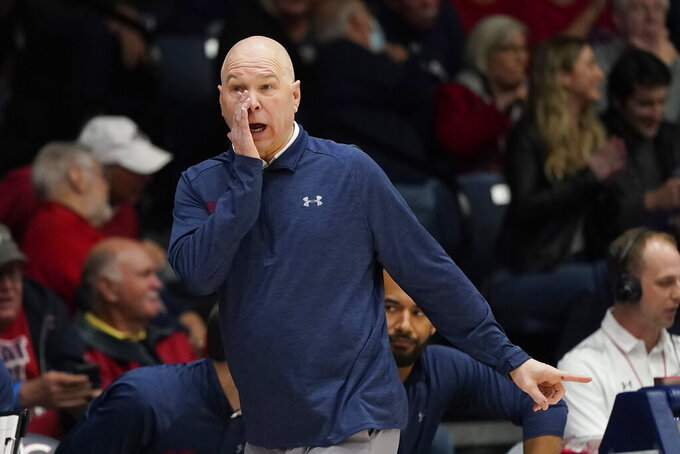 MORAGA, Calif. (AP) — Saint Mary’s finally has its first perfect record at home -- and a memorable win over top-ranked Gonzaga to go with it.

Tommy Kuhse had 14 points and six rebounds for No. 23 Saint Mary’s, which beat No. 1 Gonzaga 67-57 on Saturday night to prevent the Bulldogs from completing another undefeated run in the West Coast Conference.

“That's really special," Gaels coach Randy Bennett said after his squad completed a 16-0 run at McKeon Pavilion. “It’s been hard to get. We lost it one year to Loyola Marymount in our last home game. It’s been something hard to get and we finally got it. Especially when it’s against the No. 1 team in the country, it just makes it … a night you’ll never forget.”

The top six teams in the AP poll all lost Saturday, and seven of the top nine; only No. 7 Duke won.

Saint Mary’s ended Gonzaga’s 17-game winning streak, beating a No. 1 team for the first time since knocking off the Bulldogs in the 2019 conference tournament title game.

Fans poured onto the court in a wild celebration of the Gaels’ 18th consecutive win at McKeon Pavilion dating to last season.

Matthias Tass added 13 points for the Gaels (24-6, 12-3) and made a pivotal block with 1:15 remaining. Kyle Bowman made a pair of clutch 3-pointers after missing his first seven shots.

“I wanted to go in the middle of the circle and kiss the logo but people were running on the court so it was difficult,” Tass said. “It was definitely a surreal moment.”

Saint Mary’s had lost seven straight to its rivals from the Pacific Northwest, including five straight at home, before stunning the Bulldogs.

Gonzaga had beaten the Gaels handily two weeks earlier and had won 34 consecutive conference games, 33 by double-digits. But Saint Mary’s never let Gonzaga get comfortable on Saturday, leading from start to finish while winning their fourth straight since that loss in Spokane.

“They were extremely more aggressive. They got after us and played us really really physical,” Few said of Saint Mary's. “That was it. When you’re the most aggressive team and most physical team, probably nine times out of 10 you’re going to win.”

Gonzaga trailed by 16 with 13 minutes remaining and got to 57-50 before Bowen buried a 3-pointer. The Bulldogs responded with four points, but Bowen made another 3 and Logan Johnson sank a pair of free throws.

The game drew a packed house at McKeon Pavilion, with scouts from the Warriors, Knicks and Pistons in attendance.

Two nights after thumping San Francisco 89-73, Gonzaga appeared sluggish and out of sync. The Bulldogs shot 31% in the first half and were outscored 17-5 over the final seven minutes before the break.

Timme, who was taunted by Gaels fans before the game as he practiced shooting from midcourt, was smothered by defenders every time he got the ball in the paint. Gonzaga’s leading scorer missed all eight shots he took in the first half, was called for a three-second violation in the key in the second half and nearly got a technical foul after inadvertently tossing the ball near a referee’s head.

“He got his touches but after three or four bounces we had three guys surrounding him and knocking the ball out of his hands in the first half,” Tass said. “That kind of ruined his rhythm. It was hard for him to bounce back from that.”

Gonzaga: Timme was a non-factor for most of the game, which put the Bulldogs into a big hole they never got out of. The final score was not indicative of how dominant St. Mary’s was. Gonzaga is 0-3 this season when trailing at the half.

Saint Mary’s: Bennett spent the week telling anyone who would listen that he liked his team’s chances. He was rewarded with the Gaels' biggest win in more than three years, a victory Bennett called one of the most significant in program history.

Both teams will get an extended break before playing in the WCC tournament in Las Vegas in March. Gonzaga is the top seed and Saint Mary’s is No. 2. Both will get byes and won’t have to play until the semifinals on March 7.