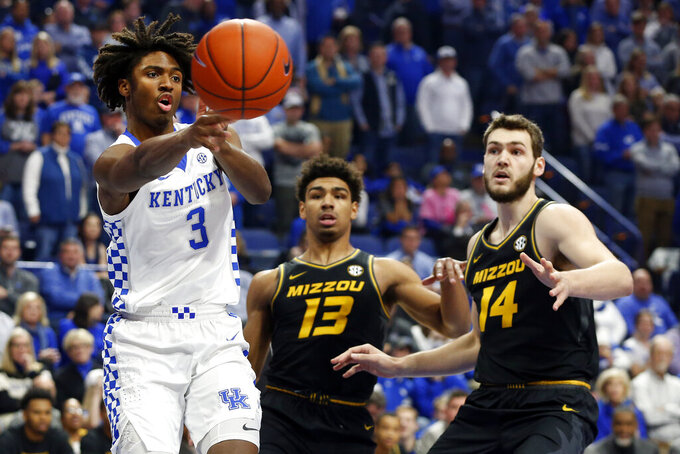 Kentucky's Tyrese Maxey (3) passes around the defense of Missouri's Mark Smith (13) and Reed Nikko (14) during the first half of an NCAA college basketball game in Lexington, Ky., Saturday, Jan 4, 2020. (AP Photo/James Crisp) 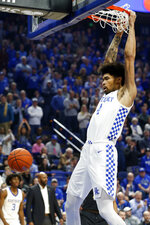 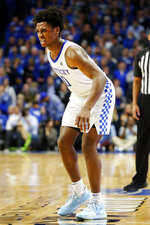 LEXINGTON, Ky. (AP) — Nick Richards carried the load for No. 17 Kentucky before Immanuel Quickley finished the job for the Wildcats.

Quickley scored a career-high 23 points, Nick Richards had 21 and Kentucky beat Missouri 71-59 Saturday in the Southeastern Conference opener for both schools.

“My way of changing a game is usually a 3-point shot," said Quickley, who surpassed his previous best of 18 points from last Saturday's victory against Louisville. “We've got other guys, they dunk, they block shots. Any way you can change a game, you want to use that to the best of your ability."

Richards went 9 for 13 from the field and grabbed 12 rebounds for his second consecutive double-double. The junior forward also blocked four shots before fouling out with 3:52 left.

In between blocking shots and grabbing rebounds, Richards worked his way free for scoring opportunities, including a few jumpers.

“All the workouts I've been through, eventually it was going to show up on the court," said Richards, who posted his sixth double-double this season. “My coaches told me not to be arrogant with it, just be humble and everything will just fall through."

Kentucky posted its second straight victory since consecutive losses to Utah and Ohio State. But the Wildcats lost point guard Ashton Hagans with 1:48 left after he hurt his left ankle while playing defense.

Hagans finished with seven points, seven assists and five rebounds. Coach John Calipari said it was a low sprain instead of an Achilles tendon tear that he initially feared.

“When they told me it wasn't that, OK, we can deal with whatever else it is," Calipari said. “Maybe he's out. Maybe he doesn't play against Georgia (on Tuesday). Then you're going to see the impact and importance he has on this team.”

Dru Smith had 11 points and Kobe Brown nine for Missouri, which had won four in a row. The Tigers shot 36% and were outrebounded 36-31.

Missouri: The Tigers' quest for their first-ever Rupp Arena win began well enough as their defense aggressively denied inside chances while their shooters delivered from outside. That physical game also helped put Kentucky on the line often, resulting in a huge disparity on free throws. They didn't have an answer for Richards, who was free on most of his opportunities.

“I think he was the difference-maker," Missouri coach Cuonzo Martin said. “They got more points from their bigs than we did from ours."

Kentucky: The Wildcats started sluggishly after a week off, missing six of seven shots while allowing the Tigers to make shots from deep. Richards was the steadying presence on both ends, but especially with the ball, converting a pair of 3-point plays to keep them in the game before Quickley delivered from deep. Freshman guard Johnny Juzang was sidelined by an illness, leaving them with just eight scholarship players, and the roster might be even shorter depending on Hagans' status.

“We just have to pick up the little stuff that he does," Quickley said. “He gets everybody involved, so we're going to have to be an even better passing team than we already are. He's a leader, you know?”