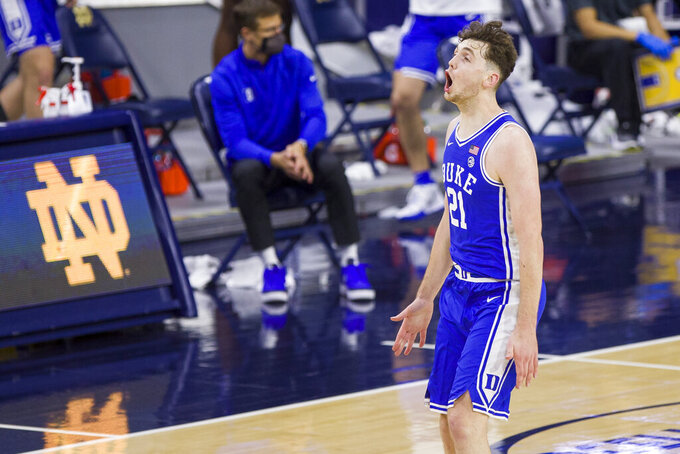 Duke's Matthew Hurt (21) celebrates after a big play during the second half of an NCAA college basketball game against Notre Dame on Wednesday, Dec. 16, 2020, in South Bend, Ind. Duke won 75-65. (AP Photo/Robert Franklin) 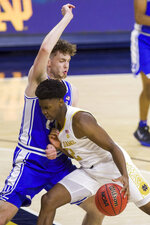 SOUTH BEND, Ind. (AP) — Playing on the road for the first time in their collegiate careers did not rattle Duke’s talented freshmen. They were looking forward to it.

“It was great, just getting to see different scenery, getting to see some snow out here,” DJ Steward said after scoring 16 points and grabbing a team-high seven rebounds to help the 21st-ranked Blue Devils beat Notre Dame 75-65 Wednesday night.

“I’m used to the snow,” added Steward, a Chicago native, “but a lot of our guys aren’t.”

Even the atmosphere inside the arena caught Steward’s attention. While the Fighting Irish are allowing a light smattering of family and friends to attend games during the pandemic, Duke hasn’t been permitting any outsiders back home at Cameron Indoor Stadium.

“You can kind of feel the energy a little bit,” Steward said of the contrast.

“We’re ecstatic about the win,” coach Mike Krzyzewski said. “(Notre Dame coach Mike Brey’s) team is a very difficult team to defend. They have all these shooters and he’s one of the best in teaching offense, and they’re a veteran team, so for our guys to beat them, we feel great about it.”

“I was disappointed in our defensive positioning most of the night,” Brey said after the Blue Devils shot 52% from the field and 8 of 15 from 3-point range. “I thought we could sit down in a stance better, and we never did that enough to really make it interesting.”

Except for a 2-all tie, the methodically effective Blue Devils led throughout.

The Blue Devils outscored the Irish 34-20 in the paint, outrebounded them 33-23 and committed just eight turnovers to ND’s 12.

Duke: The Blue Devils showed few ill effects one day after announcing that highly regarded freshman Jalen Johnson (11.8 points, 8.3 rebounds, 2.0 blocks per game) will be out indefinitely due to a foot injury. Roach, Steward and Brakefield each demonstrated smoothness that belied them playing in their first collegiate road game.

Notre Dame: The Irish continued to flounder against ranked teams, dropping to 0-3 this season and losing for the 24th straight time to such clubs since their November 2017 win over Wichita State. Notre Dame has seven more games on its schedule against teams that are currently ranked.

With the NCAA on Wednesday granting all Division I transfers immediate eligibility this season, Notre Dame’s Trey Wertz made his season debut.

“It was kind of tough because I didn’t know it was going to happen,” said Wertz, who averaged 11.9 points and 3.9 assists as a sophomore last season at Santa Clara. “I prepared like I was going to play, even though we didn’t find out until later this afternoon.”

Wertz scored nine points in 20 minutes off the bench.

“I thought he did everything we asked of him and got more comfortable in the second half,” Brey said. “And he may have been our best defensive guard. … He’s going to be a big, big part of things moving forward.”

Duke: The Blue Devils are off until hosting Pittsburgh on Dec. 29. With two other games in the window canceled, Notre Dame represented Duke’s only contest over a span of 20 days.

Notre Dame: The Irish face Purdue on Saturday as part of the 10th annual Crossroads Classic in Indianapolis. Notre Dame is 3-1 against the Boilermakers in Classic matchups.