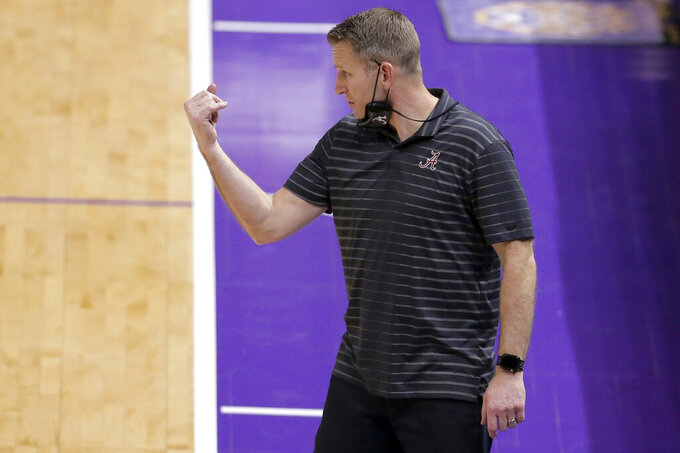 Alabama coach Nate Oats gives directions to the team during the second half of an NCAA college basketball game against LSU in Baton Rouge, La., Tuesday, Jan. 19, 2021. (AP Photo/Brett Duke)

BATON ROUGE, La. (AP) — Alabama coach Nate Oats was concerned his team might lose its sense of urgency when it took the court as a member of the AP Top 25 for the first time in three seasons.

Petty made four 3-pointers before four minutes had elapsed, finishing with 24 points on eight 3s, and the 18th-ranked Crimson Tide set a Southeastern Conference record by making 23 shots from beyond the arc in a 105-75 rout of LSU on Tuesday night.

“I was worried about our attitude coming into the game,” Oats said. “Petty was great at the start of the game. We came in locked in on defense and ready to play on offense. We were pretty efficient on both sides of the ball.”

Petty was 8 of 10 from long range. Freshman Joshua Primo was 6 of 8 from deep and scored 22 points, and Villanova transfer Jahvon Quinerly also scored 22 on 6-of-7 3-point shooting as the three players combined for all but three of Alabama’s 3-pointers. Herb Jones had 13 points while making just one 3 for the Crimson Tide (12-3, 7-0 SEC).

“This was the first time I have been a part of a game where multiple guys made that many 3s,” said Petty, who set the Alabama record for career 3-pointers in the previous game against Arkansas. “It was just our mentality going in. We knew what was at stake.”

After Petty got the Crimson Tide started, Primo added 3-pointers on back-to-back possessions to put Alabama in front 18-4 less than four minutes into the game. The Crimson Tide had a 30-8 lead following a 3-pointer by Quinerly with 13:20 remaining in the first half. Quinerly’s 3 was Alabama’s eighth of the half.

Alabama’s largest lead was 31 points late in the first half, and LSU never got closer than 26 points after halftime.

“We got whipped in every facet,” LSU coach Will Wade said. “Petty was hot at the start with all those 3s. It was an all-systems breakdown starting with me. The guys did not have the right energy or the right hunger needed for this game. Don’t put that on the players. Put that on me.”

Alabama: Oats’ team has been dominant in the first half of the SEC schedule. Alabama has won its first seven league games for the first time since 1987.

LSU: The Tigers’ poor defense was on display again. LSU allowed at least 80 points in SEC wins over Georgia and South Carolina. But the Tigers could not keep up with the Crimson Tide’s hot shooting.

Alabama entered the game making 34% of its 3-point shots this season. The Crimson Tide shot 54% from beyond the arc against LSU. Aside from Petty, Quinerly and Primo, the rest of the team went 3 of 18 on 3s.

All four of LSU’s top scorers were held below their per-game average. Thomas, Watford, Smart and Darius Days came in scoring a combined 60 points per game. They totaled 48 points on 16-of-47 shooting (34%) against the Crimson Tide.

LSU: At Kentucky on Saturday.