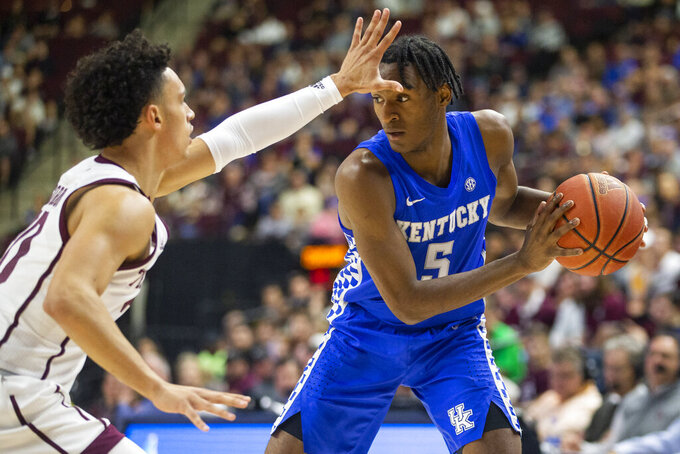 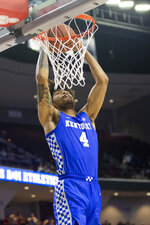 COLLEGE STATION, Texas (AP) — Immanuel Quickley swears he had no idea he'd made a career-best eight 3-pointers on Tuesday night until he looked at the boxscore after the game.

“I really thought I had four and then I looked at it and said, ‘I don't remember any of those,'" he said.

Quickley also set a career-high with 30 points thanks to his hot long-range shooting to lead No. 8 Kentucky to its seventh straight win, 69-60, over Texas A&M.

While he didn't seem to be aware of what kind of night he was having, his teammates certainly were.

Quickley is the first Kentucky player with consecutive games with at least 25 points since Malik Monk in 2017. The sophomore scored 26 in a win over Florida on Saturday.

Kentucky (23-5, 13-2 Southeastern Conference) was up by 13 and the Aggies hadn't made a field goal in more than eight minutes when Quenton Jackson ended the drought with a dunk with about 6 minutes to go. That was the start of a 8-2 run by Texas A&M that cut the lead to 57-50 with about 4 minutes left.

Quickley ended the run with a jump shot and hit another 3-pointer after a free throw from Josh Nebo to make it 62-51 with about 90 seconds left to secure the victory. He was equally effective in the first half, making consecutive 3-pointers that thwarted another Texas A&M spurt.

While Quickley's teammates raved about his big night, coach John Calipari was reticent to do so to the point that a reporter finally asked him why he was downplaying the performance.

Though Calipari finally lauded Quickley, it didn't come until after he'd complained about what he did on one play before halftime.

“At halftime, I wanted to choke him because we set up a play for Nate (Sestina) to shoot a 3 and he was wide open and (Quickley) shot a ball," Calipari said. “I went crazy. Are you kidding me?"

Wendell Mitchell had 18 points for Texas A&M (14-13, 8-7), which had a three-game winning streak snapped. The Aggies have lost nine straight games to ranked opponents, with their last win against a team in the Top 25 coming on March 18, 2018, when they beat No. 10 North Carolina.

Texas A&M coach Buzz Williams said they executed their defensive plan well, but that it just didn't work out because of Quickley's performance.

“Our premise defensively is to do everything we can do to keep the ball out of the paint," he said. “We want to force the team to shoot more 3s than normal."

He said he didn't consider changing that philosophy even when Quickley got going.

“There were just too many times we were just a second late," he said.

Kentucky: Quickley, the SEC's player of the week last week, seems to get better every game and is peaking at the right time. His ability to knock down 3s makes it difficult to slow him and the Wildcats down. It was his third straight game with 20 points or more and his 17th in a row with at least 10.

Texas A&M: The Aggies had discovered some offense during their winning streak but had trouble scoring Tuesday and finished with their worst offensive performance of the season. They'll need to figure out how to be more effective on offense if they hope to close the regular season strong.

The Wildcats have had five players score 25 points or more this season for the first time since the 2015-16 season. Quickley is joined by Montgomery, Tyrese Maxey, Nick Richards and Hagans in the 25-point club. Calipari believes having so many players who have shown that capability will help his team in the postseason.

“In the tournament, if someone gets hot for your team and they know they can do it because they've done it one time, or twice or three times, that guy may help you win and advance in a game you weren't going to win," he said.

Kentucky: Hosts Auburn on Saturday after losing to the Tigers 75-66 on Feb. 1.

Texas A&M: Visits LSU on Saturday. The Aggies lost to the Tigers 89-85 in overtime in their first meeting this season.