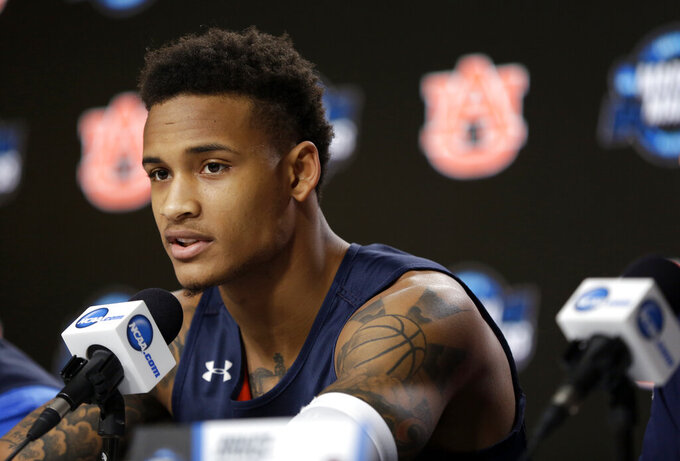 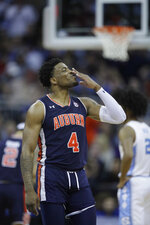 KANSAS CITY, Mo. (AP) — Nobody stepping onto the floor for Auburn in the Midwest Region semifinals on Sunday was recruited by Kentucky, the lone team standing in the way of the Tigers' first trip to the Final Four.

Nor were they recruited by Kansas. Or North Carolina.

Yet the fifth-seeded Tigers have already knocked off the Jayhawks and Tar Heels during their joyful romp through the NCAA Tournament. And if they manage to send Big Blue Nation and its roster loaded with NBA prospects back to Lexington, coach Bruce Pearl's plucky bunch of overachievers will have brought down the three winningest programs in college basketball history.

Never has that been accomplished in an NCAA Tournament.

"I wasn't recruited by any of those schools, but I feel like everybody is beatable," said Tigers forward Horace Spencer, who might best encapsulate the dichotomy between the two programs.

Kentucky (30-6) is led by three freshman starters and a dominant sophomore in P.J. Washington, all of whom are likely first-round draft picks. In fact, Keldon Johnson, Ashton Hagans and EJ Montgomery had offers from Pearl — and strongly considered Auburn — before Wildcats coach John Calipari swooped into the picture and offered them an opportunity to play at his NBA factory.

The trigger-happy Tigers (29-9), on the other hand, are comprised of overlooked, underappreciated guards and big men like Spencer, who has developed over four long years into a valuable player.

Together, they have the Tigers on the brink of history.

"It's bigger than basketball for us. Really, we're doing it for Auburn, because Auburn doesn't have that historic, winning tradition," Spencer explained. "It really feels good to see all the happy faces, all the smiles we're bringing to Auburn, you feel me? It feels good to make this history."

Just how historic? Consider this: Kentucky has won more Elite Eight games (14) than the Tigers have in the NCAA Tournament (10), and their only other trip to a regional final was 33 years ago.

Never has Auburn played in the Final Four, not even with Charles Barkley patrolling the paint.

The Tigers will have to take that next step without their most versatile player, Chuma Okeke, who tore the ACL in his left knee against the Tar Heels. Okeke had already scored 20 points and pulled down 11 rebounds when he went down late in the game, costing the Tigers their best matchup problem.

"I don't feel like Chuma deserves that at all," said Auburn guard Bryce Brown. "He works so hard, spends so much time in the gym, makes sure his body is right. It's our job to pick him up."

Pearl made it clear the Tigers remain confident, though. What was already an enormous challenge may have become nearly insurmountable, but they are still planning to show up at Sprint Center.

Calipari would expect nothing else.

"He's gotten the program to where people are absolutely excited," he said. "I'm telling you, there is no team in the country playing better than them right now, and we have total respect."

The game itself figures to be an intriguing mish-mash of styles.

The Tigers dropped 17 3-pointers in their win over North Carolina, and were just as dynamic from beyond the arc against the Jayhawks. The Wildcats counter with length, size and the kind of brutalizing defense that Calipari has always demanded of his best teams.

"They'll be ready," said freshman Tyler Herro, who hit the go-ahead 3-pointer and two crucial free throws in the Wildcats' semifinal win over Houston. "They're playing as hot as any team in the country. I think they will play their game and be ready to go."

Here are five more story lines as the Tigers and Wildcats play for a spot in the Final Four:

THREE'S COMPANY: Kentucky and Auburn have already met twice with the Wildcats winning a nip-and-tuck game on the road and a blowout at Rupp Arena. If not for the Wildcats' close loss to Tennessee in the SEC Tournament, they could be facing each other for the fourth time.

SPEAKING OF 3S: Brown broke the Auburn record with 133 3-pointers this season, and the Tigers have hit 438 in all, third-most in NCAA history. And Calipari said he expects more of the same on Sunday.

"If you have really good shooters," he said, "why wouldn't you do it?"

FIRED UP: The Tigers are undefeated this season when eating their pregame dinner at a Japanese steakhouse — they have one in particular that they frequent back in Alabama. They ate elsewhere before their first loss to Kentucky and in the hotel before their loss in Lexington, and Pearl made it quite clear that he would be scouring Kansas City for a steakhouse Saturday night.

"It's dinner and a show, of course. Our guys like the show," he said. "But it's double everything. They want to eat it and take it home. I don't know if that's an extra benefit or not. Maybe it is."

I CANNOT TELL A LIE: Washington acknowledged he was using pain killers to get through the regional semifinal, his first game back from a foot injury. But after scoring 16 points against Houston, and after a good night's rest, the rangy forward said he was feeling better ahead of Sunday's game.

HOME, SWEET, HOME: Reid Travis's long journey through college basketball could lead him right back home. He grew up in Minneapolis before beginning his career at Stanford, then transferred to Kentucky for his senior season. With a win Sunday, he'll head back to the Twin Cities for the Final Four.

"I'm really excited for it," he said, "but no more than any other game. If you look like it as going home, that's really too much weight to put on it."