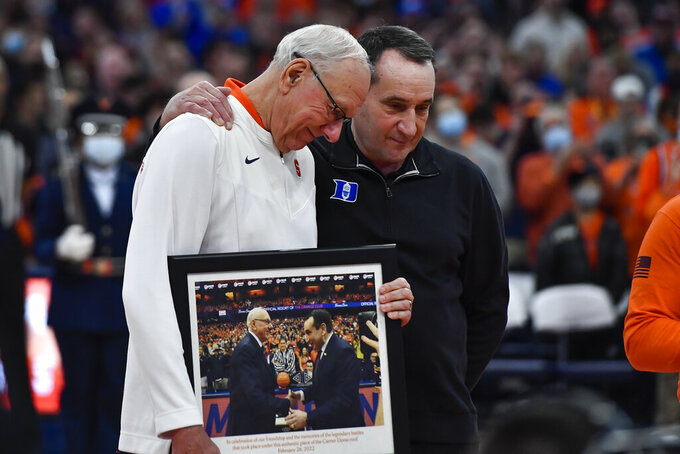 SYRACUSE, N.Y. (AP) — Syracuse coach Jim Boeheim said Wednesday on a sports radio call-in show that there's a plan in place for when he steps down.

Boeheim did not reveal any details of the arrangement because that could have an effect on recruiting. He said the university will decide when to make it public and he expects to have input on the selection of his replacement.

The 77-year-old Boeheim, the second-winningest coach in Division I history with 997 victories, behind only Duke's Mike Krzyzewski, is nearing the end of his 46th season at the helm. He has said repeatedly that he intends to coach next season with a handful of freshmen enrolling.

Syracuse (15-15) had a 25-point loss to Duke at home on Saturday night. It has one game remaining in the regular season against Miami on Saturday in the Carrier Dome, before the ACC Tournament begins. Boeheim has never had a losing season.

“At the end of the day, I can promise you that I’m trying to leave this program in the best position that it can be in when I leave,’′ Boeheim said. “I think we will be able to do that.’’

This is the second plan for Boeheim’s retirement. When Syracuse was hit with NCAA sanctions in 2015 and Boeheim had 101 of his victories vacated, former assistant coach Mike Hopkins was designated to succeed him. Instead, after 25 years with the program as a player and a coach, Hopkins suddenly departed in March 2017 when he was offered the job at Washington and Boeheim continued to coach the Orange.