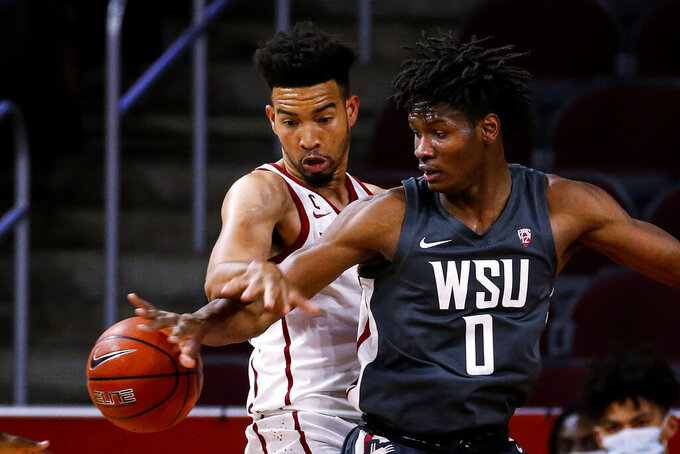 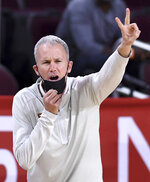 LOS ANGELES (AP) — Tahj Eaddy scored 14 of his season-high 21 points in the first half and Southern California defeated Washington State 85-77 on Saturday night for the Trojans’ sixth straight victory.

USC (11-2) improved to 5-1 in Pac-12 play for the first time since 2002. Evan Mobley had 16 points despite four fouls. Drew Peterson added 15 points and 11 rebounds. Eaddy played the second half with three fouls as did Isaiah Mobley.

Washington State closed to 73-69 with an 11-0 run, highlighted by consecutive 3-pointers from Andrej Jakimovski and Noah Williams, who followed with a three-point play.

Williams again drew the Cougars within four on a 3-pointer, but they could never take the lead.

Eaddy and Evan Mobley scored back-to-back. The Trojans kept a long possession alive with a couple of offensive rebounds before Isaiah White scored under the basket to keep them ahead by 10 points.

Isaiah Mobley completed a three-point play and Eaddy hit a basket for a 5-0 run to open the second half and extend USC's lead to 15 points — its largest of the game.

There was no rhythm to the final 20 minutes, with a steady stream of fouls disrupting the flow of play. Tony Miller was called for a flagrant foul after a video review, and White made both to keep USC ahead 73-58. White, alone on the free throw line, pretended to slap hands with his teammates.

The Cougars kneeled and linked arms during the national anthem.

Washington State: The Cougars dropped both their games in Los Angeles, losing by 30 points at UCLA. Bonton, a senior, carried them in both games, with 23 points against the Bruins. Freshman Jakimovski ran into a brick wall after being the Cougars' top 3-point shooter coming into the weekend. He was held to six points after making just two 3s against the Trojans.

USC: After blowing out Washington by 27 points to start the weekend, the Trojans are getting closer to breaking into the Top 25 for the first time this season.

USC: At Oregon State on Tuesday in the first of three straight road games.