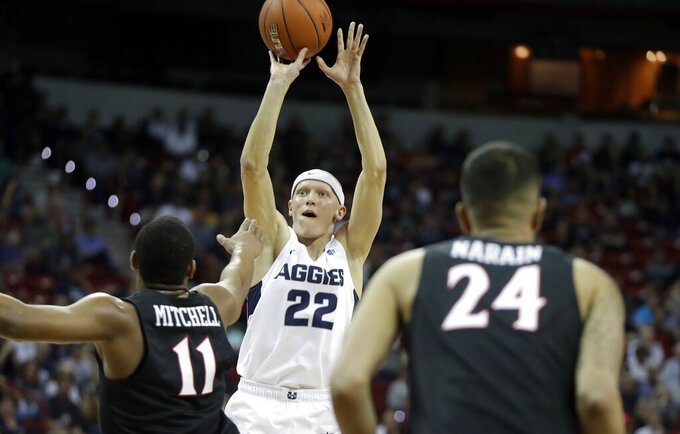 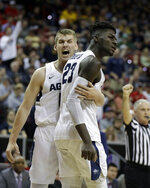 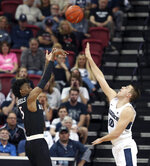 LAS VEGAS (AP) — Sam Merrill grew up a Utah State Aggies fan. Eight years ago, Merrill attended the last Aggie conference tournament championship against Boise State a few miles away at the Orleans Arena when the team was part of the Western Athletic Conference.

On Saturday, Merrill and his Aggie team found themselves in the Mountain West Conference championship at the Thomas & Mack Center. Merrill and his teammates were determined to make their own history.

Merrill scored 24 points, going 11 of 12 from the free throw line and earning tournament MVP honors, as Utah State won its first Mountain West Conference championship with a 64-57 victory over the Aztecs.

"As someone who grew up a Utah State fan and watched them win conference championships and go to NCAA Tournaments, it means the world to me," said Merrill, a junior. "I can't believe it. For those of us who have been here the past few years, it hasn't been easy."

Utah State (28-6) scored the first 13 points of the second half to pull away after leading 34-32 at halftime. The Aggies, who joined the conference in 2013-14, were the No. 2 seeds after sharing the regular-season title with No. 14 Nevada.

Now the Aggies are off to the NCAA Tournament being led by first-year coach Craig Smith who came from South Dakota.

"We flipped the switch at South Dakota after only winning four games and we lost at the buzzer two years ago, and ran into a buzzer last year," said an emotional Smith said. "I wish those guys can feel what we're feeling now. I've been coaching 23 years and I've never seen a group bond together."

Abel Porter had 10 points for the Aggies, who have won 10 straight and 17 of their last 18 games.

Fourth-seeded and defending champion San Diego State got no closer than five points on two occasions after Utah State's run, cutting it to 60-55 in the final minute. But Merrill responded by hitting two free throws with 43 seconds left to seal it as the Aztecs shot 33 percent for the game, 27 percent in the second half.

Devin Watson scored 18 points in a game the Aztecs (21-13) in all likelihood needed to win to make the NCAA Tournament.

"With five minutes left, I said if we can chip it down. I tried to pick and choose our moments," Watson said. "We overcame a lot this year. We had a lot of young guys, guys who have been there before. I'm proud of my teammates."

Even though the Aggies led for 12 minutes, 15 seconds of the first half, there were 10 lead changes and seven ties in the session. Neither team could build more than Utah State's five-point advantage.

"We're disappointed we didn't go this year, but we'll try to put ourselves in a position to get in (the NCAA Tournament) for next year," San Diego State coach Brian Dutcher said. "We got better and that bodes well for the future of San Diego State."

The Aztecs now hold an 11-5 advantage all-time. San Diego State had won 11 in a row before Utah State won in Logan, Utah on Feb. 26. The Aztecs won the earlier matchup Feb. 9 in San Diego. The teams have met twice in the MWC Tournament with San Diego State winning both contests in 2014 and 2016.

Utah State: This was the Aggies' first conference championship game appearance since winning that WAC title in 2011. Merrill became the seventh Aggie to reach 700 points in a season and moved into fifth on the team's career scoring list with his 21st point Saturday.