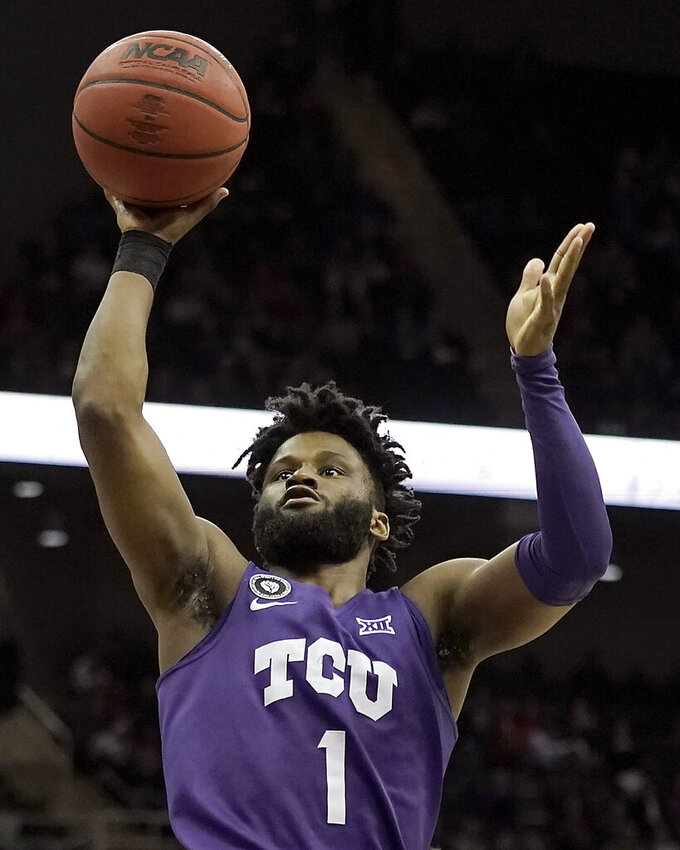 TCU guard Mike Miles shoots during the first half of an NCAA college basketball game against Kansas in the semifinal round of the Big 12 Conference tournament in Kansas City, Mo., Friday, March 11, 2022. (AP Photo/Charlie Riedel) 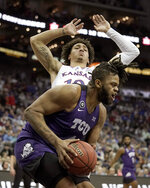 KANSAS CITY, Mo. (AP) — Ochai Agbaji curled off a screen and was wide open for a rim-rattling ally-oop dunk, the inbound play perfectly executed if only Kansas teammate Dajuan Harris had lofted him the ball in the Big 12 quarterfinals.

This time, Agbaji soared through the air of T-Mobile Center and caught Harris' pass well above the rim, throwing it down with a one-handed slam. It punctuated a 22-point performance by the Big 12 player of the year, and a 75-62 victory over the Horned Frogs that sent the Jayhawks into Saturday night's championship game.

“It kind of happened so fast. It didn't really set in until I was at half court and everyone was going crazy,” Agbaji said. “I just watched reply of it and it was crazy. That was just a really good pass.”

One that should have been delivered the previous day, too.

“We've run it a few times,” Jayhawks coach Bill Self said. “I got into him for not throwing it — he was even more open yesterday than he was today. But 'Juan threw a perfect pass and Och gave it a pretty good finish.”

It was a pretty good game all around for the Jayhawks (27-6), who will play Texas Tech for their 16th league tournament title and 12th in the Big 12 era. Mitch Lightfoot added 15 points while getting extended minutes in place of injured big man David McCormack, and Remy Martin had 10 points in a confidence-building performance of his own.

“I felt great just being out there, doing anything I can to contribute to the win,” said Martin, the Arizona State transfer who has battled injuries all season. “I'm here to win a national championship. I'm here to win the tournament.”

Chuck O'Bannon had 15 points to lead TCU (20-12), whose own NCAA Tournament resume includes five wins over ranked teams this season. Mike Miles shook off a shooting slump to add 14 points for the Horned Frogs.

“I anticipated us playing better than we did but they really took it to us, a far more physical team than us tonight, far more aggressive,” TCU coach Jamie Dixon said. “I like how we battled and stayed with it, but it just wasn’t our night.”

The Horned Frogs and Jayhawks played two tough games just last week, thanks to a COVID-19 rescheduling. They split them, with each team winning at home, but the Jayhawks needed every bit of Allen Fieldhouse magic that they could muster to escape with a 72-68 win in Lawrence.

There weren't any problems — matchup or otherwise — in the Big 12 semifinals.

TCU scored the game's first four points, but Kansas soon pulled ahead 10-9 on Braun's 3-pointer. That was the start of an 11-0 run that forced Dixon to call timeout.

Kansas also had five- and six-point bursts to extend the lead later in the first half, and the Jayhawks cruised into the locker room with a 44-30 advantage.

The dominance came largely at the defensive end, where Kansas forced three shot-clock violations in the first half.

The Jayhawks forced another in the second half after TCU had narrowed the gap to 54-44 with about 16 minutes to play. The Jayhawks answered with eight straight points, the last two coming from Martin after a shot-clock violation, and that gave Self's squad all the room it needed to cruise through the final 10 minutes and into the title game.

“They're a great team, they have great players — Agbaji is great,” Miles aid. “You have to give credit to them. They just played better than us.”

TCU secured its fifth 20-win season under Dixon with a 65-60 win over No. 22 Texas in the quarterfinals, a win that almost certainly clinched the Horned Frogs' at-large bid for the NCAA Tournament. It would be their first since the 2017-18 season, when they ended a 20-year drought but were dumped in the first round.

Kansas only committed six turnovers for the entire game, while the Jayhawks turned 18 of them from TCU into a 23-4 edge in points off turnovers. That was more than the difference in the outcome of the game.

The Jayhawks make their 15th appearance in the Big 12 title game against the Red Raiders.