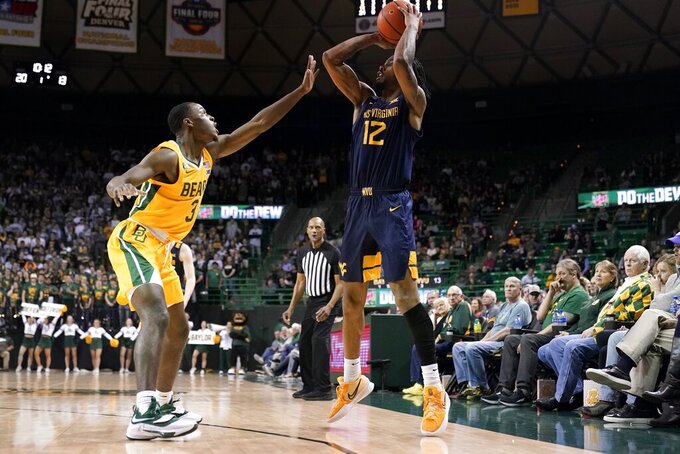 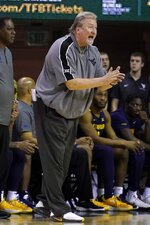 WACO, Texas (AP) — James Akinjo scored 25 points and Matthew Mayer came up big with all nine of his points late for eighth-ranked Baylor. West Virginia had to get through the final minutes without standout guard Taz Sherman.

Mayer didn't score until his tiebreaking layup with 3:27 left put the Bears ahead to stay in their 81-77 victory Monday night. That came soon after Sherman, who had a career-high 29 points with six 3-pointers, left the game woozy.

“We competed like crazy today. I mean, we competed," Mountaineers coach Bob Huggins said. “We hung in there with our best player, and one of our best players, if not the best player in the league, laying in the locker room with a concussion.”

Sherman, who had tied the game at 66 with his jumper on West Virginia's previous possession, appeared to take a shot to the face and side of the head from the arm of Jeremy Sochan when trying to make a move around the defender. Play continued with Sherman still on the floor, and he was still down during a timeout after Sochan was called for a charging foul when out of control going the other way.

Sherman, a Texas native, did give a thumbs up from his Twitter account soon after the game.

The Bears (19-3, 7-2 Big 12) finally took the lead for good when Sochan made a steal in the backcourt and passed ahead to Mayer, who seconds later got the rebound after Sochan missed two free throws and made a strong inside basket. Mayer later added a 3-pointer.

“Matt’s a senior, and you want all the guys to play well, but especially your seniors. You hope when you’re short-handed that they step up,” Baylor coach Scott Drew said. “We could turn that light off and on. And the off was most of the game for him. And then when it was on, you’ve really got to credit him, because he made tough plays."

Sochan finished with 13 points and nine rebounds as Baylor bounced back from a loss at Alabama in the Big 12/SEC Challenge. Jonathan Tchamwa Tchatchoua had 14 points.

The Bears were without injured guards Adam Flagler (knee) and LJ Cryer (foot). Flagler is a starter averaging 12.7 points a game and Cryer, their leading scorer at 13.9 points a game, missed his second game in a row.

Both of those 3s by Sherman, the first getting the Mountaineers within 30-28 and the other putting them ahead by one, followed missed 3s by Baylor.

Baylor: With injured players in and out of the lineup since Big 12 play started, Drew and the Bears have found it hard to develop a rhythm in their rotation. Along with the two guards out Monday, Akinjo had missed two of the previous four games after a hard fall on his tailbone, while Sochan played only his third game after missing four in a row with an ankle issue.

“It’s frustrating, because you’re 15-0 when you have everybody,” Drew said. “And then you get people back and you lose people. And a lot of times you found out the day of the game they can’t go, so it’s not like you get prep time. Anyway, we’ll keep grinding.”

Baylor marked the 95th anniversary of the Immortal Ten with current players wearing on their back of their jerseys the names of the 10 players, coaches and fans killed in 1927 when the team bus carrying 22 people was hit by a train while traveling to Austin.

Baylor: At No. 10 Kansas on Saturday.