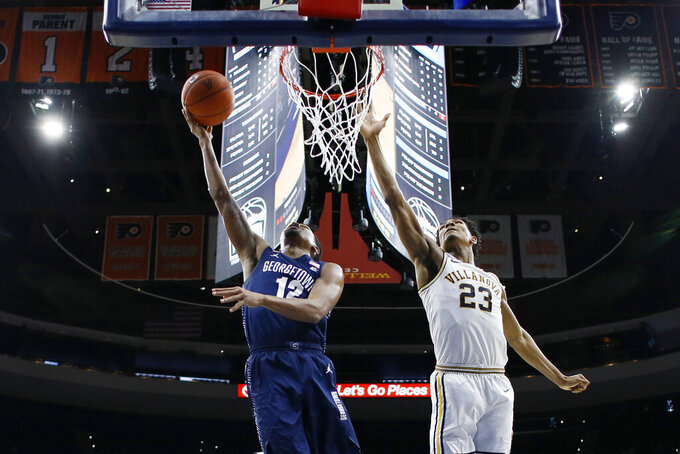 Georgetown's Terrell Allen, left, goes up for a shot against Villanova's Jermaine Samuels during the first half of an NCAA college basketball game, Saturday, Jan. 11, 2020, in Philadelphia. (AP Photo/Matt Slocum)

PHILADELPHIA (AP) — Saddiq Bey hit eight 3-pointers and scored a career-high 33 points to lead No. 16 Villanova to an 80-66 win over Georgetown on Saturday.

Bey, a 6-foot-8 sophomore forward, hadn't been much of a 3-pointer shooter this season for the Wildcats (12-3, 3-1 Big East). He'd made only 21 and four of those came in a nonconference game against Ohio. He shot just 3-for-10 overall in a win this week at Creighton, hardly a sign he was about to bust out with a career game against the Hoyas (11-6, 1-3).

Left open, and determined to shoot, Bey had a day to remember. He carried the Wildcats early as they coasted toward their eighth win in nine games. Bey had seven 3s and was 9-for-12 overall from the floor when the Wildcats led 56-49; the rest of the team was a combined 9 of 30.

Bey was in Georgetown's backyard as a four-star prospect at Washington's Sidwell Friends. But he never had much interest in the Hoyas and originally signed with North Carolina State before he asked for a release from his letter-of-intent.

The Wildcats pounced, another shrewd pickup for Jay Wright, saluted by the Wildcats on Saturday for his Associated Press men's coach of the decade selection. Bey finished 10 of 15 from the floor, including 8 of 10 on 3s, and made five free throws.

The Wildcats averaged 7.3 3s a game and blew that number out of the stat sheet before most fans were settled in their seats. They made 10 3-pointers on their first 12 baskets and played with desire to push the ball inside. They one time they did, Jermaine Samuels converted a three-point play - of course, three points -- to send the Wildcats into the break up 39-36. Samuels' free throw was the only one of the half for the Wildcats.

Georgetown coach Patrick Ewing called a timeout just 30 seconds into the half after Jeremiah Robinson-Earl hit a jumper and Bey made a 3 that kept the Wildcats rolling.

Georgetown: Ewing still has a long ahead of him to make the Hoyas winners.

Villanova: The Wildcats kept on winning to open a stretch of four straight home games.