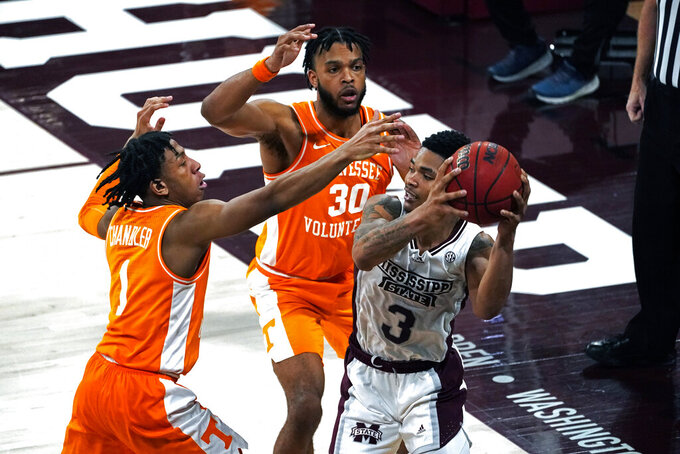 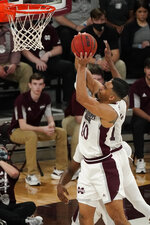 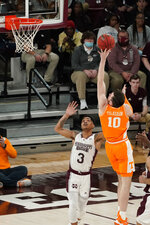 STARKVILLE, Miss. (AP) — Josiah-Jordan James and Kennedy Chandler each scored 18 points and No. 19 Tennessee outscored Mississippi State 11-2 in the final three minutes for a 72-63 victory on Wednesday night.

The second half went back and forth and was tied at 61 before the Volunteers (17-6, 8-3 Southeastern Conference) closed strong for their sixth consecutive league victory. Zakai Zeigler iced the win by making all four free throws in the closing seconds to finish with 11 points along with Santiago Vescovi.

“We knew they were gonna pound it inside,” Tennessee coach Rick Barnes said. “We fouled way too much early, but you’ve got to give them credit for that. They put such intense pressure on you inside. We knew that those shots in there, they get them on the glass, it was gonna be a high-level, physical game around the rim.

“But overall I thought our guys really battled, especially the last four minutes, trying to come up with those loose-ball rebounds.”

Iverson Molinar had 16 points for the Bulldogs (14-9, 5-5), who dropped their first SEC home game this season. Garrison Brooks had 15 points and eight rebounds while DJ Jeffries had 13 points.

Tennessee sizzled in the opening minutes, making its first six shots for a 14-2 lead following a 3-pointer by Josiah-Jordan James. Mississippi State slowly crept back into the game late in the half with a 10-1 run to lead 28-27 lead thanks to a Molinar 3-pointer, before the Vols recovered for a 35-33 halftime advantage.

“Obviously, a really tough loss,” Mississippi State coach Ben Howland said. “We had a one-point lead going into the last five minutes. Then we give up an open 3-pointer on an inbounds play that we did not switch on.

“They started face-guarding Iverson the rest of the game and took him out of the game. Zeigler and Chandler were really good defensively tonight and they created a lot of havoc.”

Tennessee finished 49% from the field after shooting just 41% in the first half. The Vols also made 4 of 6 from deep after halftime to finish 8 of 19. The Volunteers had just three first-half turnovers and held a 17-16 rebounding advantage.

Mississippi State shot 50% overall and made 10 of 13 at the foul line. The Bulldogs also had eight turnovers in the first half and 16 overall.

The Bulldogs outrebounded Tennessee 28-26 but the Vols had 13 steals. Tennessee topped the Bulldogs for the eighth time in nine meetings.

Tennessee: The Volunteers have rolled since a 2-3 start in SEC play. They played their first game without starting power forward Olivier Nkamhoua, who suffered an ankle injury last weekend against South Carolina.

Mississippi State: The Bulldogs put themselves in a rough spot now after dropping their first SEC home game. They're 12-2 at home this season and 0-4 in SEC road games.