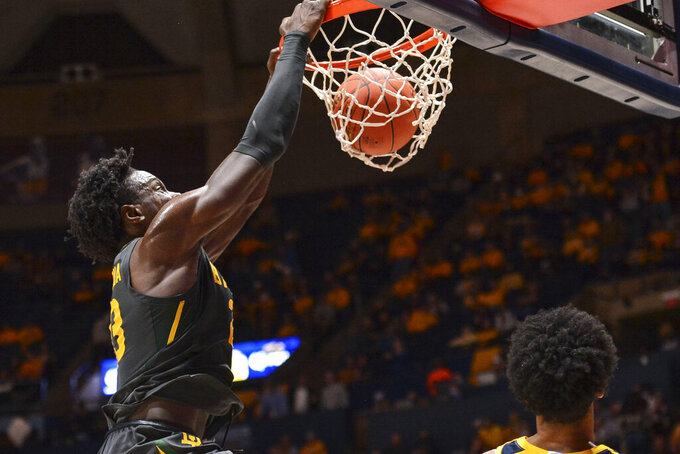 MORGANTOWN, W.Va. (AP) — Despite its recent struggles at home, Baylor still knows a thing or two about winning on the road, even when short-handed.

LJ Cryer and Matthew Mayer each went on a 3-point tear to set a career high for scoring, and No. 5 Baylor snapped a two-game losing streak with a 77-68 victory over West Virginia on Tuesday night.

Baylor (16-2, 4-2 Big 12) bounced back after losing twice at home and relinquishing the No. 1 ranking. The defending national champion has won 13 straight away from home, including four consecutive true road games.

“This league is one of those leagues you don’t want to be on a losing streak, because nobody feels sorry for you,” Baylor coach Scott Drew said. “You can pick any sport. You lose, you make errors, you lose a little confidence. And you want to get back to winning as quick as you can.

“You miss 3- or 4-foot putts, you better make the next one. Otherwise, them others get tough. And I’m not even a golfer.”

Cryer, a sophomore, scored 25 points in his second start of the season in place of Bears leading scorer James Akinjo, who sat out with a bruised tailbone sustained in Saturday’s loss to Oklahoma State. Freshman forward Jeremy Sochan missed his third straight game with a sprained ankle.

“It just gives us confidence that we can get back on track and win the Big 12,” Mayer said.

Cryer and Mayer combined to hit 10 of 17 3-pointers. Baylor has won three straight in Morgantown.

Mayer “knew he had to be aggressive, knew he had to be assertive on the scoring front to make up for Jeremy and James being gone,” Drew said. “Sometimes people try to press or try to do more, and they do the wrong thing which leads to bad results. He just tried to be really efficient and effective, and he did that.”

Mayer made three free throws after being fouled on a 3-point attempt to put Baylor ahead to stay, 56-54, with 7:35 remaining.

West Virginia was held to four field goals over the final six minutes. Mayer hit a 3-pointer, Flagler made two 3s and Baylor pushed its lead to 71-61 with 3:31 left.

Cryer and Mayer combined for 18 points over the final 12 minutes.

Cryer is “a good player, so good players are going to make good plays and his team definitely needed it because their star point guard was out,” Curry said. “He just stepped up and did what he was supposed to do.”

West Virginia couldn't defend the post or get back in transition defense to start the game, and the Bears took advantage. At one point, Mountaineers coach Bob Huggins inserted little-used Seny N'diaye to try to help, but it only got worse. Flo Thamba, Tchamwa Tchatchoua and Flagler combined for four dunks in less than a five-minute span.

West Virginia couldn't guard Mayer, either. Mayer, who had a season-high 18 points in Morgantown last season as the Bears clinched the Big 12 regular-season title, made three early 3-pointers and Baylor turned an early deficit into a 30-14 lead.

“This is like my favorite place to play,” said Mayer, a senior. “I’ve always had some good games here.”

The Mountaineers finally tightened up their defense and went on a 14-0 run, with seven points coming from McNeil, to pull within 30-28 late in the half and set up a tight contest until the final few minutes.

Baylor: The Bears put together a solid offensive effort despite missing Akinjo, an Arizona transfer who leads the team with 13.9 points per game.

West Virginia: The Mountaineers missed several inside baskets after working the ball into the post during a key stretch of the second half. They were held to 39.3% from the floor (24 of 61).

“What sticks out to me is all the times we had shots from a foot away and we didn't make them in the second half,” Huggins said. “I mean, that's crazy. That's been a habitual problem.”

BETTER AT THE LINE

Baylor plays at Oklahoma on Saturday. The Bears beat the Sooners 84-74 earlier this month in Waco, Texas.