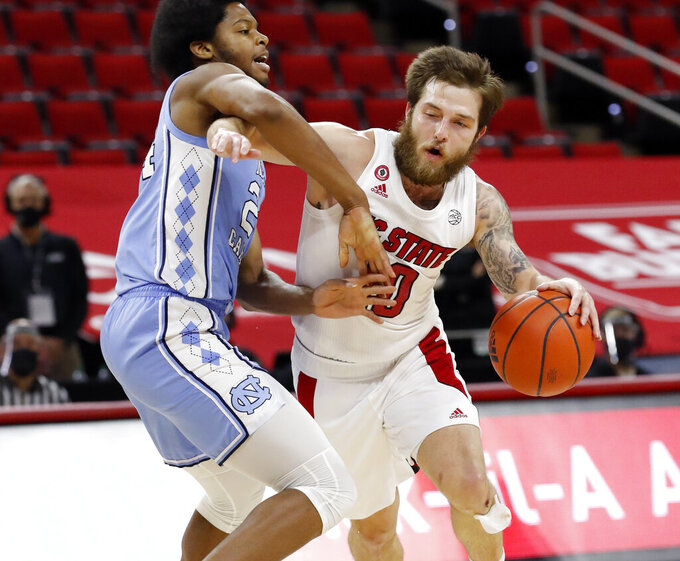 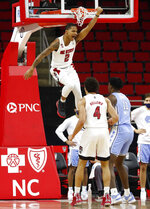 RALEIGH, N.C. (AP) — Devon Daniels and North Carolina State built a big lead against 17th-ranked rival North Carolina, only to squander most of that margin. The Wolfpack nearly did it again down the stretch.

Daniels had 21 points in the Wolfpack’s 79-76 win Tuesday night in the Atlantic Coast Conference opener for both teams, helping N.C. State earn a rare win in a rivalry long dominated by the Tar Heels.

Freshman Shakeel Moore scored 17 points for the Wolfpack (5-1, 1-0 Atlantic Coast Conference), who saw a 17-point first-half lead slip all the way to one with about 8 1/2 minutes left. Then, after mounting a tough-minded response behind Daniels, N.C. State saw a 13-point lead with 5:13 left whittled again to give the Tar Heels (5-3, 0-1) a chance to force overtime.

“I'm proud of my team, and I thought we fought for 40 minutes,” Keatts said.

When the horn sounded, N.C. State had beaten UNC for just the fifth time in 37 meetings. It also ended the Tar Heels’ seven-game wining streak on the Wolfpack’s homecourt.

“We've been hammering them pretty good for several years,” UNC coach Roy Williams said. “They're tired of that. I think the difference in the game to me was their sense of urgency early in the game."'

Armando Bacot scored 16 points to lead the Tar Heels, who finished with 18 turnovers that led to 19 points for the Wolfpack.

UNC: The Tar Heels continue to put themselves in big first-half holes. They fell behind by 16 in losses to No. 4 Iowa and No. 10 Texas, and rallied from double-digit deficits in wins against UNLV, North Carolina Central and Kentucky. This time, they fell behind 46-29 with 3:56 left before halftime, then spent the rest of the night fighting uphill.

“We just seem to can't get a good start versus anybody, maybe other than the first game," Bacot said. "We've just been coming out real flat and just not playing hard, and then we get down and that's when we play harder.”

N.C. State: This was the Wolfpack's third game after a two-week pause due to coronavirus issues. But N.C. State started fast by making 11 of 16 shots to get out in front and stay there, while Daniels had a run of eight straight points during a 14-2 run after the Tar Heels had closed to within 63-62. That lead grew to 77-63 on Thomas Allen's layup before the Wolfpack had to hold off one more UNC rally to the horn.

“We got in a rhythm in the first half, right out of the gates,” Daniels said, who noted later: “Just during the game, I could feel the growth with this team.”

“We knew that he was going to have to play against four guys that were 6-10 or better, but he did a tremendous job,” Keatts said. “I thought he held his own.”

“I just stayed vertical,” Bates said. “I didn't want to jump too much” for blocks.

Moore hadn't scored more than nine points so far, but made 6 of 11 shots with three 3-pointers and one highlight-reel dunk along the right baseline in the second half.

“Fearless, tough — didn't know he was playing UNC,” Keatts said of the 6-1 guard.

This was the earliest meeting in the longtime rivalry since the 1979-80 season, and it lacked the Wolfpack's normally rabid home crowd due to the coronavirus pandemic. ... UNC had five players in double figures, but preseason ACC player of the year Garrison Brooks (10 points) made just 5 of 14 shots. ... UNC shot 44% while N.C. State shot 47%. ... The Tar Heels made 2 of 12 3-pointers, while the Wolfpack made 8 of 17 — with six before halftime.