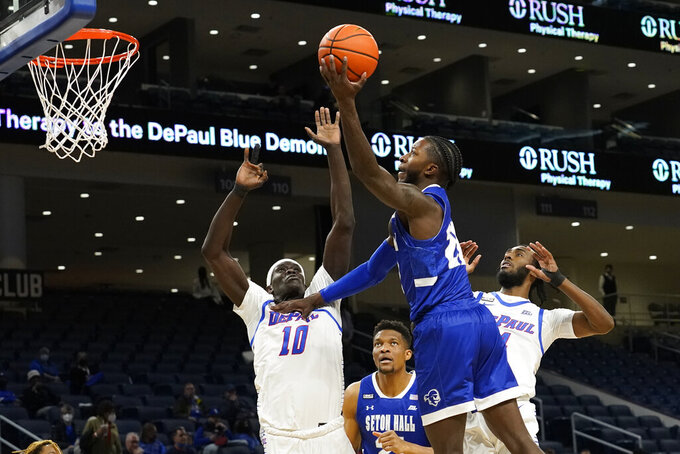 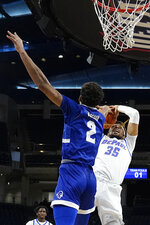 Javon Freeman-Liberty also scored 12 points, giving the Blue Demons (10-6, 1-5 Big East) easily their biggest win of the season. Freeman-Liberty, the conference’s leading scorer, aggravated a groin injury he had been playing through early in the second half and limped off the court. He returned shortly after, but played sparingly down the stretch.

Despite losing their best player, the Blue Demons still hung on to secure a much-needed signature win.

“I’m proud of the team and the resilience that they showed,” DePaul coach Tony Stubblefield said. “Obviously, we’ve been hit with some adversity. Our guys have had the sticktoitiveness, where they stuck together as a team, stayed positive and just continued to try to get better. That’s something we’ve been preaching to these young men.”

The loss serves as a significant setback for the Pirates (11-4, 2-3) as they attempt to gain ground in conference standings. Jared Rhoden led Seton Hall with 25 points, with Bryce Aiken adding 22 more.

The Blue Demons were upset-minded right from the get-go. Freeman-Liberty scored six quick points in the first five minutes, helping DePaul open the half on an 18-6 scoring run. The Blue Demons also tallied seven first half steals.

“We came out and reverted back to taking too many pull-up jumpers,” Seton Hall coach Kevin Willard said. “It’s mind boggling some of the shots that we take. This is a good group, and they have a lot of heart, but I just don’t know if we had the level of respect that we should’ve had for a very good DePaul team.”

Seton Hall clawed back to within six, but was unable to trim its deficit any further. Jones scored two breakaway layups off a pair of steals in the final two minutes of the first to boost DePaul’s lead to 16. Freeman-Liberty added two free throws to give the Blue Demons a 52-35 advantage at halftime.

Freeman-Liberty’s injury initially threatened to derail DePaul’s momentum in the second half, as did a pair of early baskets from Rhoden and Tray Jackson. But Terry quickly hit back-to-back jumpers to give DePaul breathing room.

Seton Hall strung together a late rally to cut the deficit to two with 5.8 seconds left, but Terry iced the game for DePaul with a pair of free throws. He attributed his ability to sink the clutch shots to a recent practice session.

“At practice, coach made us shoot 50 free throws,” Terry said. “I shot 50 for 50. The way you practice translates to the game.”

The Blue Demons led for all but 31 seconds of the game and never trailed.

DePaul: The Blue Demons desperately needed to halt the five-game skid that derailed a strong start to their season. It’s hard to find a more emphatic way to do so than prevailing over a Top 20 opponent. DePaul still has work to do if it wants to make something of the rest of its season, but with three of its next five opponents currently ranked in the Top 25, it has a chance to build off this win in a big way.

Seton Hall: The Pirates were hit with a crushing blow just as they were rebounding from tight losses to Providence and Villanova. This defeat threatens to undo the work Seton Hall put in to regain some ground in the rankings after nearly falling out of the Top 25. The Pirates will need to regroup quickly as they prepare to host a rematch with No. 23 Providence next week.

Seton Hall: Just as the Pirates were climbing back up the rankings, they suffered a loss which could land them outside the top 25. The defeat may not have done major damage had it taken place back in December when this game was originally scheduled and the Blue Demons were 9-1. However, DePaul having lost five straight ahead of Thursday could result in the loss having a much more significant impact on Seton Hall’s rank.

DePaul: As triumphant as Thursday’s win was for the Blue Demons, they still need to add more signature victories to their resume if they want to receive attention from the voters. But if they needed proof they were capable of such a thing, topping Seton Hall should provide plenty of that.

DePaul: Hosts No. 17 Xavier on Wednesday in its second straight game against an opponent currently ranked in the top 25.