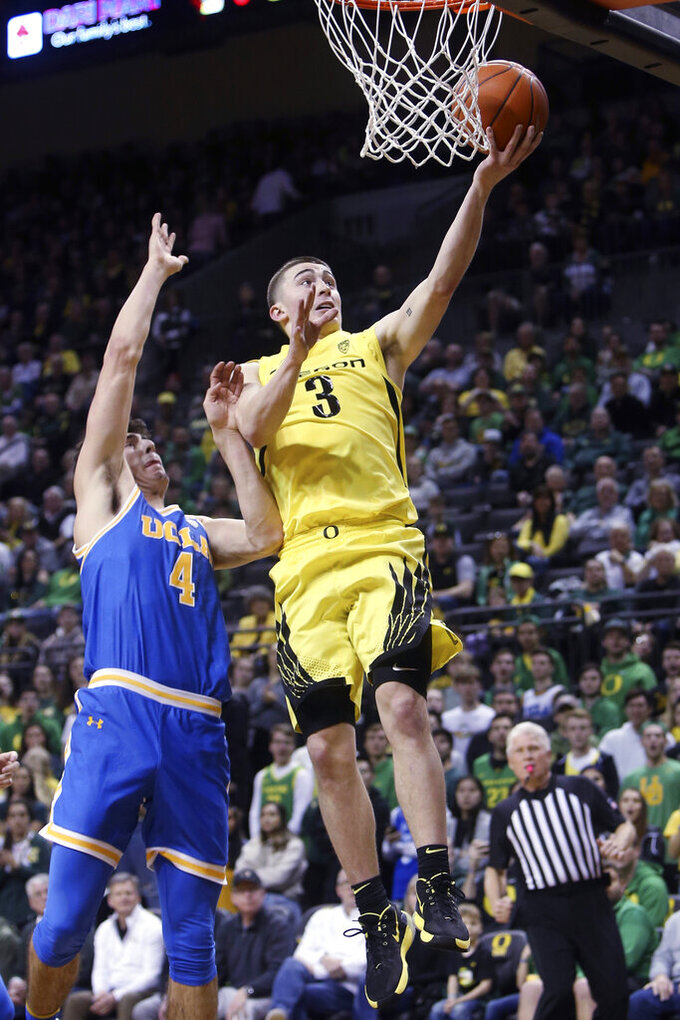 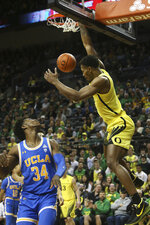 EUGENE, Ore. (AP) — UCLA was in a giving mood and Oregon was only too happy to be on the receiving end.

The 12th-ranked Ducks took advantage of a season-worst 23 turnovers by the Bruins to score 34 points and went on to a 96-75 victory Sunday, the largest winning margin for Oregon in the series since 2003.

“To go on the road against the 12th-ranked team in the country, (with the) best point guard in the country and turn it over 23 times, you’ve got no chance,” UCLA coach Mick Cronin said.

Chris Duarte led the Ducks with 24 points and also had six of Oregon’s 15 steals to go with six rebounds and five assists. That followed Duarte’s game against USC on Thursday in which he scored 30 points with 11 rebounds and eight steals.

“We definitely need that from him,” Oregon’s Payton Pritchard said. “Chris has a special talent and defensively this week he’s shown what he’s capable of.

“We’ve got to hold him to that standard because this team needs that.”

“It’s a great lesson for our team,” Cronin said. “You don’t defend, you don’t take care of the ball, you’ve got no chance ... the turnovers completely changed the game because it got them feeling good and it’s a lot easier to make shots when things are rolling.”

“Every team we play, we’re going to try to get up into them and make thing happen at the defensive end,” Pritchard said.

So certainly the Bruins weren’t surprised by Oregon’s defensive tactics.

“We let it affect us,” Cronin said. “We played sideways. When you play sideways and telegraph your passes and play sideways against the press, teams don’t have to protect the rim, so they just come harder and harder up.

“We really dedicated most of our practice to it, which is the most disappointing thing. But then again, it’s a little different practicing than with people in the stands and we looked like a really young and inexperienced team out there, which is disappointing. I know we are, but I was hoping we were past all that.

Oregon jumped out to a 21-9 lead by scoring 14 consecutive points, helped mightily by seven UCLA turnovers during that span. Pritchard had 10 points in the first nine minutes, including a pair of free throws after a technical foul on the Bruins for having six players on the court after a timeout.

“I started yelling at the ref ... ‘they have six,’” Pritchard said. “You can catch that quick, figuring out where people are. There’s too many people to cover.”

UCLA committed 10 turnovers in the opening 10 minutes, and 14 by halftime, leading to 20 Oregon points as the Ducks took a 48-26 lead. There was an 11-0 spurt for the Ducks that included a trio of 3-pointers, and the lead reached 43-18 after 3s by Duarte and Pritchard on consecutive possessions.

Oregon: The Ducks have clinched their 10th consecutive winning record, the first time Oregon has done that for a decade since the 1923-32 seasons. It also means UO coach Dana Altman has recorded his 23rd consecutive winning season (at Creighton and Oregon), an active streak only five other Division I coaches have currently. It was also the 98th win for Pritchard, the most ever by a UO player.

Oregon: At California on Thursday, the first of three consecutive road games.