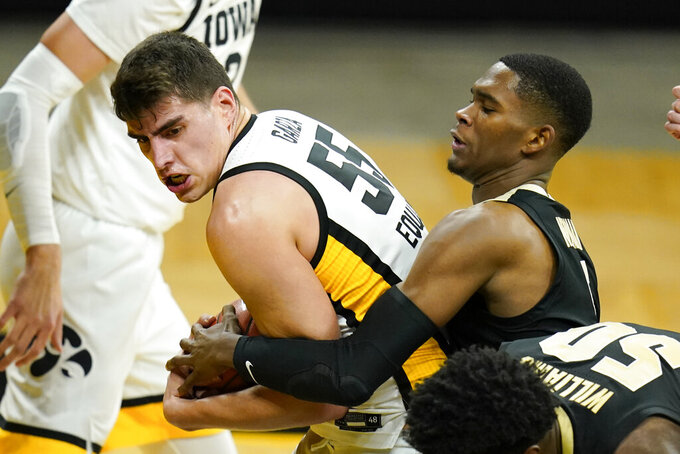 IOWA CITY, Iowa (AP) — Offense has spurred No. 4 Iowa's hot start this season. The Hawkeyes ramped up on defense and rebounding to open Big Ten play.

Luka Garza scored 22 points, Joe Wieskamp added 17 and Iowa beat Purdue 70-55 on Tuesday night in the lowest scoring game of the season for the Hawkeyes, who entered leading the nation with 98.7 points per game.

Iowa outrebounded Purdue 37-35 and held the Boilermakers to 39.7% shooting and their second lowest scoring output of the season.

“It was an impressive win for us, and an impressive effort for us in a lot of areas,” Garza said. "It was just a good effort, all around.”

“It was by far our best effort on the glass and defensively,” Iowa coach Fran McCaffery said. “We outrebounded them, which is hard to do. Purdue is always a terrific rebounding team. We had to stay connected, and we had to keep the effort and intensity."

“We’re a veteran team,” Garza said. “We know what it’s like to take a loss, and then have a short stretch into the next game. We knew we had to flush it, learn from it, and take those things into the next game. We did that tonight at a really high level. Defending and getting rebounds tonight, that was one of the best efforts we had.”

Garza has scored 20 or more points in 17 consecutive Big Ten games, the longest streak in the conference since Ohio State’s Dennis Hopson had 16 in 1987. Garza was 7 of 14 from the field, including 4 of 8 in 3-pointers.

“We had a slow adjustment at times, and he knocked down some shots,” Purdue coach Matt Painter said. “He’s a fantastic player. He’s worked so hard. I love seeing guys develop and improve and work hard.”

The Hawkeyes survived some early second-half foul trouble for Garza. He picked up his third foul with 16:34 to play and sat for more than five minutes, but Iowa outscored Purdue 11-9 in that stretch to take a 58-44 lead. The Boilermakers got no closer than seven points after that.

“Just a lack of execution,” Painter said. “Just a lot of little things, whether that’s being able to step up and get a catch, or screening, or running a play right. Our execution wasn’t very good. We have to do a better job of getting into position to get quality shots.”

“We were playing from behind today,” Purdue guard Sasha Stefanovic said. “It was a struggle to get going.”

Garza moved into third place on Iowa’s career scoring list at 1,786 points, passing Greg Stokes (1,768 points) and Acie Earl (1,779). Roy Marble is the program’s career scoring leader at 2,116 points. Aaron White is second with 1,859. “I think as I look at some of the guys I’ve coached over the years, and I’ve coached some of the really good ones,” McCaffery said. “The thing that I’m impressed with Luka the most is who he’s doing it against, and recognizing that every team is scheming completely to stop him.”

The Hawkeyes and Boilermakers only play once this season. Purdue had a four-game winning streak in the series and had won five of the last six games against Iowa by an average of 21.2 points.

The Hawkeyes bounced back from the loss to Gonzaga to win their first conference opener since an 83-70 win over Michigan State on Dec. 29, 2015. Purdue, which had its three-game winning streak snapped, plays four of its next six games on the road.

Iowa: At Minnesota on Friday.

Purdue: At home against Maryland on Friday.