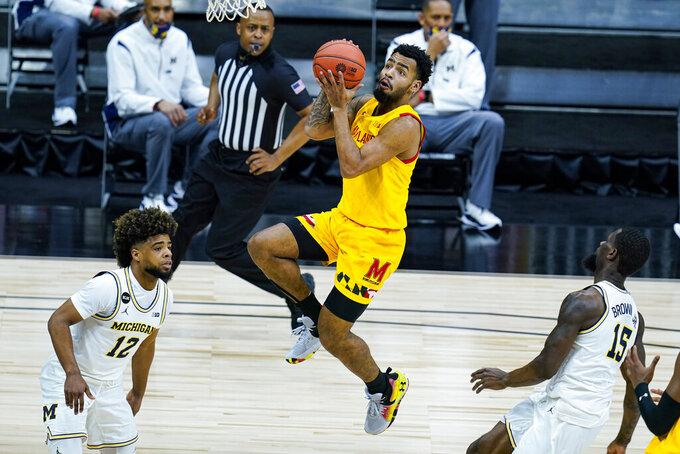 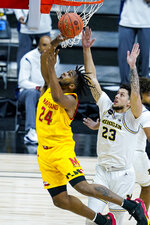 INDIANAPOLIS (AP) — All Michigan coach Juwan Howard intended to do, he said, when he started walking toward the baseline during the second half of Friday’s Big Ten Tournament quarterfinals was question a call.

Maryland coach Mark Turgeon, meanwhile, had already seen enough. He didn’t like what he'd heard during the teams' previous two games and didn’t appreciate the conference's response when he reported his concerns.

Moments after Turgeon told Howard not to speak to him, a shouting match broke out. A tense situation quickly escalated, tempers flared and both teams gathered near midcourt, with officials rushing in to hold back each side.

The 6-foot-9 Howard had to be restrained, drew two technical fouls and was ejected with 10:44 left to play. Minus their coach, No. 4 Michigan pulled away for a testy 79-66 victory.

After the game, Howard apologized for his actions — and also placed blame on the other bench.

“That’s not how you handle things under adverse conditions," he said before explaining his version of what happened.

“He said, ‘Juwan, I’m not going to let you talk to me. Don’t talk to me ever again,’ Then he charged at me. I don’t know how you were raised but the way I was raised is when someone charges you, you defend yourself.”

Turgeon was called for a technical foul but not ejected.

Maryland scored five points after the fracas to cut the deficit in half.

“Coach is a really competitive guy the game got competitive, we knew we had to have his back,” Michigan guard Mike Smith said.

Smith helped steady the Wolverines (20-8) by scoring a season-high 18 points while dishing out a tournament-record 15 assists.

Michigan next faces longtime rival No. 9 Ohio State on Saturday.

Down by 12 early, the top-seeded and regular-season champion Wolverines swung the game by ending the first half on a 16-2 run and starting the second half on an 11-4 spurt.

Franz Wagner and Eli Brooks each scored 16 points as Michigan reached the semifinal for a fifth consecutive time.

Maryland: A strong finish — and Thursday's victory over Michigan State — should be enough to get an NCAA Tournament bid. But shooting 74% from the field through the first 15 minutes, the Terrapins' shooting touch went away and the predictable result was a third straight loss in this season series.

Michigan: After some early jitters, the Wolverines settled down and played their game. Michigan is 7-2 since resuming basketball activities following a COVID-19 shutdown, with six of those wins by at least seven points. The biggest impediment to a tourney title this weekend might be fatigue.

Maryland: Morsell also had six rebounds to become the 33rd player in school history with 1,000 points and 500 rebounds. ... Ayala had five rebounds and Aaron Wiggins had 11 points, seven rebounds and five assists. ... After starting the game 14 of 19 from the field, Maryland went 12 of 35 over the final 25 minutes.

Michigan: Chaundee Brown Jr. had 10 points. ... Brooks made four of Michigan’s 10 3s. ... The Wolverines outscored Maryland 15-0 in second-chance points. ... Michigan is one win away from making its fourth straight appearance in the conference championship game.

Maryland: Will find out its next opponent on Selection Sunday.

Michigan: Will get a rematch with No. 9 Ohio State, the Wolverines longtime rival.