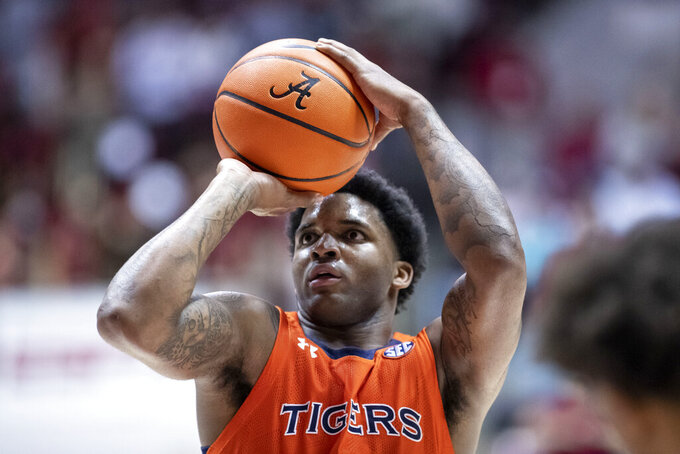 Auburn guard K.D. Johnson (0) shoots a free throw against Alabama during the first half of an NCAA college basketball game, Tuesday, Jan. 11, 2022, in Tuscaloosa, Ala. (AP Photo/Vasha Hunt)

Freshman Jabari Smith and four transfers have help turn Auburn into one of the nation's hottest teams.

Led by the potential No. 1 NBA draft pick Smith, Pearl's fourth-ranked Tigers (15-1, 4-0 Southeastern Conference) have been rapidly ascending the rankings during a 12-game winning streak that’s tied with Davidson for the nation's longest current binge.

The streak is only one shy of the total number of Auburn victories last season entering Saturday night’s game at Mississippi.

The versatile 6-foot-10, 220-pound Smith has lived up to his billing as a top-5 recruit, the highest rated signee in program history.

“I knew he was a great jump shooter, I just didn’t know he was going to be the best jump shooter I ever coached,” Pearl said. "And he wants to get better. I don’t think any level of success is going to change him. He takes coaching.

"When he doesn’t do something and we call him out on it, he’ll get to the next play and try to improve on it. So yeah, he’s absolutely exceeded my expectations.”

The team has fared quite well, too.

Smith has been the centerpiece of the program's instant turnaround, but with plenty of help from four other newcomers. Auburn's rapid rise is also indicative of how well the newcomers have meshed together and with the returning players.

Transfers Walker Kessler, Wendell Green Jr., K.D. Johnson and Zep Jasper have also made significant impacts. Pearl overhauled his roster, and his team's fortunes after one rough season interrupted a run of success that included a Final Four run in 2019.

He helped Auburn hold off a 14-0 rally to beat No. 24 Alabama Tuesday night in Tuscaloosa.

“We’ve basically just made it our motto to stand together no matter what happens,” Smith said. "When Alabama went on that big run, we just all stayed together. Not breaking, not arguing.

“Just knowing there’s four minutes left and we had to go get this win.”

Auburn's biggest victory, perhaps, came when the NCAA didn't tack on much to the program's already self-imposed penalties for violations committed by former assistant coach Chuck Person. Pearl served a two-game suspension for failure to monitor.

Auburn, which opened the season ranked No. 22, sustained its only loss on Nov. 24, falling 115-109 to UConn in double overtime.

The Tigers' four leading scorers are newcomers while preseason All-SEC pick Allen Flanigan missed the first 11 games recovering from surgery on his right Achilles. Flanigan, who has started two of his four games since rejoining the lineup, and fellow returnees Jaylin Williams and Devan Cambridge have seen reduced roles.

“Those are guys that are just used to winning and I feel like are winners,” Smith said. “When I came here, I felt we could turn it around and have something special.”

The influx of transfers and Smith fueled the rise:

— Green, from Eastern Kentucky, has mostly come off the bench but is still averaging 13.1 points and 4.6 assists.

— The 7-foot-1 Kessler, who transferred from North Carolina, is the nation's No. 3 shotblocker while averaging 9.4 points and a team-high 7.3 rebounds.

— Jasper, the starting point guard, mostly splits minutes with Green and is the less flashy alternative. He's averaging 5.3 points and is second on the team with 46 assists.

“They came in and kind of got to know each other, became really good friends, respected each others’ games,” Pearl said. “As the season progresses, if we continue to place winning first ahead of individual numbers and things like that and keep sharing it and keep trying to get better defensively, we’ve got a chance to continue to get better while we’re winning.”

So far, it's what Smith envisioned when he signed with Auburn.

“Everything is going as planned,” he said. “I’m just excited for what’s to come.”